What Can the New Jersey Nets and the Trailblazers Have in Common?

A few weeks ago, The Skanner proposed that new development in the Rose Quarter should lock-in benefits for minorities and low-income Portlanders. We said the building phase should include employment, training and contracting opportunities, while the project also should make a long-term commitment to helping disadvantaged residents by, for example, contributing 1 percent of the Quarter's gross takings to community nonprofits, a great idea from African American Chamber of Commerce President Roy Jay.
Considering what has happened in this state --- the recent report from the Communities of Color Coalition calls Multnomah County "toxic" for minorities -- and considering that African Americans and other minorities have been systematically locked out of wealth creating and sustaining opportunities, we need a strong contract. When TriMet contracted with the Lamar Advertising Agency, they required a minority partner, but once contracted Lamar dropped the partnership. That's not good enough.
Especially since much more could be achieved – with lasting benefits for everyone in our community. 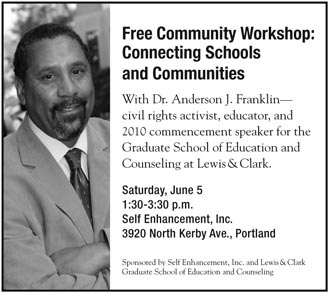 When the Trailblazers reached out for community input on development in the Rose Quarter, Larry Miller, the franchise president heard about the visionary Brooklyn Community Agreement. Miller was impressed by the partnership the Nets and the Brooklyn community developed – with its transparency and inclusion, and with how it raised the bar for business and community working together. We hope the other two development groups interested in the Rose Quarter will join the Trailblazers in a commitment to lift up our community.

Take a look at what the New Jersey Nets and the Brooklyn Community Coalition are doing to leverage the potential of the new arena.

For the long term:
• Housing attached to project 50 percent low and mid-income
• 10 percent of housing for seniors, including provisions for grandparents with children
• A box and 54 seats available for community use, with preference to youth and seniors. Community groups can rent arena at a reduced rate.
• Guaranteed tickets for local schools, partnerships to be created with local schools and 10 education celebrations each year
• Four charter schools to be built with project, as well as a youth center, a childcare center, a senior center and a health center
• A retail space operated by students with profits going to a tuition fund.
• Initiative to train and employ unskilled youth

This project even includes park space and a meditation room. People, we know we are not in New York. But isn't Portland supposed to be the city with vision? Last week the mayor asked the competing developers to work together. Mr Mayor, you should also be making it clear that any agreement MUST include community benefits such as those detailed here. We need a plan that builds some equity into our city.