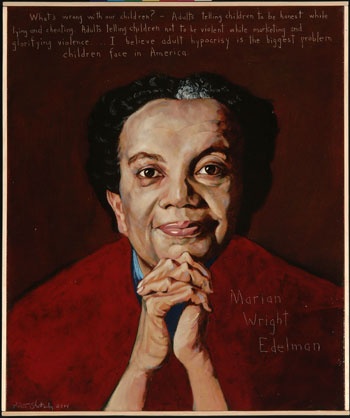 (NNPA) - Adults often start conversations with children by asking them what they want to be when they grow up. We tell them to dream big, and encourage them by giving them pretend doctor's kits, fancy dress-up clothes, and other toys that let them imitate adult life.

Now, imagine you're a parent, and in the middle of your neighborhood, there is a playground. Of course you'd want that playground to be a joyful, creative space. If your neighborhood were a crowded public housing development in the middle of a city, the chance to bring your children to a small outdoor sanctuary where they could stretch their bodies and imaginations would be even more precious. You might hope the jungle gym would include a pretend steering wheel, storefront, or spaceship, like the equipment in thousands of playgrounds across the country. Imagine, then, if instead the "sanctuary" the city provided for your children featured a pretend jail.
That's just what happened in New York City, where for years toddlers living in a violence-racked neighborhood in Brooklyn were encouraged to dream they were in jail at a city-funded playground. When the Reverend Dr. Emma Jordan-Simpson, the executive director of the Children's Defense Fund's New York office, first heard about the design of the playground at the Tompkins Houses in Bedford Stuyvesant this spring, she had to visit and see it for herself. The photographs she took show the shameful truth: sure enough, the center of the play structure featured a bright orange square with the word "JAIL" in bold capital letters, cutout bars on a pretend window, and the image of an exaggerated lock on a child-sized door. She immediately called a local reporter to add her voice to the parents and community advocates demanding to have the playground jail removed. As soon as the story began receiving media attention, workers quickly arrived to try to paint over the words and images. But the damage had already been done.
The city's response after the news coverage about the playground came only after a long struggle and disgust among parents. A spokesperson for the mayor said no one in the community had complained earlier about the play jail, but residents said that wasn't true; they had spoken up, but no one was listening to them. One mother even recalled painting over the word "jail" herself twice, only to have workers restore the offensive label both times. Just as troubling as the jail's presence was the question of why in the world the decision was made to build a pretend jail for the Tompkins Houses playground in the first place.
Playground designers said among the hundreds of structures they had seen, they couldn't remember another jail. City officials said they couldn't determine who originally ordered it or why, but for its opponents this didn't feel like an accident. The Children's Defense Fund's Cradle to Prison Pipeline® Crusade has been sounding the alarm about our nation's pipeline to prison, and the toddler jail at the Tompkins Houses looked and felt like a literal symbol of this crisis.
The most dangerous place for a child to grow up in America is at the intersection of poverty and race despite a gifted African American President and Oprah Winfrey reigning over the airwaves. Nationally, one in three Black and one in six Latino boys born in 2001 are at risk of imprisonment during their lifetime. While boys are five times as likely to be incarcerated as girls, there also are a significant number of girls in the juvenile justice system and their rate is growing.
This rate of incarceration is endangering countless children at younger and younger ages, and disproportionately affecting youths of color from impoverished communities. This is America's pipeline to prison — a trajectory that leads to marginalized lives, imprisonment, and often premature death. The Tompkins Houses are in a neighborhood that is one of the largest feeders into New York's juvenile justice system, a system where Black children in New York City are 32 times more likely to be incarcerated than White children. The children who live there are already at risk of entering the pipeline to prison themselves. Giving them a pretend jail to start playing in as preschoolers seems to symbolize that some adults in power have already given up on trying to save them. That's something we can't ever allow to happen.
The play jail may be gone now but the real jails are teeming with our sons and brothers and fathers. We still lack enough positive structures needed to help shape these children's lives and help them play college and doctor and engineer. They lack preventive supports and access to quality early childhood development and education services and accessible, comprehensive health and mental health coverage though the Administration's budget and stimulus investments give us new tools.
The systems that provide such services need to be fixed as well. In New York, the state juvenile justice system is not only broken, it is a hugely expensive program that almost guarantees re-arrest and re-incarceration. At a cost of almost $210,000 a year per youth, and a re-arrest rate of 75 percent within three years of release, New York is funneling money into one of the surest pipelines to the adult prison system. But there are proven solutions that provide better outcomes for children and cost 15 to 100 times less. In these budget strapped times, we should be investing in quality community alternatives that work, especially since most of our youth are jailed for nonviolent offenses.
We know what works. It's time for all of us to focus on strategies for dismantling the real pipeline to prison for good.


Marian Wright Edelman is president of the Children's Defense Fund whose Leave No Child Behind® mission is to ensure every child a Healthy Start, a Head Start, a Fair Start, a Safe Start and a Moral Start in life and successful passage to adulthood with the help of caring families and communities. For more information go to www.childrensdefense.org.