School Bullying Is Killing Our Children 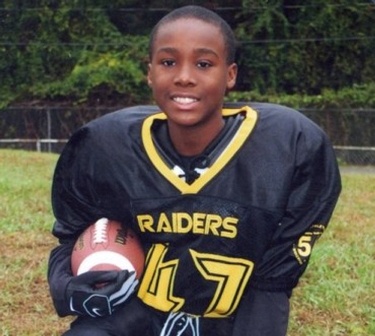 (NNPA) - One year ago, I was an ordinary working mom, looking after my family and doing the best I could as a parent. But on April 6, 2009, my life changed forever.
While I was cooking dinner for my four children, my son Carl Joseph Walker-Hoover excused himself and went to his room. When I checked on him, I imagined he would be doing his homework or playing video games. Instead, he was hanging from an extension cord tied around his neck. He was only 11 years old.
Carl liked football and basketball and playing video games with his little brother. He loved the Lord and he loved his family. What could drive a child to take his own life?
That question haunts me to this day. I will probably never know the answer, but what we do know is that Carl was being bullied relentlessly at school. He didn't want to tell me what was bothering him, but I kept at him, and he finally told me that kids at school were pushing him around, calling him names, saying he acted "gay," and calling him "faggot."
While my heart instantly broke for him, I was furious that he was being subjected to this treatment. Immediately, I called the school and I expected they would be just as upset as I was. But instead, they told me that it was just ordinary social interaction that would work itself out.
I desperately wish they had been right.
I did everything that a parent is supposed to do: I chose a "good" school; I joined the PTO; I went to every parent-teacher conference; I called the school regularly and brought the bullying problem to the staff's attention. And the school did not act. The teachers did not know how to respond.
Carl's death devastated me.
So I can't tell you what it meant to me when, only days after Carl died, I received a FedEx envelope that contained a letter from Dr. Eliza Byard, executive director of the Gay Lesbian Student Education Network (GLSEN), an organization that advocates for safer schools for gay, lesbian, bisexual, transgender (LGBT) and straight students. It was the first letter I'd received about Carl's death. And it was such a comfort to hear that I was not alone.
But I have to admit, I was a little nervous because my son Carl didn't identify as gay or straight, he never talked about it. Despite the protests of some of my dearest friends and family members, I trusted my intuition and let GLSEN help me.
Because of GLSEN, I have had the opportunity to share my story and raise awareness about bullying in our schools. After seeing how other children, like my Carl, live in fear every day, it's important to understand that teasing is not mere child's play, especially for children who are LGBT or perceived to be LGBT.
According to a 2007 GLSEN survey, 91 percent of students surveyed said they experienced harassment at school in the past year because of their sexual orientation. 59 percent experienced physical harassment, and 39 percent said they had been physically assaulted. That same study found that 63 percent of LGBT middle school students had heard school staff make homophobic remarks. How can innocent children thrive academically and emotionally in an atmosphere like that? They can't. Bullying is not a gay issue or a Black issue. It's a safety issue and it does not have to be an inevitable part of growing up. Bullying can be prevented. And there isn't a moment to lose.
Educators need additional support and clear guidance about how to ensure that all kids feel safe in school. That is why I have chosen to advocate for the Safe Schools Improvement Act—federal legislation that would make effective anti-bullying policies mandatory in nearly every school in the United States.
And when I say effective, I mean incorporating policies that are proven to reduce victimization and create a greater sense of safety and belonging for all students. These anti-bullying policies would address race and ethnicity, gender, religious affiliations, sexual orientation, gender identity and expression, ability, and any other distinguishing characteristics. Currently, only twelve states and the District of Columbia have enumerated safe schools laws that include protections based on sexual orientation and gender identity. As a woman of deep faith, I know that the only way to ensure that all children are safe is by passing comprehensive federal legislation.
Carl was denied a lifetime of opportunities when his school failed to act. I am committed to making sure that no other young person has to endure what my son went through, and that no other family suffers as mine has. As we approach the one-year anniversary of my son's death, please honor his life by talking to your state's legislators and asking them to pass the Safe Schools Improvement Act.


Ms. Walker resides in Springfield, Mass. To learn more about the effects of school bullying and how to make your child's school a safer place, go to http://www.glsen.org.