Health Care Reform: What Will It Mean for Black People? 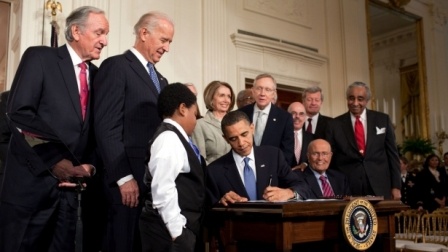 WASHINGTON (NNPA) – It finally passed. The health care bill for which President Barack Obama has vehemently fought almost since Day One at the White House has finally passed both houses of Congress and was headed to his desk for his signature this week.
As Congressional Black Caucus members celebrated the 219-212 vote, the President put the historic moment in perspective on Sunday evening:
"Tonight, after nearly 100 years of talk and frustration, after decades of trying, and a year of sustained effort and debate, the United States Congress finally declared that America's workers and America's families and America's small businesses deserve the security of knowing that here, in this country, neither illness nor accident should endanger the dreams they've worked a lifetime to achieve."
He said, "If you have health insurance, this reform just gave you more control by reining in the worst excesses and abuses of the insurance industry with some of the toughest consumer protections this country has ever known - so that you are actually getting what you pay for.
"If you don't have insurance, this reform gives you a chance to be a part of a big purchasing pool that will give you choice and competition and cheaper prices for insurance. And it includes the largest health care tax cut for working families and small businesses in history - so that if you lose your job and you change jobs, start that new business, you'll finally be able to purchase quality, affordable care and the security and peace of mind that comes with it.
President Obama has fought long for the bill, escalating the battle after the death of his friend and former colleague Sen. Ted Kennedy last year. Kennedy was considered the Senate's champion for health care. The bill passed the Senate on Christmas Eve.
Still, many will now wonder what it all means for African-Americans who suffer the most from low quality health care and health disparities. Members of the CBC say they believe the bill will make significant impact in the Black community.
"We cast our votes for all those people who deserve health care but simply can't afford it. We cast our votes for our senior citizens who will see their prescription drug costs go down. We cast our votes for our children and grandchildren, so that they can live longer, fuller and healthier lives. We cast our votes in the memory of those people who didn't have preventive care and died prematurely," said a statement from Congressional Black Caucus Chair Barbara Lee (D-Calif.), applauding the passage. "We were vocal advocates for provisions in the bill to combat health disparities, illnesses and diseases that disproportionately affect our community. To those who suffer from those health disparities, our vote tonight carries significance similar to the passage of the Civil Rights Act in that it fulfills a dream that has been elusive for far too long and for far too many Americans."
Accordng to a CBC document, other key provisions in the legislation that CBC members fought to have included are:
• Expanded support for community health centers, which play a vital role in expanding access to preventive and other care in our nation's most vulnerable communities.
• Greater support for programs that will increase the racial and ethnic diversity in the nation's health workforce, as well as improved data collection so that we can better measure health inequities and develop solutions to end all health disparities.
• Strengthening the existing Office of Minority Health at HHS, creating new Offices of Minority Health across HHS agencies, and establishes the National Center on Minority Health and Health Disparities at NIH an Institute.
• Inclusion of coverage for resident of the U.S. territories, including a significant infusion of new Medicaid dollars, as well as access to the Exchange so that Americans in the territories will have access to affordable, high-quality health insurance plans.
• Guarantees transparency on rates and enables state insurance commissioners to recommend to the National Insurance Commissioner whether a particular insurer should participate in the Health Insurance Exchange, taking into account excessive or unjustified premium increases in making that determination. This will hold private insurers accountable, ensure affordability and help provide quality coverage for American families.
In addition to significant health care provisions, the CBC also fought for the inclusion of many very important education provisions including:
• Invests $35 billion over 10 years to increase the maximum annual Pell Grant to $5,550 in 2010 and to $5,975 by 2017.
• Invests $2.55 billion in Historically Black Colleges and Universities and Minority-Serving Institution
• Invests $2 billion in a competitive grant program for community colleges to develop and improve educational or career training programs.
• Saves taxpayers $61 billion over by switching to the less expensive Direct Loan program.
House Majority Whip Jim Clyburn (D-S.C.) also applauded the long-awaited passage. "Despite deafening protests from the other side, the nonpartisan Congressional Budget Office said the reforms included in this bill will reduce our deficit by $143 billion in the first 10 years and $1.2 trillion in the second 10 years. This bill will also create jobs, 400,000 good-paying jobs, reliable jobs, for every year and for small businesses. Small businesses will get a tax break on their health care premiums that will free up money for them to hire 80,000 more employees," he said in his floor speech. "Mr. Speaker, we have debated this issue for several generations. The time has come to act. This is the Civil Rights Act of the 21st Century. Tonight, we will take a significant step to move our country forward."