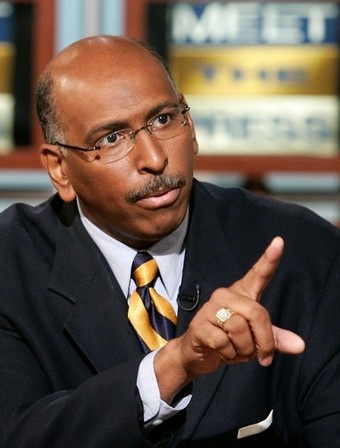 (NNPA) - have heard it all: A black man saying we need to "take our country back." I thought I'd heard it all when the same guy said, "a million dollars is not alot money" after taxes. And before that, when he said he would lure Blacks into the Republican Party with "fried chicken and potato salad," I thought this guy was auditioning for Comedy Central. But then again, most of us understand the strategy here: Put a black face out front, no substance, no power, just image. It's another in a long line of traps – this one is a Steele trap.
For GOP Chairman, Michael Steele, to suggest that someone or some group has taken "our country" and now he and his party must "take our country back," says more about U.S. citizens than it does about Steele. In addition, if we pay very close attention not only to the political speeches, directives, and sound bites, but also to who's doing the talking, it says a great deal about Black people in "our country."
Have you ever wondered who some of these commentators and politicians are referring to when they use the term, "The American People"? Considering some of the things they say, I know full well they are not taking about Black people. Steele refers to "The American People" in his speeches as well, and apparently is caught in his own trap.
Even though he is the so-called leader of the Republican Party, he is denigrated, rebuffed, and scolded like a little boy by his parents for some of the things he says and does. That alone should tell him who is really in control.
It's sad to think Steele believes his own rhetoric, but political status is a strong elixir; it makes him think, and even project that he's in charge. In reality it portrays him as a caricature of ridicule, a black-faced minstrel entertaining the masses with his gaffes and "jokes," while hawking the wares of the Republican Party to Black people. Yes, to Black people, cause White people "ain't paying him no attention."
Of course the Democrats have their own minstrel show too. How many times have you seen members of the Black Caucus, other than the same two or three, speaking on the news shows, commenting on the issues, and really making an impact on policy? The other black face, Harold Ford, is on television and in the news more than those in elected office. Where is Jesse, Jr. these days? Has anybody heard from him? Is he still in office?
With only one Black in the Senate, and it's been that way ever since Black Republican Ed Brooke was elected, you would think Roland Burris would be raising more sand than all the rest of the Senators put together. Seems to me he's just glad to be in the number. At least Moseley Braun spoke out when she was there. Where is our voice?
Michael Steele drank the kool-aid and is now drunk from that kool-aid. He and other Black politicians are drunk with the illusion of inclusion; they are mired in a stupor that has them believing they're walking straight instead of in circles; they are deluding themselves and making every effort to delude us. They are fat and happy, content to serve as props for photo ops, "mannequins," as Rosie Milligan calls them, standing in the background as White folks respond to questions about our future.
Black unemployment is 35 percent to 50 percent, and our collective economic situation is grim, yet our elected officials are sitting pretty with their cushy health care insurance, six-figure salaries, expense accounts, and all the perks that come with their position – a position in which you and I put them. And as Steele said, "a million dollars is not a lot of money – after taxes," so our politicians are raking in more money, by any means necessary in some cases, and laughing all the way to the banks in the Caribbean.
Who is the real prey caught in the political trap? Yes, the Steele trap awaits anyone naïve enough to step into it, but it's so obvious to most Black people, and whites pay little attention to it. I really don't see it as a big threat. Just keep repeating, "It's only a minstrel show, it's only a minstrel show."
The bigger trap has been set by the political puppet masters, the hidden hands, the folks in the shadows. Corporate lobbyists have caused the demise of many elected officials through the enticement of filthy lucre; they are in charge of the traps that ensnare most politicians, black and White. Sadly, Michael Steele and others are easy prey because they think they have been accepted into the club of the political elites. The illusion of inclusion is a terrible thing.
Black political operatives will remain subservient, passive, meek, docile, and deferential as long as they continue to abdicate their authority to address issues that specifically speak to the condition of Black people.
Let us see more Black political leaders on CNN, FOX, and MSNBC. I intentionally did not include BET because Viacom is only interested in showing Black folks, well, you know what I mean. Enough of the nonpolitical talking heads commenting on politics and economics; where are the Black politicians who have a hand in making the decisions?
I don't care what party does it, as long as it gets done. Black folks need genuine, dedicated, authentic political leadership. Let Michael Steele take the country back. Let him serve his fried chicken and potato salad and continue his minstrel show across the country. The perception of power is the real trap; and Michael Steele is hopelessly caught therein. Don't you get caught.


James E. Clingman, an adjunct professor at the University of Cincinnati's African American Studies department, is former editor of the Cincinnati Herald newspaper and founder of the Greater Cincinnati African American Chamber of Commerce. He hosts the cable television program, ''Blackonomics,'' and has written several books, including his latest, Black Empowerment with an Attitude - You got a problem with that? To book Clingman for a speaking engagement or purchase his books, call 513 489 4132 or go to his Web site, www.blackonomics.com