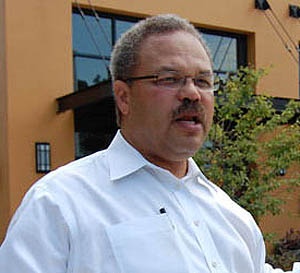 As Multnomah County officials gather tomorrow to announce their appointment for Oregon House District 43, The Skanner News expects that they will choose the most experienced, most knowledgeable and best-connected candidate for the seat representing North and Northeast Portland: Lew Frederick.
While we believe all three candidates would make wonderful lawmakers, there's no question that Lew Frederick has earned his stripes.
As a television reporter in his youth, Frederick was in a position to dig into local stories, issues and policy decisions, while giving a voice to communities that had none.
In his many years as spokesperson for the Portland Public Schools, Frederick took on the difficult task of making sense of educational policy for the city at large. He also learned painful lessons about troubleshooting in government services during dismal economic times – a key lesson for state lawmakers today.
On many occasions we have vehemently disagreed with Frederick when he was at the school district, but in every case he was a master communicator – and isn't that what the legislature is all about?
More recently Frederick's policy consulting enterprise completed a public survey of inner North and Northeast residents regarding area development. Commissioned by the Portland Development Commission, Frederick's report required input from an array of diverse local residents, and compared and contrasted the needs and expectations of neighbors across barriers of race and class. It should be required reading for all policymakers in the state. (Read it at http://www.pdc.us/pdf/future-of-urban-renewal/nnestudy/cac/2009/N-NE-Stakeholder-Interviews-Report-2009-09-16.pdf )
Eddie Lincoln, president of the faculty union at Portland Community College, is a fine man doing important community-building work but so far has no political policy experience.
Karol Collymore is bright and capable, yet has fewer years of actual public policy experience than Frederick. She has worked on many political campaigns, but one clear concern we have is that she is currently on the staff of Multnomah County Commissioner Jeff Cogan, who helps appoint the individual who will fill the house seat. Is this a conflict of interest?
Nevertheless, almost certainly we expect to support Collymore as a candidate in the future should she choose to run for elected office, which we urge her strongly to do. Oregon and Multnomah County need the energies of this bright rising star.
The Skanner News stands firmly behind Lew Frederick for House Seat 43, and we expect Multnomah County Commissioners to appoint this clear choice for experience, knowledge, and dedication.