When Disaster Strikes It's Up to You

Imagine the chaos if a tremendous earthquake suddenly struck the Northwest tonight. What if the quake and its aftershocks were  powerful enough to rip up streets, destroy bridges and buildings and knock out power and water supplies in Portland or Seattle?
It would be devastating for some. But because our local emergency services teams have spent years preparing for a disaster, they would have everything under control in a few hours. Right?
Wrong. The harsh truth is that you will have to take care of yourself and your family for at least three days following a disaster. This holds true for natural disasters such as earthquakes, winter storms or flu epidemics, and also for man-made disasters such as a radiation leak or terrorist attack.
"Before the National Guard or FEMA arrive it's going to take time — it's going to take days," says Linda Swift, emergency preparedness manager with the Oregon Trail Chapter of the Red Cross.  "We always say make a 72-hour kit, but if it was a week that would be better.
"You're going to have to survive for a minimum of three days and possibly more. You won't see the police department or the fire department. Our fire department might be destroyed. People need to realize those things will not be there for them."
Emergency staffers at the state, county and city levels all agree that every one of us needs to prepare for at least 72-hours without government assistance.

"There is that expectation that government will take care of me in an emergency," said Bob Grist, a senior planner with Multnomah County Emergency and Disaster Management. "You can just walk down to the corner and get food and water. It doesn't get there by magic. It takes time to get that kind of assistance effort organized. In Portland supplies may have to come from Eugene, from Medford — from outside the area. You're talking about a logistical nightmare."
Emergency planners at state and local levels say government and first responders will be working hard to save lives, secure neighborhoods and restore services. But in any major disaster, emergency responders would quickly be maxed out dealing with the most immediate problems.
In fact, past research on disasters shows that 80 percent of rescues are performed by untrained private citizens, said Lawrence Behmer, who coordinates the City of Portland's Neighborhood Emergency Teams program, known as NET. Sometimes, however, because these ordinary heroes don't know the safest way to proceed, they risk their own lives unnecessarily. That's why Portland offers free NET training in how to save lives in a disaster.  The program, (known in Seattle as SDART, Seattle Disaster Aid and Response Teams, and nationally as the CERT, Community Emergency Response Team) seeks to boost emergency response capacity throughout the country by teaching volunteers basic search and rescue and first aid skills.
"The idea is that in a massive disaster citizens are the first responders," Behmer told The Skanner. "It can take a while for the fire department to get to you — they are going to be in the most dangerous areas.
"Net volunteers learn to work as a team to elevate debris and pull a victim to safety." 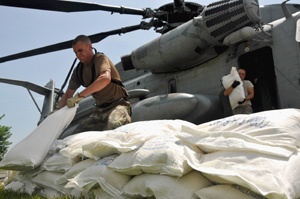 Unprepared and Out of Luck
Public awareness campaigns such as the Red Cross's "Together We Prepare," King County's  "Basic, Better, Best" or the national "Ready" campaign urge every household to make a disaster plan and put together a 72-hour emergency kit containing at minimum a gallon of water a day for each person, enough food for three days, a flashlight, a first aid kit and a radio. So far, however, the volume on that message has been low, so low that a majority of us have tuned it out.
Cynthia Thomas-Johnson, who runs a foster care agency, said she thought about making a disaster plan after the Katrina disaster.
"I thought about putting an emergency kit together, but I guess I'm one of those people who think it will never happen," she said. "I know what goes in it, but I just haven't got one in place."
Thomas-Johnson has plenty of company. A national survey by the American Public Health Association in 2007 found that almost half of us have no emergency plan or supplies.
Asked about how well they would cope with a public health crisis, 27 percent of those surveyed said they felt prepared. However further questions revealed that only about half of them — 14 percent — had put aside the recommended three-day supply of water, food, medicines and a first-aid kit. The reasons?  About 38 percent of us say we simply would rather not think about what would happen in a public health crisis. And 44 percent of Americans say they don't believe in worrying about things that may or may not happen in the future.

Linda Swift said that in reality emergencies happen all the time. The Red Cross responds to an emergency about once every 12 hours, where at least one family has suddenly become homeless. Most of these small disasters are fires.
But emergencies that affect whole communities are not rare either, Swift points out. Severe storms last January caused flooding and landslides all over the Northwest. In the worst affected areas, such as the Oregon coast, telephone communications were knocked out so the 911 system was useless.
In Vernonia, Ore., it took days for rescuers to reach many victims.
The floods showed how many people lack basic survival supplies. People with serious medical problems realized they had no back up generator to power their medical equipment, Swift said. Relatives from all over the country flooded the Red Cross with calls.
"We had to explain that no-one was getting in or out and we had no way of contacting their relatives," Swift said. "It was very hard."
Swift recognizes that putting out extra money for emergency supplies is a hardship for many low-income families.
"Water is going to be a critical issue," she said. "Perhaps you turn on the tap and nothing comes out or it is contaminated.
"What we try to do is encourage people to just one time a month start to put water aside. Wash your own containers, fill them and put them aside. Water bottles don't have to be new. We recommend a gallon a day per person."

For more information on preparedness click on our disaster button on our home page.