Rayshard Brooks (And So Many More) Should Still Be Alive 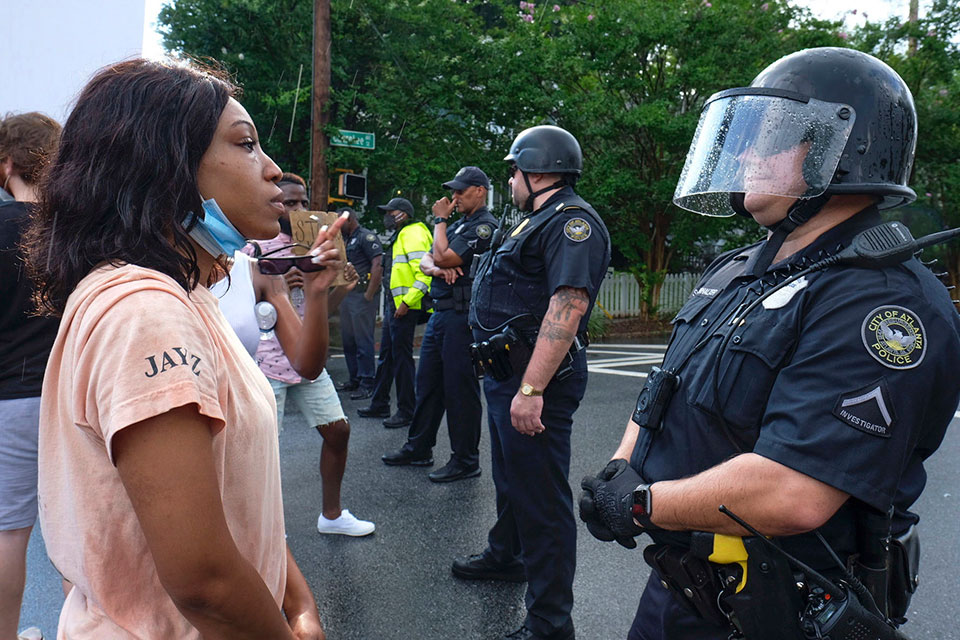 Police departments all across America keep proving the same point: they are not training officers to honor the protection of human life.

The narrative from the police unions and from Trump himself continues to talk about bad apples and poor judgment—and this is a worthy cause; there are corrupt officers victimizing those they are sworn to protect.

The truth, however, is that when the police culture is so close to the line of state-sanctioned crime, the bad apples tend to stay on the force and therefore those crimes are more frequent. In the recent case from Atlanta, Rayshard Brooks, like so many other people of color killed by police, should still be alive. In 2016, for example, fewer than one in three Black people killed by police were armed or suspected of a violent crime.

Clearly, for some police the predatory instinct is strong expressed as, “he shouldn’t have resisted… tried to flee…”

The 4th Amendment protections, as ruled in Tennessee v. Garner (1985), which found that use of deadly force to prevent escape is an unreasonable seizure, guarantees “the right of the people to be secure in their persons.” Lethal force cannot be legally used for the purpose of preventing an escape, only to prevent imminent death or serious injury to officers or others.

About 20 miles north of the Wendy’s where Rayshard Brooks was killed it was hard to teach about the rights and liberties enumerated by the Bill of Rights, but I did. Students would rightly point to examples of contemporary cases that clearly contradicted precedent set by the Supreme Court. So the class was always left to discuss: why do you think this is not being made clear in training?

In reviewing the police force in Ferguson, Missouri, another example, the Department of Justice found in 2015 that, “Officers expect and demand compliance even when they lack legal authority,” and continued, “they are inclined to interpret the exercise of free-speech rights as unlawful disobedience, innocent movements as physical threats, indications of mental or physical illness as belligerence.”

Police officers in Kern County, California, in a 2015 Guardian report, have killed "more people per capita than in any other American county." In 2004 the Department of Just made recommendations to address use of force policies that failed to address problems with excessive force. The DOJ stated that the policy’s authorization of force “to gain and maintain compliance with the law,” was too ambiguous, and could lead officers to believe they were justified in using force in situations in which it was not reasonable.

To better educate myself, and to enhance my ability to teach about the role of policing in the US practice of law and order I went on a police ride-along. It was made clear to me in multiple ways, that officers were expected to be able to pull the trigger—when necessary.

During the ride-along I discussed killology with the lead trainer. Killology is the study of reactions of healthy people in killing circumstances (such as police and military in combat) and the factors that enable and restrain killing in these situations. Lt. Col. Dave Grossman has examined the steps taken in the US military to improve the ability of individuals in overcoming their aversion to taking life. His scholarship is featured in the movie adaptation of “American Sniper,” and presents police departments with “a model for action that ensures professionals can train for and overcome the unique mental stressors of possible violence.”

Ultimately this is the problem.

The structural and systemic apparatus of law enforcement has gone in a militarized direction.

It is highlighted in training intended to overcome the normal human aversion to violence and death. It is reinforced in dangerous manifestations the police culture. Officers who call out excessive force or brutality by other officers are seen as disloyal and are retaliated against. The military culture describes the us and them mentality: I’d rather be judged by twelve than carried by six.

The continued focus on the specific individuals involved fails to address the broader and deeply held challenges in law enforcement. It is part of why the call to defund the police makes sense.

Rayshard Brooks was accused of being asleep in his car in a parking lot. Firing the officer who shot and killed him does not address the larger police culture problem. We know because we see the same problems over-and-over: killed while sleeping, killed during minor traffic stops, killed while unarmed and in lethal holds, killed talking on the phone, killed playing with a toy gun, killed with hands up, killed during a response to a mental health disturbance or for suspected suicidal thoughts, etc. The unnecessary death of so many people, frequently unarmed and innocent, is the manifestation of failed systems and policies.

Our Constitution lays out clear directions for freedoms and equality. A disservice to the Constitution continues through the violence perpetrated by law enforcement officers. We all lose when policies and training promote and perpetuate the violent use of force against citizens. In this war against citizens the protection of the rights and freedoms is the first casualty. We have to stop arming and training our police to believe they are at war with the citizenry of our cities, of our country.