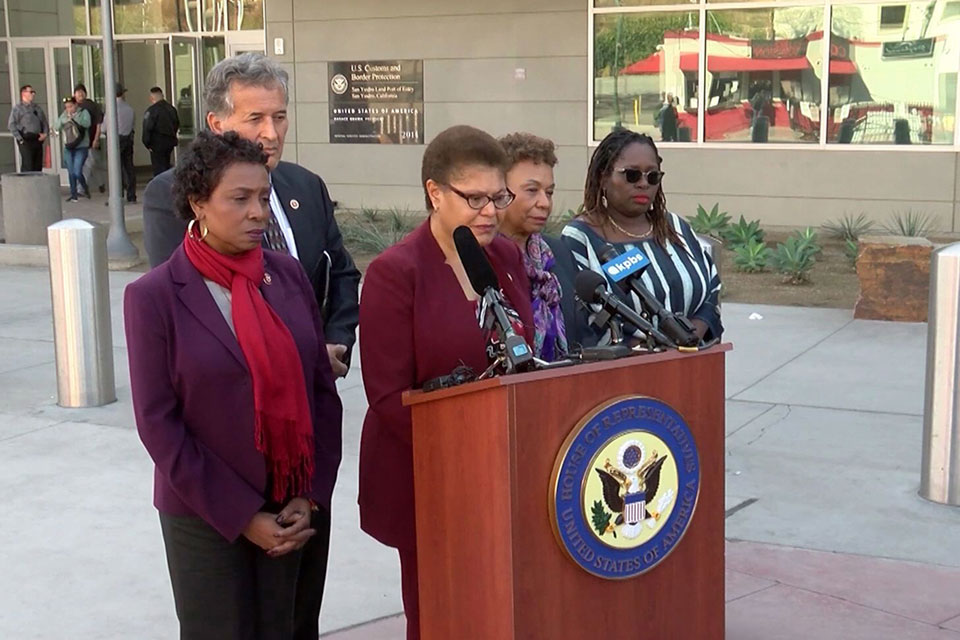 Chairwoman Rep. Karen Bass (D-Calif.) led a delegation of Congressional Black Caucus members to the U.S.-Mexico border on Friday in San Ysidro, California, where they said they witnessed first-hand the deplorable treatment and plight of Black immigrants.

Bass, Congresswoman Barbara Lee (D-CA), and Congresswoman Yvette Clarke (D-NY), each said they wanted to examine the treatment – and call attention to the mistreatment – of African immigrants at the border, including the October 1 death of 37-year-old Cameroon immigrant Nebane Abienwi.

Attorney Nana Gyamfi, the executive director of the Black Alliance for Just Immigration, joined the group at the border.

“It was a very frustrating experience today,” Bass said from the border during an exclusive conference call with publishers, editors, and writers for the National Newspaper Publishers Association (NNPA), the trade association that represents the newspaper and media companies that comprise the Black Press of America.

“We crossed the border into Tijuana, Mexico, and we met with a group of Black immigrants from Cameroon, Sierra Leone, and other African countries. Some who have made unbelievable journeys,” Bass stated.

The CBC Chair and her colleagues blasted the Trump administration and its policies toward immigrants, particularly those from countries that consist predominately of people of color.

Bass described the sobering plight of a Black migrant from the Democratic Republic of the Congo.

“The first child separated from her mother was from a family from the Democratic Republic of Congo.

"The child was sent to Illinois while the mother, who spoke French, was detained at the border,” Bass stated.

“This happens as our country grapples with [a president] who makes it clear that he welcomes immigrants from places like Norway, but not ‘sh-thole’ countries. He’s breaking the law. International law states that if you are from a country that’s experiencing distress, you can request asylum. Trump has done everything he can to block that and to make the United States not compliant with international law,” Bass noted.

In the case of Abienwi, the Cameroonian died in the custody of the U.S. Immigration and Customs Enforcement after experiencing a hypertensive event at the Otay Mesa Detention Center in San Diego.

Reportedly, he was unresponsive and appeared paralyzed on his left side when he arrived at the hospital. After undergoing treatment for a brain hemorrhage, Bass said Abienwi was taken off life support against his family’s wishes and died.

Doctors listed his official cause of death as brain death due to a brain hemorrhage.

“Thousands of African and Caribbean immigrants who immigrate to the United States of America are treated as if they are invisible,” Bass stated.

“Many arrived in South America and then walked north, all to be dehumanized and mistreated at our southern border. We [went] to the border to hear what they have been through. They are an important piece of this story,” Bass said.

In a statement, officials at ICE said they’re still in the process of reviewing Abienwi’s death.

According to various published reports, the Department of Homeland Security records had revealed that Abienwi applied for admission into the country at the San Ysidro Port of Entry without proper paperwork on September 5.

Bass said his death remains a mystery and is cause for concern.

CBC members also pointed to a recent Pew Research Center study that revealed that there are more than 4.2 million Black immigrants in the United States, with Africa, the Caribbean, and Latin America making positive contributions to the United States.

However, those immigrants are at a higher risk for arrest, detention, and abuse because of racial profiling and racial bias, according to the Pew report.

“We need to shed some light on what is taking place here as it relates to Black immigrants from the Caribbean and Africa,” stated Lee, the chair and majority leader of the House Task Force on Poverty, Income Inequality, and Opportunity.

“They came here fleeing from violence in their own countries, getting to a place where they thought they could be treated humanely,” Lee stated. “It’s been the opposite. They are dehumanized, treated in a racist fashion, and then stuck at a border town.

“I hope the Black community understands that this is another example of Trump’s racist policies to make America White again. We see that every step of the way in this process.

“Black America has to rise up. This has got to stop.”

A call to Black professionals for help

Lee added that she’s putting out a call to Black professionals, be it psychiatrists, social workers, and others that their help is needed to help people of color at the border.

“They desperately need our help. Certainly, some Black professionals can provide services that are needed to help them,” Lee stated.

“A lot of them will get very sick, a lot are traumatized and already unhealthy. They will need to be able to survive – they’re barely surviving now. I’m issuing the call. This is yet another stain on America.”

Clarke, the chair of the House Task Force on Immigration for the CBC, said it’s tough to fathom what Black immigrants face at the border.

“These people are resilient, they have gone through quite a few things in their homeland that drove them to try and get to the land of the free and the home of the brave,” Clarke stated.

“We have to speak for them. They don’t have a voice.

"These are people who will be persecuted if they return to their homeland where there is genocide, other hardships, and violence,” she stated.

“We have to be their voices. The Trump policies are totally illegal.”

Gyamfi, of the Black Alliance for Just Immigration, said she was moved by what she witnessed.

“You can look in their eyes. They had a sense that finally, they’re looking at people who look like us, and who actually care,” Gyamfi stated.

“They heard the voices of our leadership. But they see the anti-Blackness throughout the entire system. This is a humanitarian crisis where human rights violations are happening daily.”