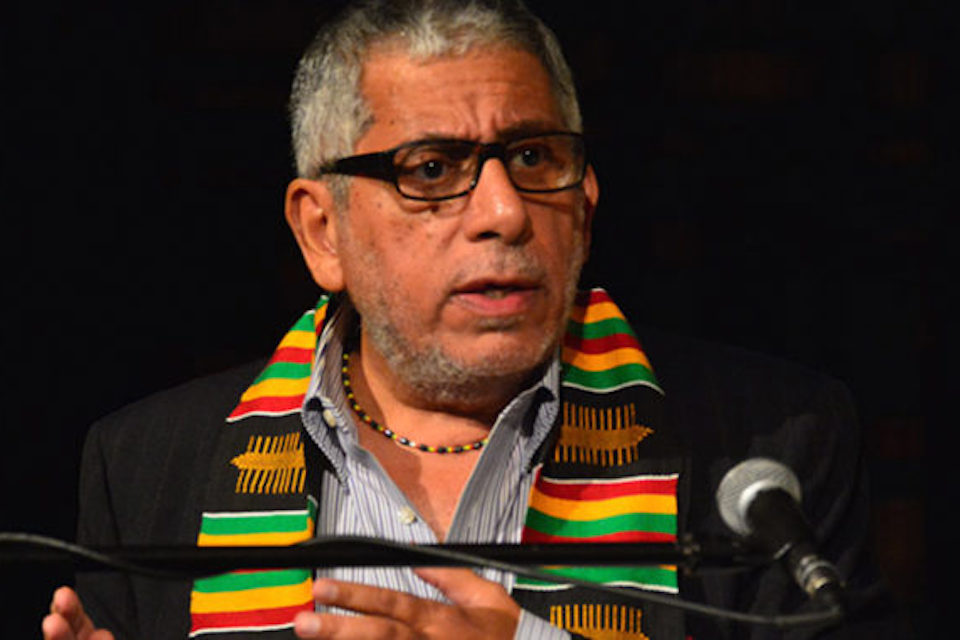 A phone conversation with Don Rojas can easily begin with the subtlest of greetings – a friendly “hello,” and good to hear from you.

But any conversation of length undoubtedly leads to a lively discussion about the Transatlantic Slave Trade, reparations, journalism, and of course Rojas’ celebrated activism and the fight for freedom, justice and equality.

For Rojas, that fight began at an early age and he waged war against injustice mostly with a pen.

“Since I was a young man, I always had an interest in writing and reporting and the spoken word,” Rojas, now 69, said from his home in Maryland.

“I went to school in Grenada with (Grenadian revolutionary and leader) Maurice Bishop.

During that time, Rojas became involved in student activism and joined a student newspaper and student-run radio station.

Later, he attended the University of Wisconsin where he honed his journalism skills.

“That was in the late 1960s and I’ve stayed in the field of journalism and activism, alternating my time and energy over those many years between activism and journalism,” Rojas said, noting that, “for me, there isn’t a clear line of demarcation between the two, especially for those in the trenches with minority media.”

Rojas has always been in the trenches.He said he’s viewed his work as part and parcel of a broader social and economic justice movement.

One of his first positions was assistant director of communications for the National Urban League.

Following his stint there Rojas became an assistant editor at a Black-owned paper in Baltimore.

Among the many legendary interviews Rojas conducted were with leaders from around Africa, including Civil Rights icon Nelson Mandela and singer Bob Marley.

Rojas’ resume reads like a true activist and freedom fighter:

•    He served as Director of Communications for Prime Minister Maurice Bishop, the People’s Revolutionary Government of Grenada.

•    Senior Advisor to Professor Sir Hilary Beckles, Vice-Chancellor/President of the University of the West Indies

•    Director of Communications and International Relations, Institute of the Black World 21st Century

•    Founder of the award-winning digital magazine, The Black World Today, when the internet was in its infancy stages

•    Director of Communications for the National Office of the NAACP

For the latter role, Rojas was recruited in 1993 by then-NAACP Executive Director, Dr. Benjamin F. Chavis, Jr., at that time the youngest NAACP leader in the storied civil rights organization’s history.

Today, the organization still benefits from Rojas’ input and his development of an extensive communications department.

“Don Rojas has made major contributions to the struggle for freedom in Black communities across the globe.

As the first communications director for the NAACP, he not only built the initial model of our communications department but created a vision for the way in which communications can be used as a resource to support social justice movements,” NAACP President and CEO Derrick Johnson told NNPA Newswire.

“There is no aspect of the movement untouched by his work as a communicator, journalist or advocate.” Johnson said.

Also, while Rojas’ accomplishments are exhausting, what remains a constant in all of his work is his role as a visionary, said Malik Russell, the current NAACP Communications Director and former director of Radio Operations for The Black World Today.

“Don is able to look beyond the present toward the possible. A good example is The Black World Today (TBWT).

"At TBWT Don spearheaded a comprehensive news media site geared toward uniting the African Diaspora. On the cutting edge of technology, we helped organize the State of the Black World Conferences using online tools and broadcast it over the net using cell phones at a time when most folks were still in the analog age,” Russell said.

“We were using audio editing software, which is now the standard in radio broadcasting to create TWBT’s online radio network that had dozens of independently produced shows. Don’s vision was simple, he was like the future is open, it’s about who gets there first.”

Rojas said after Chavis was installed as executive director of the NAACP, the organization began to thrive again, particularly because of an infusion of youth.

The first national convention under Chavis, who now serves as president and CEO of the National Newspaper Publishers Association, included a particularly important individual.

“The convention was held in Indianapolis and just a few weeks earlier, Nelson Mandela was released from prison and the first thing we did was reach out to his people and issue an invitation to come and speak at the convention,” Rojas said.

“We weren’t sure it would work out, but we were able to secure his presence in Indianapolis.”

Mandela’s speech was his first and only to the NAACP.

The visit began at the United Nations in New York and, what Rojas called the most underreported news of the decade, Mandela was feted in Harlem by hundreds of thousands during an outdoor rally.

“I remember spending time with him and talking to him about the DNC and the NAACP and he drew parallels with the DNC being founded in South African in 1912 and the NAACP here in America being formed in 1909,” Rojas said.

“There’s a solidarity between the two organizations,” he said.

Rojas, who remains dedicated to the global movement for reparative justice for former slaves, said America was built on the backs of African slaves and African Americans have never been compensated.

Today Rojas, who still stands as of one of the leading progressive figures in recent history, is fighting another fight: one that involves his own life.]

After months of treatment for a chronic back ailment, Rojas was recently diagnosed with multiple myeloma, a particularly aggressive form of bone cancer.

He’s undergoing heavy chemotherapy treatment which will continue in the weeks ahead, followed by the infusion of steroids and then bone marrow transplants.

The cost of his medical care is described as “astronomical” and much of it is not covered by insurance. He and his wife, Karen, have been forced to unexpectedly place their home on the market to help cover the additional medical and relevant costs.

His friends, led by Chavis and actor Danny Glover, have launched a Go Fund Me campaign to raise the urgently needed funds to ensure that his wife and family have the resources to pay for the best lifesaving medical treatments available.

“Don Rojas deserves our support, prayers and our rigid solidarity in salute of his outstanding career as a global freedom fighter."

The encyclopedia contains a trove of information about Rojas’ illustrious career at https://www.encyclopedia.com/education/news-wires-white-papers-and-books/rojas-don-1949.

To contribute to the campaign, visit https://www.gofundme.com/help-don-rojas-in-the-fight-of-his-life.