"Two Societies One Black One White": The Kerner Commission's Warnings 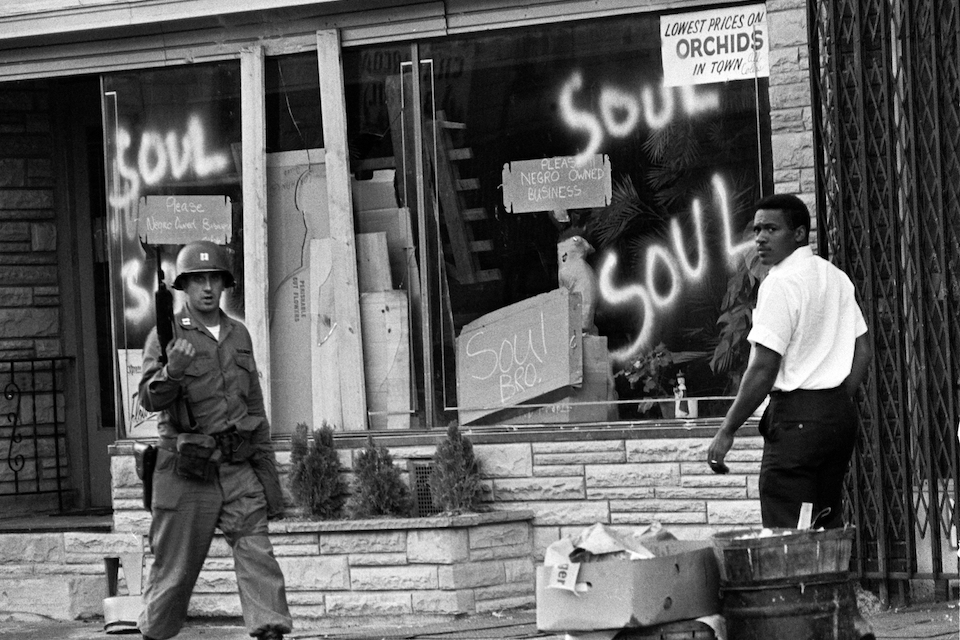 (THE CONVERSATION) On July 23, 1967, Detroit exploded in rioting. Five days later, 43 were dead, 7,200 had been arrested and US$22 million worth of property had been destroyed.

It was just the latest in a string of more than 100 disturbances that shook American cities during “the long, hot summers” of the mid-1960s.

Before the embers cooled, President Lyndon Johnson appointed the National Commission on Civil Disorders to investigate. The panel became known popularly as the Kerner Commission, after its co-chair Otto Kerner, the Democratic governor of Illinois.

Fifty years ago, on Feb. 29, 1968, the commission issued its report. As a historian of civil rights in the U.S., I’m struck by how the power of institutional racism so trenchantly revealed by the report constrains efforts to advance racial equity 50 years later.

As the report masterfully described, these “racial disorders” were really urban uprisings. They were sparked by poverty, unemployment, discrimination in housing and education, police brutality and a sense of powerlessness among inner city residents.

The taproot, however, was white racism, which the commission found “responsible for the explosive mixture which has been accumulating in our cities since the end of World War II.”

The situation was dire. According to the report, “Our nation is moving toward two societies, one black, one white — separate and unequal.”

To avert this catastrophe, the commission demanded “a commitment to national action on an unprecedented scale.”

Recognizing the role of the police in sparking violence, commissioners urged development of “innovative programs to insure widespread community support for law enforcement” and the hiring of more black police. They also demanded that police cease using massive force in the form of “automatic rifles, machine guns, and tanks.”

The report seized public attention. Covered widely in the press, it was issued as a paperback by Bantam books and sold 740,000 copies within two weeks of its release. Its chilling “two societies” phrase became part of the national vocabulary. 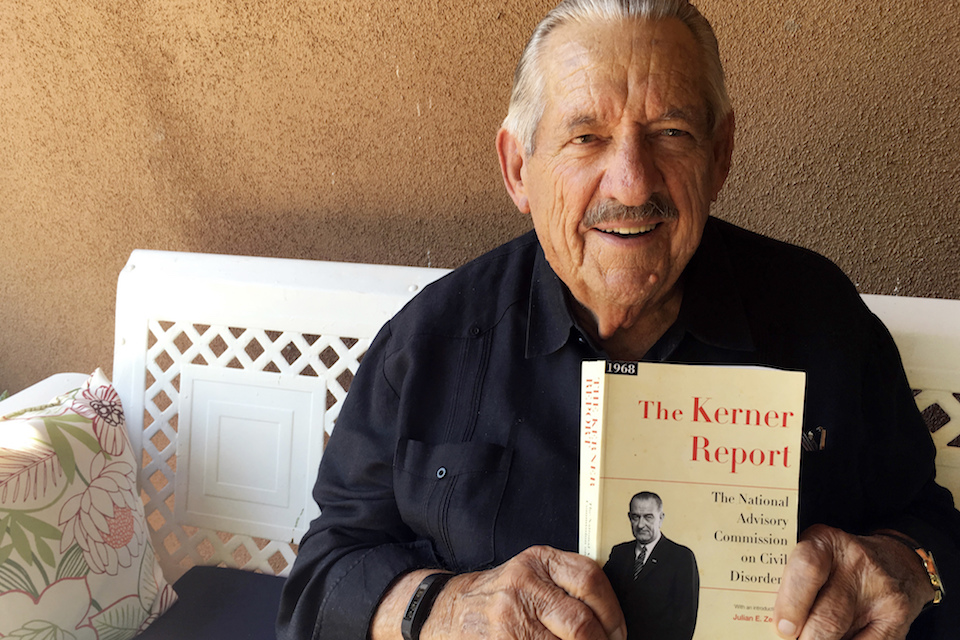 Sen. Fred Harris, of Oklahoma, holds a copy of "The Kerner Report," at his home in Corrales, N.M., Aug. 31, 2017, as he discusses the 50th anniversary of the Kerner Commission, a panel appointed by President Lyndon Johnson in 1967 to examine the causes of the 1960s riots. Harris is the last surviving member of the Kerner Commission and he says he remains haunted that its recommendations on U.S. race relations and poverty were never adopted. (AP Photo/Russell Contreras)

Impact was another matter.

President Johnson, confronting budget deficits, rising inflation, defeat in Vietnam and growing criticism from the right and left, offered tepid support. And his successor, Richard Nixon, rode to victory promising to restore law and order, not to support an ambitious civil rights agenda.

During the ensuing 50 years, retrospectives on the report surfaced on anniversaries and in the aftermath of highly publicized urban uprisings in Los Angeles, Ferguson, Baltimore and Staten Island.

Its effect on policy, however, has been modest. It helped spur passage of the Fair Housing Act of 1968, which aimed to end the residential segregation of American neighborhoods. Coupled with additional legislationpassed in the 1970sand 1980s and the growth of the black middle class, the act has facilitated modest gains in residential integration.

There are now far more African-American police officers than in 1968, but this is due more to litigation and political gains by African-Americans in major cities than the report’s influence. White officers still make up a disproportionate share of police, especially in inner suburbs like Ferguson, Missouri, where the recent movement of black families into the city has changed the racial demographic.

Other recommendations obtained even less traction. Welfare has become less generous, thanks to the welfare reform adopted in 1995 under President Bill Clinton, and police are as much of a flash point as they were in the 1960s, exacting a terrible toll on urban and suburban black communities.

Why the lack of action?

Five decades of uneven economic growth and federal budget deficits bred resistance to expensive new programs. In addition, the commission’s recommendations on law enforcement relied on action by state and local government, which were often reluctant to act.

But racism is the most important factor.

Polls reveal a decline in racist sentiments among whites since the 1960s.

Nevertheless, a 2012 AP poll found that 56 percent of non-Hispanic whites held explicit or implicit anti-black attitudes. Other recent polls have revealed that a majority of whites believe that whites work harder than blacks and that the country talks too much about race.

Persistent racism has been exploited by many Republicans – Richard Nixon, Ronald Reagan, George H.W. Bush and Donald Trump to name a few – to woo working-class white Northerners and turn the South red.

Republican resurgence after 1968 – Democrats have controlled both Congress and the White House for only for only six of the past 50 years – has created partisan gridlock on civil rights, killing serious consideration of the commission’s bold recommendations.

Sadly, the report’s fundamental insight remains as relevant today as 50 years ago.

“What white Americans have never fully understood but what the Negro can never forget – is that white society is deeply implicated in the ghetto,” the report asserted.

I’m encouraged by how Black Lives Matter has once again shattered the nation’s complacency about race. The movement reminds Americans that we have not overcome and that institutional racism remains an intractable barrier to equity. It has shattered illusions that the U.S. has become a post-racial society and challenged the nation to grapple with the ugly realities the Kerner Commission laid bare.

This article was originally published on The Conversation.