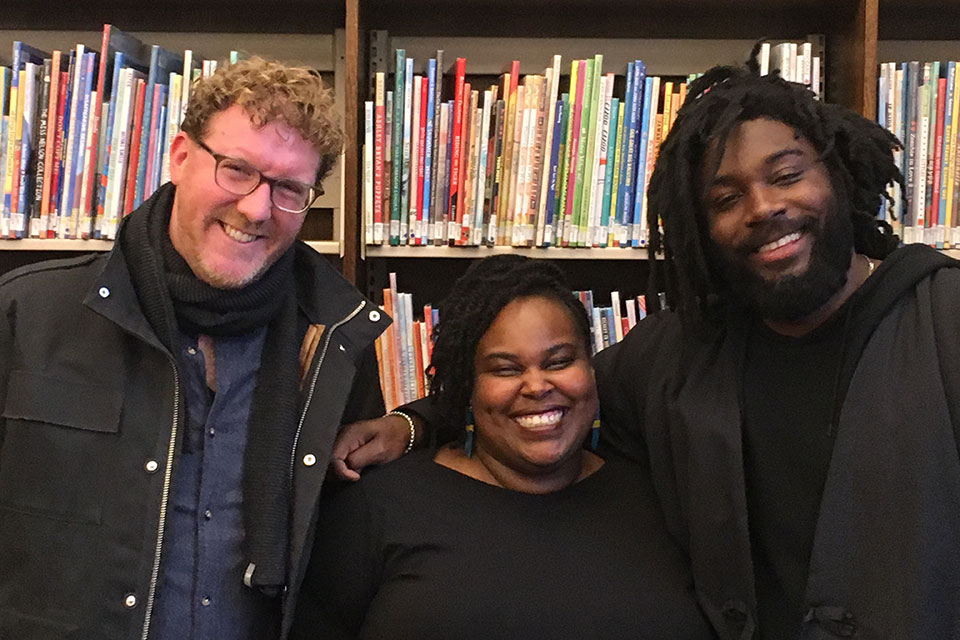 Writer Renée Watson spent time at North Portland Library last week week hosting two programs. Watson is on a fall book tour promoting her latest novel for young adults, "Piecing Me Together." On Nov. 7, the Oregon Writing Project sponsored a two-hour writing workshop. The room was packed with participants, primarily educators, eager to learn about teaching writing and making time for their own creative works.

The next morning, Watson returned to the library with fellow writers Brendan Kiely and Jason Reynolds for what we hope is the first in a regular series of author visits for students, in collaboration with Jefferson High School. This past summer, I approached Watson at a conference, and we discussed the lack of author events for teens in the North Portland area. Knowing Watson is a Jefferson High School alumna, I asked her if there was a way we could get groups of students all reading the same book to come to the library to meet the author of that book. She was excited by the idea and made it happen.

Half of the freshman English classes at Jefferson read “All American Boys” by Kiely and Reynolds. In this raw and honest book, the two authors present a story of police brutality. Reynolds voices Rashad, the innocent Black victim of a police beating; Kiely writes Quinn, a horrified White witness. The other half of the freshman class read This Side of Home, Ms. Watson’s 2015 book about two twin sisters growing up in North Portland and experiencing gentrification of their neighborhood. Watson’s nuanced portrayal of changes to the city and the impact it is having on the sisters’ community is both moving and a necessary read for anyone living in Portland right now.

During the event, the authors read from the books and took questions from students about their writing processes, inspirations, and how they talk about what is happening in the world. Many of the students, eager to improve their own writing, asked how to become a writer and get their work out there.

Kiely’s response was simple— “do you write?” he asked. To the ones that said yes, he said, “then you are already a writer.” He encouraged students to listen and stay curious.

All three authors suggested students share their work widely via social media and writing contests because getting feedback, even rejection, is important to becoming a better writer.

One place new writers can submit their work right now is to the library with the Library Writers Project. The deadline is December 15, 2017, and the best works will be added to the library’s collection.

Reynolds also talked about having never finished a book until he was almost 18 and about how he never saw himself in anything he read. Today, the books that Mr. Reynolds writes are “love letters” to teens like him.

Watson shared with students how she read the Ramona Quimby series growing up, but despite calling the same city home, she was angered that she never saw anyone that looked like her. Now when she writes she makes sure she is bearing witness — making sure the black Pacific Northwest is not erased.

More writing and author events are being planned for the new year, so be sure to check our website www.multcolib.org.