Guest Opinion: The Very Fabric of DOJ's Agreement is Torn Up

It became apparent that the City of Portland wraps local policing with the means to exonerate themselves of any wrongdoing. The US Department of Justice called ours a “self-defeating accountability system” when, in 2011, it found PPB engages in unconstitutional patterns of excessive force against people.

The resultant, 77-page plea deal, in USA. v. City of Portland, kept the ineffectual accountability apparatus intact. It pledged to “retain and strengthen the citizen and civilian employee input mechanisms that already exist in the PPB’s misconduct investigations by retaining and enhancing” them. (Italics mine.)

The image below is from Fig. 1, pg. 27 of DoJ Findings, illustrating the Portland Police Bureau complaint system, click on the image to enlarge. 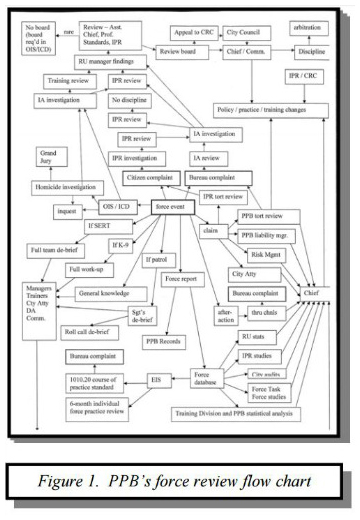 The parties in the case now prepare for annual review by the U.S. District Circuit Court in October. They share substantial consternation that Federal Judge Michael H. Simon will find them non-compliant with an intricate agreement to achieve constitutionally sound law enforcement.

The City, with DoJ backing, now launches into a pair of initiatives designed to unravel citizen participation, both in oversight of cops’ self-exoneration scheme and simultaneously subvert civilian oversight of the plea deal itself. It’s a tremendous pivot, for the DoJ’s Civil Rights Division. It will be a challenge for Judge Simon to ascertain compliance, as the very fabric of the plea deal is torn up, and specific provisions thrown out.

The judge won’t have report from a Community Oversight Advisory Board, established under the deal to “independently assess the implementation of this Agreement.” In a surprising move, the City and the Feds conspired to shut COAB down. All support staff are withdrawn; the office promptly vacated.

It transpires that, months ago, Portland City Council asked PPB and the Auditor’s Office to draft plans for a “consolidated model” of our convoluted accountability structure. At least seven meetings were held behind closed doors in the Mayor’s office, on a need-to-know basis.

The COAB, responsible for oversight of a PPB Community Engagement and Outreach Plan, was positioned to demand adherence to processes outlined in the plea deal.

“PPB shall collect and maintain all data and records necessary to facilitate and ensure transparency and wide public access to information related to PPB decision making and activities, and compliance with this Agreement.” Judge Simon (who excludes public testimony from annual review), would potentially be alerted to another abrogation: “The Chief shall post on PPB’s website final drafts of all new or revised policies that are proposed, specific to … officer accountability, and community engagement, to allow the public an opportunity for notice and comment, prior to finalizing such policies.”

Checks and balances, within a greater effort of checking PPB’s self-exoneration scheme, are subverted. Perpetrators of civil rights violations, devoid of reasoned public input and on a short timeline, scramble to draft paper policy, which cannot be assessed for efficacy: it’s just been cobbled together.

Other cities are adopting police accountability mechanisms derived from national initiative, and best practices advocated by academics and professional policing associations. African American Mayor Ras J. Baraka exercised his authority to establish the Newark (NJ) Civilian Complaint Review Board. He granted subpoena power to that body; to compel police officer testimony, and give sanction for doing so falsely. His Police Director can only change any discipline that citizens hands out, if he or she establishes the board's decision was “clearly in error.”

Auditor Mary Hull Caballero spearheads a contrary effort. According to Oregonian reporting by Maxine Bernstein, ‘consolidation’ is to eliminate public testimony in the rump Citizen Review Committee, an appeals process that has no fact-checking authority.

PPB’s Internal Affairs Unit remains responsible for investigating the conduct of fellow officers; ‘consolidation’ is to move appeals to the clandestine Chief’s Police Review Board.

Final disciplinary decisions (on all but lethal use of force) are left to the whim of PPB’s Chief. The latest report by that body shows the Chief in about a third of cases imposes discipline lighter than that recommended by a majority of his or her peers on the force. In case 2014-B-0028, four of five members recommended termination: Assistant Chief Donna Henderson ordered 120-hour suspension without pay.

Ad hoc changes and closed-door processes, with a moment of public ‘input’ at Council passage, will not get us to real remedy. If the plea deal is being amended, I submit it’s far wiser to appeal, in a structured way, for accountability mechanisms which derive from best practices and broad consent of the governed.

Reporting was updated on Sept. 6, 2016, to reflect the correct Federal court.