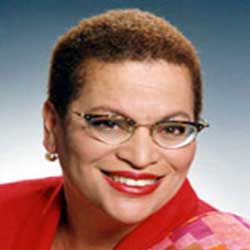 The Sewall-Belmont House is located at the National Women’s Party in Washington D.C. It is one of the oldest houses near the United States Capitol, and was the house where Alice Paul wrote the 19th Amendment that granted women the right to vote. On April 12, Equal Pay Day, President Obama designated the house the Belmont-Paul Women’s Equality National Monument. The National Park System will manage the site, and a philanthropist has donated a million dollars to support the site and to provide some restorations to the house.

According to the American Association of University Women, a group that promotes equity and education for women and girls, “Equal Pay Day is the symbolic day when women’s earnings “catch up” to men’s earnings from the previous year.”

But African American women earn a scant 63 cents to the average dollar a White man earns. A Black woman would have to work until around August 1 to earn as much as a man did in the previous year! As alarming as that fact is, it is equally alarming that few mention Equal Pay Day in a racial context. Ain’t I a woman?

It would have meant a lot to some African American women had President Obama mentioned other inequality in passing. It would not have distracted from the important points he made when he designated the new monument. After all, the press release from the White House talked about “America’s diverse history”. The disparate treatment of African American women is certainly part of that history.

To be sure, President Obama has done a good job in addressing the issue of equal pay and fair treatment of women in the workplace. His first piece of legislation, the Lilly Ledbetter Fair Pay Act, gave women a longer time to sue for workplace discrimination. He has also created a National Equal Pay Task Force and, through executive order, prohibited federal contractors from discriminating against workers who discuss their pay.

In the non-federal workplace, employees can be disciplined, or even fired, if they discuss their pay. Indeed, the reason there are such gaping pay gaps is because there is so little transparency about pay. From legislation he has supported, and discretionary acts he has taken, President Obama would likely do more to close the gender pay gap were there a more cooperative Congress. Clearly, pay equity is not a priority for this Congress.

President Obama has been an aggressively pro-family President. From his support of an increased minimum wage, to his advocacy for paid sick leave (including an executive order for federal contractors), to his support for better overtime regulations, the President has strongly supported workplace fairness.

It takes nothing from his strong commitment to women, though, to acknowledge that African American women earn less, and that Equal Pay Day comes much later for them (and for Latina women, who would have to work until November 1 to earn the same amount a man earned last year) than it does for other women.

Surrounded by three intelligent and beautiful African American women – Michelle, Sasha and Malia – it would be impossible for our President to be unaware of the challenges that African American women face. While I am aware that this President prefers not to deal with race matters, in this last year of his Presidency, he ought to consider doing so. There are few consequences for this action.

President Obama does not mind using Black women as a throwaway line in a speech. At his University of Chicago Law School conversation, he defended his nomination of Merrick Garland to the Supreme Court. He rather vapidly said that some people expected him to pick a “Black lesbian from Skokie,” a comment I found offensive and condescending. If Black women can be fodder for a silly off-the-cuff remark, surely we ought to get enough serious policy consideration for our pay equity issues to be addressed.

August 1 is Equal Pay Day for African American women. We work harder, longer, and for less remuneration than other women do. What are we going to do about it?

Julianne Malveaux is an author and economist based in Washington, DC. Her latest book “Are We Better Off? Race, Obama and Public Policy” is available at www.amazon.com and http://www.juliannemalveaux.com.