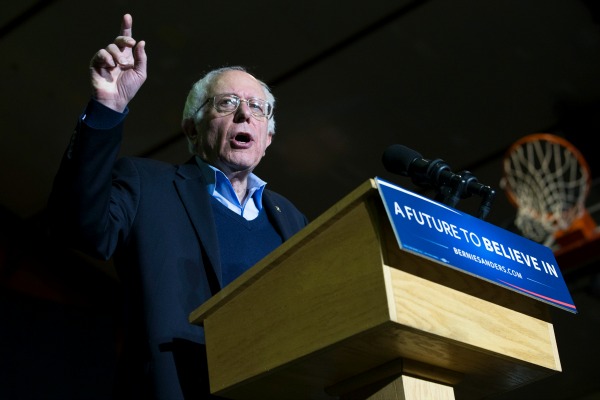 Bernie Sanders raised $20 million with the average donation being just $27.00. What is wrong with Black folks? For decades conscious Black leaders have cajoled, encouraged, admonished, and begged us to raise money among ourselves, a small amount from a lot of people, you know, the way Marcus Garvey did, which we love to brag about but never emulate. What we have done instead is raise a lot of Cain about our collective economic predicament.

Why do we cloak ourselves in Garvey’s legacy of rallying millions of Black people and raising millions of dollars from Black folks but do not pick up where he left off, by pooling some of our tremendous annual income to help our own people?

A massive pool of Black dollars could leverage reciprocity from politicians and from the marketplace. If we were as serious about action as we are about our rhetoric, many of our problems would be solved in a “New York minute,” as they say. But it seems we’d rather just call radio talk shows and voice complaints about what the White man won’t let us do, or what he’s doing to us, or how corrupt his elections are, how we should pack up and leave (with no money, at that), and a myriad of other Black economic and political woes.

We sign online petitions in support of some cause or another; we send letters to our representatives in DC; we do our obligatory marches and demonstrations; we celebrate historical events and fawn over memorials of fallen Black heroes. Some of that is fine, but if those actions are not backed up by economic muscle, they will not advance us one iota.

If Bernie Sanders can raise $20 million in $27.00 increments, why can’t we do the same thing? I’ll tell you why; Black dollars don’t make any sense. We are so focused on the current political prospects of this candidate or that one, and we have lost complete sight of what is really important—and vital to our future: economic empowerment. Sometimes I think Black folks have lost our ever-loving minds, well some of us at least.On the other hand, I am proud to be a member of the One Million Conscious Black Voters and Contributors (OMCBV&C), a group of folks from thirty-five states who are not just talking about pooling resources but are actually doing it.

Together we have made a real difference in the lives of various Black folks; we have supported Black radio by buying advertisements and sponsoring individual shows, in addition to just listening and calling in. We support Black-owned businesses by buying their products and services, and we are committed to a collective approach to obtaining reciprocity in the public policy arena by voting as an unwavering bloc.

We are dedicated to one another and to our collective goals and objectives, and we will not break ranks simply to please some politician, nor will we succumb to their attempts to buy us off. Our funding pool is from the “work of our own hands,” as Martin Delany taught us. Our resolve is built on the shoulders of those strong elders who have made their transitions. We are organized and well on our way to becoming the largest group of conscious black people in this nation.

Most importantly we are about action not rhetoric. We are willing to make the requisite sacrifices necessary to reach our goals of economic and political empowerment, and we have demonstrated that willingness through our actions.

Let’s face it; Black folks have little or no chance of achieving the many things we discuss unless we are organized and prepared to utilize our collective leverage to obtain reciprocity from the system in which we find ourselves. When are we going to follow through on the solutions we put forth in our conversations? As I wrote some time ago, “What is the result of our rhetoric?”

Politically and economically, we are in last place. Are we so complacent about our position in this nation that it has caused us to be paralyzed, frozen in our tracks, even at the thought of moving forward? Raising Cain instead of, or at least in addition to raising money to help ourselves, is a hopeless strategy for empowerment. Imagine one million conscious Black people pooling our money to fund the Harvest Institute or the political campaign of a candidate we “decided” would run. Our schools, museums, media, financial institutions, conferences, businesses, co-ops, movements, foundations, endowments, and any other Black owned entity could all be funded by a committed group of conscious Black folks.

Bernie did it; what’s holding us back? As the old saying goes, “There’s nothing between us but air and opportunity.” Go to www.iamoneofthemillion.com and let’s start taking care of ourselves. We can start with $27.00 each.

James Clingman is the nation’s most prolific writer on economic empowerment for Black people. His latest book, Black Dollars Matter! Teach your dollars how to make more sense, is available on his website, Blackonomics.com.