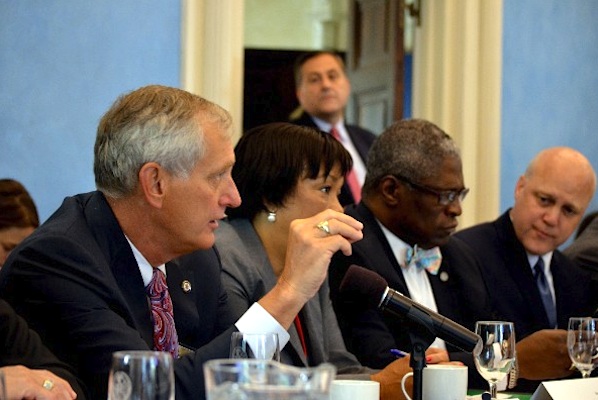 Mayor Hales presented mayors with an emergency resolution, co-authored by mayors who attended the West Coast Mayors Summit ‪in December, calling on USCM to band together to lobby federal partners for the tools they need to address housing ‪affordability and homelessness.

"The power of the West Coast Alliance of Mayors, and the power of this resolution, is that ALL of our cities, ALL of our advocates, ALL of our nonprofits can ask for the tools we need to address this crisis," Mayor Hales said. "TOGETHER we can mobilize around a mutual issue."

Mayor Hales framed the issue in a powerful anecdote he’d heard from the principal of an alternative high school in Portland:

"She told us about Carl, a student at her high school who she knew was homeless. She knew that he was sleeping in a car, not getting a shower, getting very little sleep, showing up at class as best he could.

"So one day she’s sitting in a science class with him, and the teacher posed an arcane question about genetics, and asked, ‘Who’s got a theory about why this phenomenon occurs?’ Carl raised his hand and laid out this really thoughtful theory about how he thought that problem could be solved.

"The principal took him aside at lunch and said, ‘How’d you know that? I know you’re sleeping in a car. I know you didn’t get a lot of sleep last night. I know you’re coming to school hungry. How did you do that?’ His eyes lit up and he said, ‘I love science. I want to be a geneticist.’