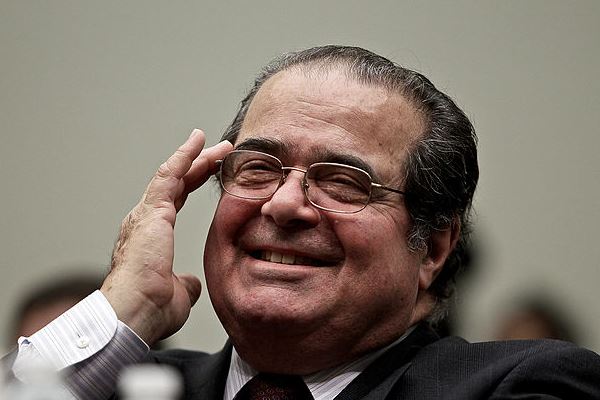 On the same day that President Barack Obama gave a stirring and historically grounded commemoration regarding the 150th anniversary of the passage of the 13th Amendment, the one that “abolished” slavery, Supreme Court Justice Antonin Scalia chose to disregard tenets of equality and opportunity from the bench during the hearing for Fisher V. University of Texas. Scalia suggested that African American students would benefit more if they went to “lesser track” schools.

“There are those who contend that it does not benefit African-Americans to get them into the University of Texas, where they do not do well — as opposed to having them go to a less advanced school, a slower-track school where they do well,” Scalia said. “One of the briefs pointed out that most of the Black scientists in this country don’t come from schools like the University of Texas. They come from lesser schools where they do not feel that they’re being pushed ahead in classes that are too fast for them.”

What does Justice Scalia mean by “lesser schools?” Does he suggest that the African Americans, most at the top 10 percent of their high school class (as required by Texas law) can’t compete with their peers, similarly situated students at the top of their classes?

More than three quarters of the slots at the University of Texas-Austin are reserved for that group of students – the best and the brightest of their high schools. Fisher was a middling student who did not have enough social value to be considered among the 8 percent whose admission is a function of the Personal Achievement Index (PAI) and Academic Index (AI). These are the folks who based on their race, socioeconomic status, family background, extra curricular activities and other factors stand out.

These folks are not all African American; in fact of the 841 that make up the 8 percent, only 47 of them scored lower than Fisher and only five of them were African-American. They are folks whose portfolio deserved special consideration.

Lots of students don’t get into their first choice school. Most recover – they go to their second or third choice, graduate, and manage their lives happily. From time to time, they may think they would have liked to have their first choice.

Both African American and white students go to schools that are less highly rated than the University of Texas (lesser schools, really). Most of them succeed. They would have succeeded at UT, too. Regardless of race, they accept the fact that, not in the top 10 percent of their class, they were not entitled to admission. After that, their admission was a roll of the dice.

If there is a poster girl for fairness, she isn’t Abigail Fisher. To lift her up is to embrace the arrogance of White skin privilege. To lift her up is a disgraceful rebuff to the University of Texas students who achieve against all odds. To denigrate the students who were admitted instead of Fisher is a laughable attempt by a so-called justice to justify his injustice, and it flies in the face that our President made when he spoke of the 13th amendment.

Julianne Malveaux is an author and economist based in Washington, DC. Her latest book “Are We Better Off? Race, Obama and Public Policy” will be released in 2015 and is available for preorder at www.juliannemalveaux.com.