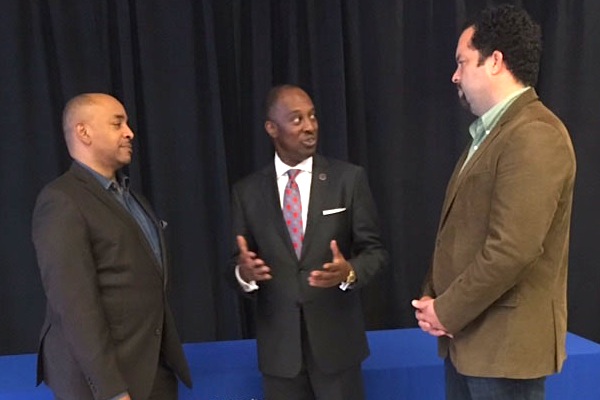 Last week the U.S. Black Chambers, Inc., representing nearly 250,000 small businesses, launched the first in a series of conversations about the long-term health and economic benefits of reversing climate change to African Americans.

Ben Jealous told the room, “Environmental concerns are not abstractions for African Americans. They are real, they affect us in very real ways, and they are getting worse.” He went on to say, “We have a responsibility to act now as if everything depends on this, because it does. From jobs, to business owners, to our families and children, climate change is hurting our communities. Supporting the President’s Clean Power Plan is an obvious first step to reversing the negative impacts of environmental injustices and having equal participation in the green economy.”

Nearly 40 percent of the six million Americans living close to coal-fired power plants are people of color, and are disproportionately African American. It’s the toxins from these plants that are responsible for thousands of premature deaths, higher risks of asthma attacks and other respiratory diseases, and hundreds of thousands of missed work and school days.

Aside from the health consequences, small Black businesses cannot be excluded from conversations centered on the green economy boom. Green collar jobs are a growing industry, and hold lots of potential toward parity and advancement of the Black economic agenda.

“The U.S. Black Chambers exists to support efforts to strengthen the Black community, and this includes a commitment to President Obama’s Clean Power Plan, and to a green economy,” said Ron Busby, Sr., president and CEO, U.S. Black Chambers, Inc.

“As we gain greater fluency in green technology, we can rise in the public discourse, as we must. Only then can we ensure healthier and better economic futures for African Americans across the country.”

Both Ben Jealous and Rev. Hargrove agreed that reversing climate change is of paramount importance, that our relationship to the earth is one that we must take seriously and act on while we still can. This goes beyond religion, and goes beyond our individual organizations.

“Whether you are a Christian, Muslim or Jew, we all have the responsibility of Adam,” said Jealous. Rev. Hargrove echoed that sentiment stating that we are stewards of God’s planet, and must act as such.

While the group was talking in Baltimore, similar conversations were being held in Austin, Texas and St. Louis, Mo. These important conversations will continue into 2016. Visit www.usblackchambers.org for more information.