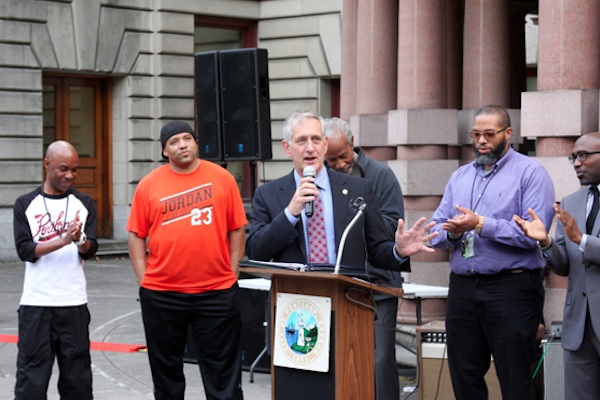 Portland's mayor sent this message to Portland this week detailing his accomplishments:

Taking a minute to reflect on last week, I couldn’t be more proud of what we’ve accomplished for our city.

We brought forward serious and impactful housing proposals. (Landlords must give 90-day warning before evicting tenants)

Portland was the star of an international webinar, featuring me and the biggest climate advocate in the world, Bill McKibben.

We welcomed 800 people to Portland and shared with them our plans to become the world leader in benefit corporations (Best For Portland Awards!). And my chief of staff, Josh Alpert, received a standing ovation for his speech!

We put in motion plans for the almost immediate sheltering of hundreds of unhoused people.

We announced at the Dave's Killer Bread Second Chance Summit that we’re bringing back to Council a strong “Ban the Box” policy that removes barriers to employment for ex-offenders, increasing their likelihood of a successful life outside of prison.

We hosted a national delegation of Black Male Achievement cities, (click to see photos) which convened in Portland to mark progress made here and across the nation.

Oh, and we produced the first-ever hip-hop concert at City Hall!

The reason I love this job is because we make a difference in the lives of people we may never know. My team and I don’t do this work for thanks; we do it because we believe in Portlanders and love this city.