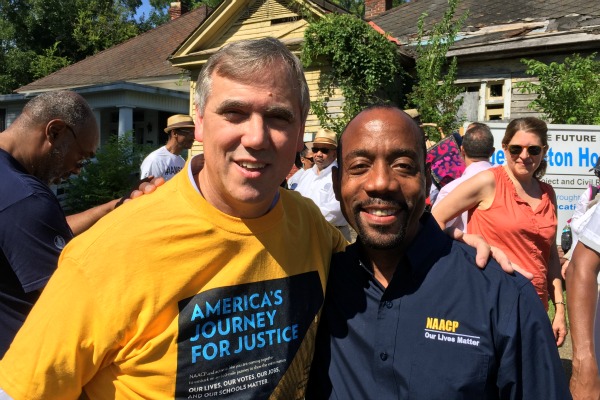 On Sept. 15, the NAACP’s “America’s Journey for Justice” march arrived in Washington, DC – after an 860-mile journey from Selma, Alabama. Over eight weeks, hundreds have participated to demand federal protection of civil rights for all Americans.

Last month, I joined the participants to kick off the march at the foot of the Edmund Pettus Bridge in Alabama. Just fifty years ago, the bridge was the backdrop of Bloody Sunday – when some 600 civil rights activists, marching in defiance of segregationist repression, were brutally attacked by law enforcement.

That fateful Sunday shocked the conscience of Americans everywhere. It played an integral part in our nation’s long fight to secure the full measure of equality, dignity, and opportunity.

While the extraordinary progress we have made in this fight over the last five decades cannot be denied, in every corner of our country profound inequalities remain.

The time has come for us as a nation to close these persistent gaps – to be bolder and better in securing full rights for all of our citizens.

In Congress, we need to do our part. We should enact education reform and make college affordable again.  We should reform our criminal justice system to make it more fair and more safe.  We must ensure that everyone who is willing to work hard has the chance to get a good living-wage job – no matter what their name is, where they live, who they love, or what their skin color is.

We must also work in a bipartisan manner to safeguard the hard-won rights of minority voters and restore the integrity of the Voting Rights Act (VRA).   For the past fifty years, the VRA has expanded minority participation in elections by removing first-generation barriers to ballot access, such as literacy tests and poll taxes. It has also tackled second-generation barriers to voting — like at-large elections and gerrymandering — that are designed to dilute minority voting power.

Since the VRA was passed, Congress has, time and again, reauthorized the law, most recently, in 2006, when we voted to extend it for another 25 years. Unfortunately, in 2013, the Supreme Court struck down key provisions of the VRA in Shelby County V. Holder. In the wake of the decision, access to our most fundamental right is suffering.  In the last two years alone, at least 10 states that had been covered by Section 5 of the VRA introduced new restrictive legislation that would make it harder for minority voters to cast a ballot.

We cannot let our civil rights laws return to once again being, as Dr. King said before the passage of the Voting Rights Act, mere “dignity without strength.”  It is our responsibility in Congress to pass legislation to protect and defend the right to vote for all Americans.

In addition to these policy changes, we need a societal change. As a nation, as a people, we must stop hiding from hard truths about race.  We must recognize the persistent inequalities we face are not a Black problem or a Brown problem, it’s an American problem.

Although the “Journey to Justice” march is complete, our commitment to its purpose has not wavered. Our effort to ensure full equality goes on.  We will keep fighting to balance the scales of justice, to roll back roadblocks to opportunity, and to extend the full promise of America to every American.