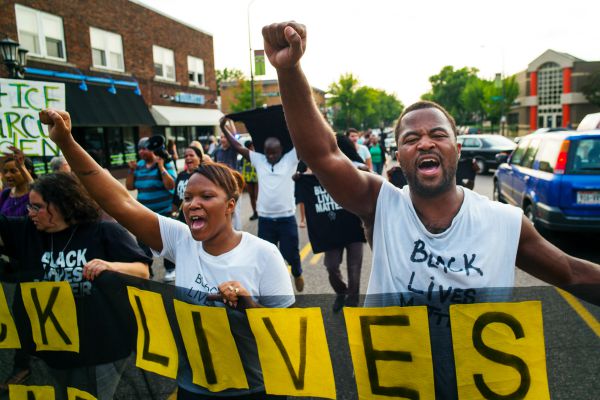 Led by Fox News, conservatives are trying to discredit the #Black Lives Matter Movement by claiming incorrectly that it is a Black hate group that encourages the killing of police officers.

On the Aug. 31 edition of Fox & Friends, Elizabeth Hasselbeck asked, “Why has the Black Lives Movement – Black Lives Matter Movement – not been classified yet as a hate group? I mean, how much more has to go in this direction before someone actually labels it as such?”

Conservative pundit Katie Pavlich, without a thread of evidence, told Fox’s Megyn Kelly on Sept. 2 that Black Lives Matter is “a movement that promotes the execution of police officers.”

At a news conference on Aug. 30, the Harris County Sheriff Ron Hickman acknowledged that no motive had been established for the previous day’s fatal shooting of Deputy Sheriff Darren H. Goforth outside of Houston. But that did not prevent him from linking the brutal cop murder to the grassroots group dedicated to curtailing violence.

He said, “This rhetoric has gotten out of control.” So much so, he said, “to the point where calculated, cold-blooded assassination of police officers happen.” Hickman added, “We’ve heard Black lives matter, all lives matter. Well, cops’ lives matter, too. So, how about we drop the qualifier and just say lives matter?”

Of course, there is not a scintilla of evidence that the Black Lives Matter Movement has at any point remotely supported the killing of law enforcement officers. Rather, they have highlighted the troubling number of unarmed African Americans killed by police officers. And for that, they should be commended, not condemned.

After studying FBI data, USAToday found, “Nearly two times a week in the United States, a white police officer killed a black person during a seven-year period ending in 2012…The reports show that 18% of the blacks killed during those seven years were under age 21, compared to 8.7% of whites.”

Despite the highly-publicized killing of police officers in Texas and Illinois, the number of law enforcement officers killed over the first eight months of 2015 is 16 percent lower than it was over a similar period in 2014, according to FBI figures compiled by the National Law Enforcement Officers Memorial Fund.

So far, 26 officers have been killed this year by firearms, down from 31 over a similar period last year. More officers – 38 – died this year in traffic-related incidents than by gunfire and another 21 died from other causes.

In an attempt to shift the emphasis from the unjustified police killing of unarmed African Americans, conservatives are raising the issue of so-called Black-on-Black crime – as if that’s an issue that truly concerns them.

Fox reporter Doug McKelway said on Sept. 1, “The often heard mantra that ‘Black Lives Matter,’ some say, falls flat when you consider just how many Blacks are killing other Blacks. That remains the majority of homicides across the country.”

Larry Elder, a Black conservative, made the same point, the same day on the same network: “This is about people whining and bitching and moaning about nonsense. If they really want to talk about Black Lives Matter, the fact is that last year 6,000 Black people murdered other Black people. Where are they on that? And the number one preventable cause of death for young black men is homicide at the hands of other Black men.”

If Elder and McKelway wanted to be accurate, they would have pointed out that just as most Blacks kill other Blacks, most Whites kill other Whites. Yet, there is no mention of White-on-White crime.

It’s not just a matter of Blacks killing other Blacks and Whites killing other Whites – most homicides are committed by people who know their victim. The assailant is usually an acquaintance, spouse, or other family member.

In its annual report on Black homicides, issued in January, the Washington-based Violence Policy Center found that in cases where the relationship between the killer and victim was known, 70 percent of the victims were killed by someone they knew; only 30 percent were killed by strangers.

Furthermore, 52 percent of the homicides involved an argument between the victim and the offender.

In an editorial, the New York Times accused “the Republican Party and its acolytes in the news media” of trying to demonize the Black Lives Matter Movement.

It said, “They [Black Lives Matter] are not asserting that black lives are more precious than white lives. They are underlining an indisputable fact – that the lives of black citizens in this country historically have not mattered, and have been discounted and devalued.”

George E. Curry, former editor-in-chief of Emerge magazine, is editor-in-chief of the National Newspaper Publishers Association News Service (NNPA) and BlackPressUSA.com. He is a keynote speaker, moderator, and media coach. Curry can be reached through his Web site, www.georgecurry.com. You can also follow him at www.twitter.com/currygeorge and George E. Curry Fan Page on Facebook. See previous columns at http://www.georgecurry.com/columns.