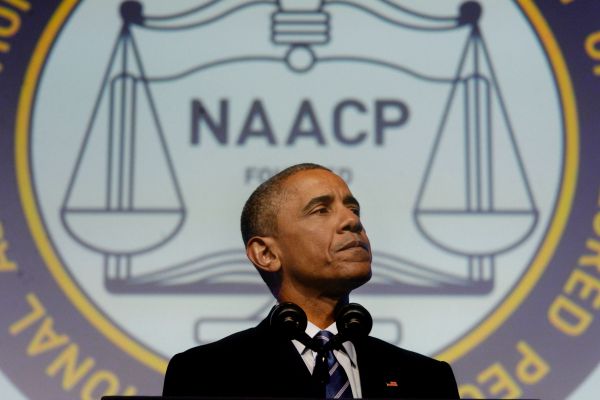 Whenever the president of the United States speaks to a national convention of the National Association for the Advancement of Colored People (NAACP), millions of people pay attention. As a former Executive Director and CEO of the NAACP, I listened very carefully last week to President Barack Obama’s historic keynote address to the organization’s 106th annual convention in Philadelphia.

There was a noticeable deliberate “freedom of expression” style and substance in President Obama’s speech to the NAACP. He was confident, candid and clear. Obama was unrestrained, passionate and focused. In other words, the president went straight to his main subject matter: The urgency and mandate today for criminal justice reform in the United States.

President Obama stated, “But today, I want to focus on one aspect of American life that remains particularly skewed by race and by wealth, a source of inequity that has ripple effects on families and on communities and ultimately on our nation – and that is our criminal justice system.”

Obama’s remarks were timely and welcomed by millions of families that have been devastated as a result of the injustice of the current court and prison system. It was full of analysis and statistics that went beyond typical political rhetoric. He cited the following facts to stress that now was the time for bipartisan corrective action by all levels of government:

We all should be willing to join and support the emerging criminal justice reform movement in America. Hopefully, President Obama’s address to the NAACP will stimulate the passage of bipartisan legislation that will stop racial profiling and other legislative measures that will help to dramatically reduce the prison population in the United States. In the absence of real reform, the issues surrounding mass incarceration will not be adequately resolved

President Obama made reference to the fact that on reaching the ultimate goal of criminal justice reform, there are today converging interests between the NAACP and the politically conservative Koch brothers, as well as between the ACLU and Americans for Tax Reform and among other divergent groups who have not worked together on social justice issues in the past. That is a good sign of what might be possible going forward.

Frederick Douglass said it best, “If there is no struggle, there is no progress.” But the struggle to reform the criminal justice system must move beyond just a momentary national news cycle event response to whenever President Obama makes an outstanding speech. I wish social change was that easy to achieve. It is not. The work has begun, but we still have a lot of hard work and coalition building to do to make real reform happen.

I believe we in the African American community has to take more responsibility to end mass incarceration and to challenge all the inequities of our society. Ending poverty and injustice, first and foremost, is our demand and it also has to be our responsible leadership to keep pushing forward. The government has its role, but we should not solely rely on the government. I believe in self-development and self-improvement. Our struggle for freedom, justice, equality and empowerment must continue with renewed energy and determination.

Benjamin F. Chavis, Jr. is the President and CEO of the National Newspaper Publishers Association (NNPA) and can be reached for national advertisement sales and partnership proposals at: [email protected]; and for lectures and other professional consultations at: http://drbenjaminfchavisjr.wix.com/drbfc