Best of the Web: Chill Out in the July Heatwave 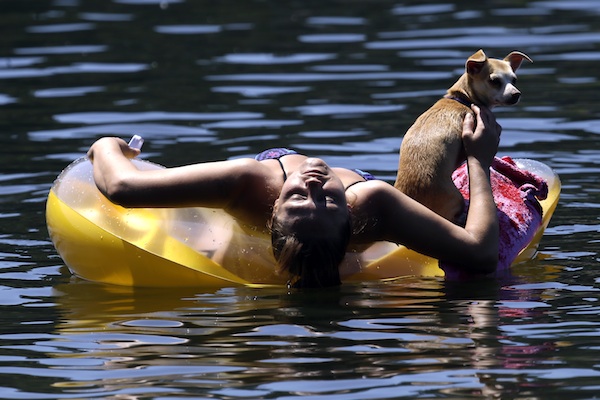 The Northwest is having a heatwave but there are plenty of reasons to chill out this week.

"This isn't symbolic and shouldn't be received or perceived as symbolic," said Dante James, director of Portland's Office of Equity and Human Rights. "We can't let it just be a symbol. We have to ensure that we mean what we say."...
Nkenge Harmon Johnson, chief executive of the Urban League of Portland, emphasized that the City Council must track progress for the newly approved racial equity goals.
"We measure what we treasure," she said. "If we don't count it, it doesn't count."  Find the goals here: http://bit.ly/1HTaQk0   Read the whole story here: http://bit.ly/1TrqBRc

Rolling Stone looks at the life of hip hop mogul Suge Knight who is facing a murder charge after running over a friend as he sped away from a dispute.

"Knight's ongoing embrace of the thug life may have destroyed any remaining credibility he had as a businessman. "When it comes to the Piru shit, he should've stepped away a long time ago," says Jones.( Cash Jones, a.k.a. Wack 100, a former Death Row "foot soldier" who now manages Ray J and the Game.)
"Instead, he got neck-deep into it."

With proceeds from Dre's chart-topping hits a distant memory, and no new breakthrough artists to profit from, Knight has apparently had to find alternative sources of income. "Suge had to go back and adapt to what he knew: going around and getting money from people that he felt owed him," Wright says.

In 2007, when a reporter for The Washington Post asked Knight how he still had money, he preferred to evade the answer rather than lie. "I don't lie," said Knight. "The only people I lie to are the police."  Read the full story: http://rol.st/1LXlg1Y

Sens. Ron Wyden and Jeff Merkeley are sponsoring a bill that could legalise banking for marijuana businesses:

"The legislation would put limits on federal bank regulators on four fronts:

Read the whole story in the Seattle PI: http://bit.ly/1NVOTiz

Find out why Bernie Foster is calling for 'Opportunities in Oregon's New Marijuana Industry': http://bit.ly/1CwFhdA

Good Riddance to The Confederate Flag

Watch it come down in PBS Newshour's video of South Carolina lowering the Confederate Flag for good.

Baltimore: A City in Trouble

Reuters reports in depth about the impact of Freddie Gray's death on Baltimore:

"One consequence of the riots was that hundreds of thousands of doses of hard drugs are on the streets after an uncountable number of drug stores — 27 is the accepted figure — and two methadone clinics were looted. Baltimore already had a drug problem.

Before he was replaced, Batts said there were enough illegal drugs on the streets to keep the city high for a year."  Read the story here: http://reut.rs/1IQWXSz

Trying to Be a Father

The Atlantic reports on a father's struggle to keep his daughter. If Emanuel's sister had not pushed him to sign South Carolina's Responsible Father Registry he would have lost his rights to his child.

"Today, 33 states have putative-father registries. Some require mail-in forms. Others, including South Carolina, allow men to register online... From a birth father's perspective, however, there's a significant problem: Hardly anyone knows that these registries exist." Read the story: http://theatln.tc/1TrvXfj

ColorLines is just one of the publications reporting that American Muslims have raised more than $50,000 to help repair Black Churches.

"As Muslims we know the importance of protecting the vulnerable and respecting people who call on God in their various tongues. We want for others what we want for ourselves: the right to worship without intimidation, the right to safety, and the right to property." http://bit.ly/1D7rIvZ

Rihanna's Blood-Soaked Video: Is it Powerful or Just Poor?

Rihanna's new video "Bitch better have my money" has caused controversy because of its explicit violence. The Guardian took a look at the objections and concluded it's because it puts a Black woman in control.

"To be sure, the video is vividly violent – an unabashed revenge fantasy – but here's what didn't occur to me: is it anti-feminist? Feminist? Misogynistic? Why would it? Rihanna is a grown woman who makes life and career choices for herself with the expectation and understanding that she is as free to do that as her male peers are. How is that not feminist?"
http://bit.ly/1O0KNGN

Here's the video, but take warning. It's not for under-18s.

Be Inspired by: Ta-Nehisi Coates

NPR has an interview with writer Ta-Nehisi Coates about his first book, 'Between the World and Me'.

"This book is personal, written as a letter to his teenage son Samori. In it, we see glimpses of the hard West Baltimore streets where Coates grew up, his curiosity at work on the campus of Howard University and his early struggles as a journalist."
Read the story: http://n.pr/1GdFhdp

Listen to the interview here:

Best of the Web is on vacation now until August. See you then!