Serena Williams, a Champion on and off Court 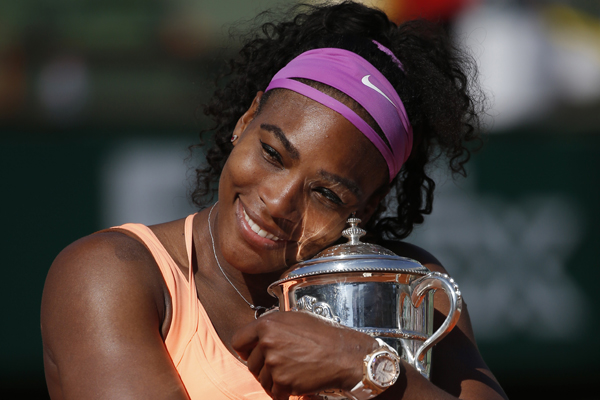 Serena Jameka Williams is more than one of the greatest tennis players in the world. She comes from a Black American family that has come to epitomize what it means to consistently struggle and triumph to success in professional sports and in family life. Most importantly, however, is Serena’s demonstrated commitment to freedom, justice and equality.

Across the world, Serena Williams has evolved to symbolized a true champion in the world of global sports and as well as a vibrant role model for young women who dare to push forward for equality on the international stage of history. Having just won the French Open against Lucie Safarova in Paris, Serena has now won 20 major tennis singles championships.
At the age of 33, she still has a tremendous career ahead of her as she continues to win tennis competitions throughout the world. Today, she is ranked as the number one female tennis player in the world. Serena and her sister, Venus, also an internationally recognized tennis winning legend, are admired by millions of people.
But it has not been an easy journey. The Williams family has had to overcome many hardships and difficulties. As Black American women tennis stars, each has had to face multiple forms of racial prejudice and stereotypes in the sport and in the media. Yet, because of the irrepressible spirit and strong determination of the Williams family, Serena continues to soar to the heights of achievement and success.
Serena recently explained to TIME magazine how she had to stay focused to achieve her career goals while refusing to let inequalities and indignities hold her back. The fact that she had the constant strength and support of her family was key. Serena’s father and mother coached and managed her career from the very beginning as she began to win major tennis matches as a teenager.
Even though Serena won a major tennis tournament at Indian Hills, Calif. in 1997 when she was only 15 years old and then again in 1999, in 2001 at the age of 19, she was booed by the predominantly White audience. Subsequently, Serena was falsely accused along with her sister Venus of cheating and throwing the game at Indian Hills.
Williams stated, “The undercurrent of racism was painful, confusing, and unfair… As a black tennis player, I looked different. I sounded different. I dressed differently. I served differently. But when I stepped onto the court, I could compete with anyone.”
From that time in 2001 until today, Serena and the Williams family have prevailed with resilience and won against the odds of racial and social inequality.
During those years of overcoming the skepticism and critics of Serena, I had the opportunity to meet with her father, Richard Williams. His confidence in Serena’s stamina and skill never waned. I could readily sense that Richard Williams had raised all his children to share his freedom-fighting spirit and resolved.
In 2003, tragedy struck the Williams family when the oldest daughter, Yetunde Price, was killed by gunfire in Compton, Calif. Yetunde had also served as a personal assistant to Serena and Venus. The Williams family stayed closely bonded during and after that tragedy.
During a tour of Africa, Serena confided to a group of aspiring girls in Nigeria about not allowing constraints or prefixed social molds to hold you down. She said, “We were able to break the [mold] and win a lot of grand slams and change the face of tennis … when tennis was very dominated by white people. It doesn’t matter what your background is and where you come from, if you have dreams and goals, that’s all that matters.”
Watching the final moments of Serena’s latest with at the French Open, it appeared that every time she hit the tennis ball, Serena was striking more than another triumphant blow to win the tennis championship. Serena Williams was also striking another victorious blow for freedom and equality.