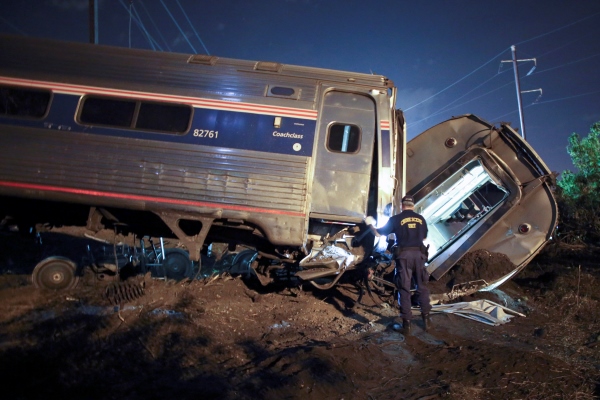 When Amtrak Northeast Regional Train #188 derailed on May 12, federal budget observers wondered if the underfunding of our nation’s fraying infrastructure was at least partly responsible for the deaths of eight people and the injuries to more than 200. Despite these questions, House Republicans voted to reduce President Obama’s request for Amtrak funding from $2.45 billion to $1.14 billion. The Republican proposal not only reduces the current level of funding for Amtrak, which is $1.4 billion, it also delays or eliminates needed capital for improvements.

Legislators who represent areas served by the Northeast corridor trains running from Washington D.C. to Boston), including New York’s Charles Schumer (D) and Philadelphia’s Chaka Fattah (D), have voiced objection to the parsimonious plan to underfund Amtrak. Still, House Speaker John Boehner (R-Ohio), as characteristically myopic as the proverbial ostrich with its head in the sand, lost his cool when a reporter asked about funding for Amtrak.

When Ginger Gibson, a political reporter for the International Business Times, queried Boehner about Democratic criticisms of Amtrak funding, he called her question “stupid.” He then embarked on a partisan rant that ignored the fact that eight people died because of the derailment. What does money have to do with it? Everything.

If budgets allowed for more than one engineer on a train, then Brandon Bostian, the engineer who claims not remember why the train sped up, might have had some backup. Further, with more funding, would the positive train control safety system (which slows speeding trains) have been functioning properly?

Investigations have not yet revealed why Train #188 derailed. It was going 106 miles per hour when it should have been going 50, but how did it speed up so rapidly, and why? Why are there not enough precautions to prevent this kind of accident?   What will be done to prevent similar tragedies in the future?

Trains aren’t the only parts of our infrastructure that need attention. The American Society of Civil Engineers (ASCE) issues a report card on our nation’s infrastructure every four years. The most recent report, released in 2013, gives the U.S. a grade of D+ when 16 areas (including rail, bridges, aviation, roads and waste disposal) are considered. We get the highest grade, B-, in solid waste disposal because we are both producing less trash per capita, and recycling more of it. We earn D- grades for the status of our levees and waterways. We earn D grades for most other categories, so the C+ grade for rail, compared to D grades for aviation and roads, may not seem like such a bad thing. Still, while U.S. trains should be excellent they are just a tad better than mediocre.

ASCE says that $3.6 trillion dollars are needed to bring our infrastructure up to the level of good, or B, level by 2020. They say the gap between what is funded and what is needed is about $1.6 trillion, or $201 billion a year. Our Congress is so focused on cutting spending that they refuse to invest in infrastructure.

Other parts of our infrastructure are even more substandard. One in eight of our nation’s bridges are structurally deficient, and more than 200 million trips are made across these deficient bridges in our 102 largest metropolitan areas each year. Many of these bridges have been poorly maintained and still handle heavy traffic. They are, on average, 42 years old. While repairs or new construction has begun on some, such as New York’s Tappan Zee Bridge, other neglected bridges are tragedies waiting to happen.

A strong infrastructure is an essential part of a sound economy. It makes it easier and more efficient to move both people and products. It provides jobs and other economic opportunities. On the other hand, allowing infrastructure to erode costs money. For example, ASCE reports that 42 percent of our nation’s highways are congested, costing $101 billion in wasted time and fuel each year.

In the name of reducing our carbon footprint, some will eschew roads for urban rapid transit, but mass transit is unevenly provided in many cities, often providing less service in poor neighborhoods. Public transportation is also woefully lacking outside urban areas, with 45 percent of the U.S. population having no access to public transportation. Business Insider’s Madeline Stone wrote that New York had the best public transportation system, followed by San Francisco and Boston. The Metro system in the nation’s capital doesn’t even make the Top 10 list. On a recent weekend, it operated at half capacity. What does that say about our infrastructure?

Whether we examine roads, planes, trains, waterways, bridges, dams or energy, ASCE finds our infrastructure pathetically inadequate. These deficiencies are costly drains on our economy, while investments in infrastructure generate sizeable returns. Moody’s economist Mark Zandi says that every dollar spent on infrastructure yields as much as $1.57 in gross domestic product.

The Amtrak derailment should be a warning about the status of our infrastructure. It ought to force us to think about ways we can avoid accidents and to operate more efficiently. It ought to motivate the kinds of investments that ASCE and others say are necessary. To ignore this reality is, to quote John Boehner, “stupid.”

Julianne Malveaux is an author and economist. She can be reached at www.juliannemalveaux.com.