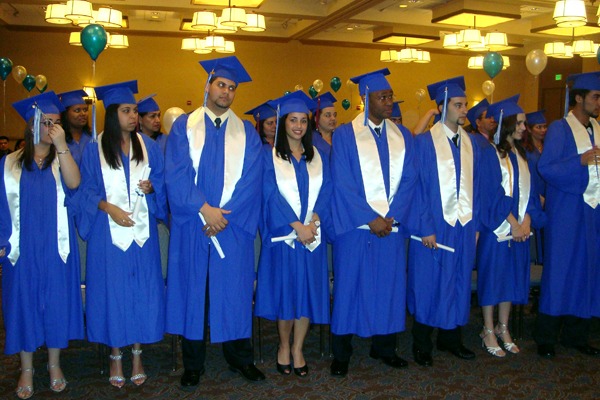 By the time you read this article, millions of college students will have graduated and be looking for jobs, many will be going on to grad school and millions will suddenly be faced with paying off college loans or contemplating obtaining a loan for graduate studies.  Neither option is attractive.

Even if students are fortunate enough to have a job when they graduate, if they are laden with tens of thousands of dollars in debt, it will be very difficult to save money for their future, pay living expenses and costs associated with the job they accept, and make $300-$600 in monthly payments for college loans.

For those moving on to grad school, unless they have a fellowship or some other kind of grant, they will have a tough decision to make when the loan officer at their school or the bank says, “No problem, here’s a $30,000 check to pay for your degree.”  I hate to think what it costs for an medical degree these days.

At more than $1 trillion, having surpassed credit card debt, college loan debt is an albatross around the necks of students, some of whom had no idea of what they were getting into and some who did know but refused to do anything about it until now, when it’s too late.

With the job market the way it is and has been for Black people for decades, some graduates will have an overpriced college degree without a commensurate job prospect. They will be faced with the challenge of paying back their loans while looking for a job that does not exist.  Or, they will have to accept the prospect of joining the ranks of the “underemployed.”

This is indeed a sad state of affairs for our best and brightest, the grandchildren of the baby boomers.  It is said that “millennials,” as they are called, are the first generation that will be worse off than their parents.  Most parents want their children to do better than they did, and most parents participate in that aspiration by putting a little money aside to help their children get off to a reasonable start in life.  However, in today’s economic climate, there is very little of that kind of help available from parents who are struggling just to pay the rent and keep the lights on.

What can we do?

High on our agenda should be a demand made, to Congress and whoever is running for president, for student loan debt forgiveness.  A strong, independent bloc of voters must go to candidates in both parties and make this demand.  Keep in mind, however, as I have said before, a demand without power backing it up is just rhetoric.  I think we have heard enough and had enough of empty words by some of our leaders to know that it will take more than just asking for what we want.  We must be willing to withhold our votes in order to get what we want—and that goes for both parties.

The banks and other financial entities got their $780 billion bailout. Where is ours?  Why not bail the students out, and why not bail the homeowners out rather than merely “adjusting” their loans?  The bankers were given billions that they used to make even more money from the taxpayers (That be us, y’all) who paid their bills.  Contrary to what we were told, lending was curtailed rather than expanded, and hundreds of thousands of folks are still homeless because there was no real bailout program for them.

The so-called American Recovery and Reinvestment Act, as of January 1, 2014, had paid out $816.3 billion in tax benefits, grants, contracts, loans; and entitlements.  Who got that money?  In my neck of the woods, the folks who got the most were those who worked on the roads and expressways; of those contractors and workers, few if any were Black.

Georgia recently embarked on a $1 billion-plus road improvement project, and even with 3.2 million Black folks in that state, the fourth highest in the nation, Black contractors and workers will not benefit as much as they should. Department of Transportation inclusion rules are based on Disadvantaged Business Enterprise (DBE) Programs, in which White female businesses get a significant share of the contracts, and “front” companies rule the day.

So with all of the barriers facing our 2015 graduates, and the bleak outlook for improvement of their lot, the least we could do is bail them out of their student loans.  Politicians said the banks were “too big to fail,” and I guess the bankers were “too big to jail.”  They caught a huge break from George W. Bush and Obama.  It’s time for a break for Black and poor people now.  Hey politicians, forgive student loans.

Jim Clingman, founder of the Greater Cincinnati African American Chamber of Commerce, is the nation’s most prolific writer on economic empowerment for Black people. He can be reached through his website, blackonomics.com. He is the author of "Black Dollars Matter: Teach Your Dollars How to Make More Sense", which is available through his website; professionalpublishinghouse.com and Amazon Kindle eBooks.