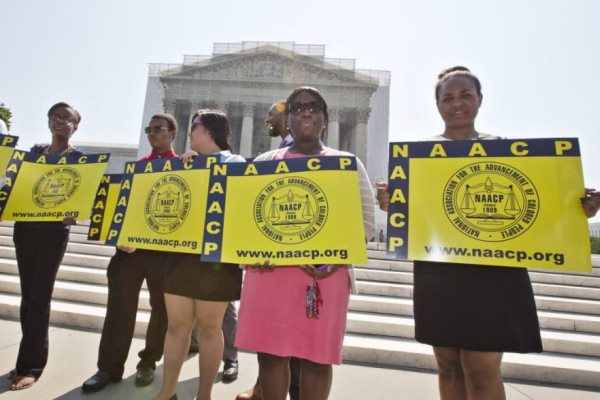 You won’t believe the latest tactics being used by the folks at the national and state levels of the NAACP. Then again, those of you who are familiar with their evil doings in the past will believe it.

You may recall that the Cincinnati branch won a temporary restraining order (TRO) against the national office for voter suppression in our local election process. Since that time, the Cleveland and Columbus branches have had similar run-ins with the national and state office, headed by Sybil McNabb, a lackey of Gill Ford, the national representative who has left a “trail of tears” across this country in various branches, by interfering with local elections and trying to “select” the candidates of his choice.
The Cincinnati branch is still in court, after several delays caused by the national NAACP and their local attorney. The final hearing on the matter will now take place in August, after depositions are taken from National President Cornell Brooks and Gill Ford, in Baltimore and St. Louis, respectively.
The latest attempt to circumvent the judge’s order in Cincinnati, and to get around similar issues in Columbus and Cleveland, comes from Sybil McNabb, who a couple of years ago during the state of Ohio NAACP election, in Chillicothe, Ohio, lost her bid to remain in that office. A young lady named Jocelyn Travis won, fair and square, but the election was overturned by Ford and McNabb, who refused to relinquish her office to Travis.
A new election was held, in which ineligible people and even children, I was told, were allowed to cast votes. Well, wouldn’t you know it? McNabb won. So now, I suppose in return for Gill Ford’s assistance to keep her on as state president, McNabb sends a letter out to Cleveland, Columbus, and Cincinnati, saying she will conduct an election in all three “Prospective” (Her word, not mine) cities on May 23, 2015, ignoring the judge’s order in Cincinnati.
If that doesn’t take the proverbial cake. Why do the state officers, local branch officials, and local members allow this kind of nonsense to go on without saying or doing anything about the likes of McNabb, Ford, and other NAACP leaders? What can they do to you? Fire you? How do you fire a volunteer? Members need to stand up and speak up against these wrongdoers. A cryptogram: “Never Accept Alibis from Corrupt People.”
If the three largest Ohio cities and I would add Dayton, Toledo, and Akron as well, cannot or will not stand up against corruption in the NAACP’s state and national offices, what’s the point of being a part of it all? If they can pull off what would be the biggest “back-down” and branch intimidation in their 106-year history, what will happen to the smaller, less-funded branches around the nation? They don’t stand a chance.
As if that sham of an election in Chillicothe, Ohio was not enough, we now have a tainted state president, operating under the aegis of Gill Ford, attempting to usurp the authority of a sitting judge in Ohio. What arrogance and disdain! I thought it was bad when Ford’s attorney suggested an election be held in Cincinnati anyway, despite the TRO, with only one candidate on the ballot – Ford’s. I was right, but shortsighted.
Now they have stooped to a new level with McNabb saying she will hold elections in the three largest branches in Ohio. A corrupt official holding honest and fair elections? Let me think about that for a second. Nah, I don’t think so.
These people would do anything to maintain control of the money that comes into the local branches, which is a major reason for the attempted takeover in Cincinnati. So since money is the underlying issue in the whole matter, here is what should happen, at least in Cincinnati, where the national NAACP convention is scheduled to be held in 2016.
If the corporations and other donors to the NAACP refuse to give these crooks their $200,000 – $300,000 as incentive money to hold the national convention in Cincinnati, it just might make them straighten up and fly right. If the national NAACP and its president, Cornell Brooks, who is also a minister, do not stop the voter suppression and their representative’s attempt to steer the local election his way, the corporate donors should refuse to give their money to bring the convention to Cincinnati.
As embarrassing as this is, it would be even more so if hundreds of thousands of dollars were given to an organization that purports to fight against “voter suppression,” and has filed suit against the State of Ohio under that rubric, to hold its convention in our city. What’s that called again? Hypocrisy? Yeah, that’s the word I was looking for.

Jim Clingman, founder of the Greater Cincinnati African American Chamber of Commerce, is the nation’s most prolific writer on economic empowerment for Black people. He can be reached through his website, blackonomics.com. He is the author of Black Dollars Matter: Teach Your Dollars How to Make More Sense, which is available through his website; professionalpublishinghouse.com and Amazon Kindle eBooks.