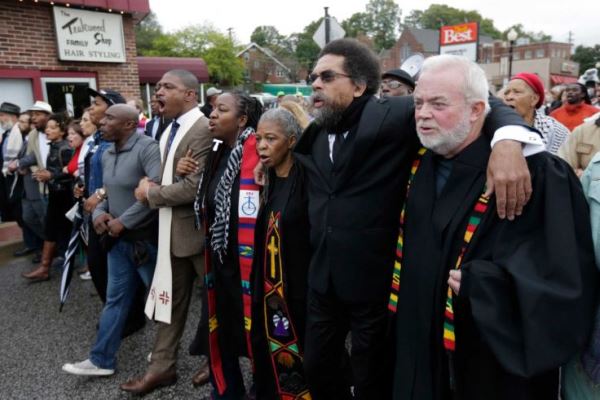 It’s the academic version of the world heavyweight championship boxing matches between Muhammad Ali and Joe Frazier in Zaire labeled “The Rumble in the Jungle” and the Philippine’s “Thriller in Manila.” Whatever label you attach to it, the public feud between Professors Cornel West and Michael Eric Dyson, two of our most gifted intellectuals, cannot be ignored.

Dyson’s original opus weighed in at nearly 10,000 words – four to five times the length of a typical magazine feature story – and landed plenty of punches to West’s body of work. Dyson charged that Obama’s inauguration marked “a pronounced and decades-long scholarly decline” for West.

He explained, “It is not only that West’s preoccupations with Obama’s perceived failures distracted him, though that is true; more accurate would be to say that the last several years revealed West’s paucity of serious and fresh intellectual work, a trend far longer in the making. West is still a Man of Ideas, but those ideas today are a vain and unimaginative repackaging of his earlier hits. He hasn’t published without aid of a co-writer a single scholarly book since Keeping Faith, which appeared in 1993, the same year as Race Matters.”

Despite other issues addressed by Dyson in his tome, at its core, this heavyweight fight is personal. In the interest of full disclosure, I know both Cornel and Michael and count each of them as a friend.

Except for the length of Dyson’s article, the only thing surprising is that he waited this long to reply to West’s attacks on him. And readers had to wait almost until the end of the article to learn what West specifically said about Dyson that so enraged him.

“In November 2012, West, friend and mentor, one of the three men whose name is on my Princeton doctoral dissertation, let me have it in the national media. It was during an appearance with Tavis Smiley on Democracy Now, shortly after Obama’s reelection. ‘I love Brother Mike Dyson,’ West said. ‘But we’re living in a society where everybody is up for sale. Everything is up for sale. And he and Brother Sharpton and Sister Melissa and others, they have sold their souls for a mess of Obama pottage. And we invite them back to the black prophetic tradition after Obama leaves. But at the moment, they want insider access, and they want to tell those kinds of lies. They want to turn their back to poor and working people. And it’s a sad thing to see them as apologists for the Obama administration in that way, given the kind of critical background that all of them have had at some point.’”

As Dyson wrote, “West was just warming up.” Dyson continued, “After a fiftieth anniversary celebration of the 1963 March on Washington on the National Mall, a celebration Sharpton led and at which I spoke, West argued that Martin Luther King Jr. ‘would’ve been turning over in his grave’ at Sharpton’s ‘coronation’ as the ‘bona fide house negro of the Obama plantation,’ supported by ‘the Michael Dysons and others who’ve really prostituted themselves intellectually in a very, very ugly and vicious way.’ And recently, while promoting Black Prophetic Fire, West argued ‘the Sharptons, the Melissa Harris-Perrys, and the Michael Eric Dysons … end up being these cheerleaders and bootlickers for the President, and I think it’s a disgrace when it comes to the black prophetic tradition of Malcolm and Martin.’”

West responded to Dyson briefly on Facebook, saying: “Character assassination is the refuge of those who hide and conceal these issues in order to rationalize their own allegiance to the status quo.”

Dyson responded to West’s response and pushback from other quarters with a second, 2,623-word article in The New Republic. Regarding his decision to publicly answer West, Dyson, quoting old folks who administered public spankings to children, said, “Where you did it is where you get it.”

Four years ago, I arranged and moderated a conversation between West and Sharpton at a National Newspapers Publishers Association’s convention in Chicago. It was a cordial and respectful conversation. However, it wasn’t long before West personally attacked Sharpton again. So I have little hope that a sit-down between West and Dyson would yield anything beyond a temporary truce.

In the end, West and Dyson will be judged not by the amount of flowery venom they can direct at each other – we’ve had more than enough of that already – but whether they can help find solutions for the array of vexing problems that still plague our people.

George E. Curry, former editor-in-chief of Emerge magazine, is editor-in-chief of the National Newspaper Publishers Association News Service (NNPA) and BlackPressUSA.com. He is a keynote speaker, moderator, and media coach. Curry can be reached through his Web site, www.georgecurry.com. You can also follow him at www.twitter.com/currygeorge and George E. Curry Fan Page on Facebook.