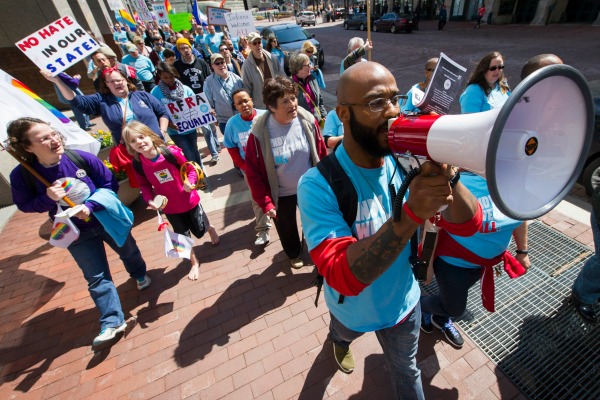 Worried by recent steady march of federal court decisions advancing the right of gays and lesbians to marry, they tried to copy the Supreme Court majority’s flim-flam maneuver of last year in the Hobby Lobby case: By asserting a business is a “person,” they intended to enable business owners to discriminate against gay and lesbian prospective customers, and anyone else under the cover of “religious belief.”

The blowback from corporate giants, religious denominations, cities and states, associations and organizations, and prominent entertainment and literary figures produced a thunderous roar succinctly expressed by the headline of the March 31 front-page editorial of the Indianapolis Star newspaper. In huge letters, it blared: “Fix This Now”

Suddenly, faced with the likelihood of devastating economic boycotts, the two states’ governors and state legislatures quickly complied. By week’s end last week they had amended those particular so-called religious freedom restoration laws to declare they couldn’t be used to discriminate against someone because of their sexual orientation and gender identity. (However, neither did either legislature enact specific statutes barring discrimination against, gays, lesbians and transgendered people.)

But no one on the right side of history should think this ends the anti-gay rights campaign. Nor should they forget this episode’s lessons.

For one thing, it’s underscored the true purpose of these “religious freedom” laws, which now exist in 19 other states and are being considered in an additional 14. That purpose, with the U.S. Supreme Court set to rule on same-sex marriage by this June, is to provide the anti-gay forces a means of escaping compliance with the seemingly inevitable affirmation of same-sex marriage by the federal judiciary.

Secondly, these wolf-in-sheep’s-clothing laws offer further proof that the GOP down to its very roots in state and local communities has devolved from a political party ruled by the old traditions of give-and-take politics crucial to the functioning of a democratic society. It’s become one driven by an unceasing winner-take-all attitude that’s only barely concealed beneath a thin veneer of ultra-conservative religious dogma.

Further, we should remember that the justifications for these laws are classic examples of the “hustle” used to pretend bigotry is not bigotry: those who want to discriminate against a particular group claim it’s that group, backed by “the government” who are “victimizing” them.

So, Indiana Gov. Mike Pence could assert, shortly after he signed the original state law, that “many feel their religious liberty is under attack by government action” in forcing them to accept gays and lesbians as customers of their businesses.

One doesn’t have to be that well-versed in the Southern massive-resistance campaign against the Civil Rights Movement of the 1950s and 1960s to note the tawdry similarity: That region’s politicians also vociferously claimed that they were defending white citizens’ against attack by the federal government. And, as numerous other commentators have noted, many Southern Christians cited Biblical passages to justify their racism.

The rationales for today’s anti-gay laws are just as despicable. Their advocates claim they’re needed because, as Eric Miller, executive director of the conservative group Advance America, said they could help Christian bakers, florists and photographers avoid punishment for “refusing to participate in a homosexual marriage.”

Got that? Miller contends that any business owner who sells an item to or performs a service for a customer thereby becomes a “participant,” and “involved” in whatever it is the customer proceeds to do with the item. If you think that’s silly, look up some of the segregationists’ rationales for all the grand and petty laws of Jim Crow for further proof that bigotry is impervious to logic

The historian Jarret Ruminski ended his recent column on this latest effort to cloak intolerance in law with these words: “If I wanted to argue from a religious standpoint, I’d point out that rabid anti-gay stances conflict with Jesus’ injunctions to ‘Do unto others as you would have them do unto you.’ And to ‘Judge not, that ye be not judged.’ Finally,” he wrote, “if I wanted to argue from the standpoint of basic human decency, I’d argue that love is always better than hate, and that hate shrouded under the banner of good intentions and blind moral absolutism is especially devious.”