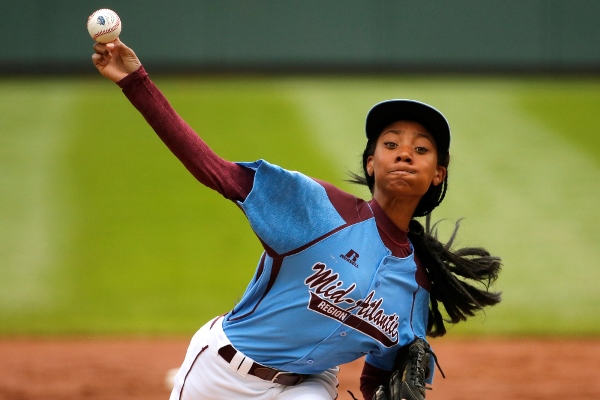 In the course of one week we witnessed the burden of being young, gifted and Black.

First, the Little League baseball phenom Mo’ne Davis was insulted by a White college baseball player who called the abundantly talented young girl a ‘slut’ in a Tweet in response to news that Disney was planning to make a movie about her incredible rise to fame. The player, Joey Casselberry, quickly retracted the tweet in the face of a wave of criticism in cyberspace but was promptly dismissed by the Bloomsburg University team.

Then there were the toxic tweets from Jenna and Jacque Huggins, the daughters of West Virginia head basketball coach Bob Huggins, calling Maryland basketball player Dez Wells a rapist. The West Virginia team defeated Maryland in an early round of the NCAA championship tournament. The Terrapins star guard had been kicked off the Xavier University team in 2012 after being accused of sexual assault. A grand jury decided charges against Wells were not warranted and he later settled a lawsuit he brought against Xavier.

Not far from the Morgantown campus of the University of West Virginia and College Park home of the University of Maryland, a young, Black University of Virginia undergraduate student was accosted by police. Martese Johnson had his face bashed into the pavement and bloodied by Virginia Department of Alcoholic Beverage Control (ABC) agents outside a pub near the UVA campus. The episode was captured on videotape. Johnson had proper ID and was not resisting arrest when the ABC agents pummeled him, causing injuries that required 10 stitches in his head.

What these three incidents have in common is obvious – Mo’ne Davis, Dez Wells and Martese Johnson are all young and Black. Lurking just beyond the obvious tie is the quality of their blackness – they are all gifted and confident in their identities. It seems in 21st century America to be young, gifted and Black is now a crime; an offense against society’s typecasting of Black youth as violent, unintelligent and worthless.

The intensity of these assaults – oral and physical – is sharpened by decades of conditioned hate, forged by theories of Black inferiority and White supremacy. The venomous words electronically spat upon Davis and Wells, and the force leveled upon Martese Johnson, are simply the byproducts of the permissiveness of racism in our nation.

It is the success of Davis, Wells and Johnson that defies and counters the mythology of Black depravity. And it is success that triggers the backlash, awakens the racist beast and brings to the surface sentiments that heretofore might have only been expressed in private conversations. By succeeding these young people frustrate those who harbor bias and leave them little room to fully exercise their demons. For some, touch pad keystrokes become a potent weapon to voice hatred from afar; sort of the lazy man’s racism that tempers it but still empowers the perpetrator. The police involved in the micro-aggression at the University of Virginia? They were acting under the assumption of “Black threat” and sending a message in the process.

This is the cruel joke played upon Black youth in America. The public message communicated to young Black women and men is to pursue excellence and rise above challenges, and be exemplary in their civic lives. That message is countered by the aural and visual assault upon their sensibilities that reduces them to thugged out and hyper-sexualized caricatures. When young Blacks rise above this stereotyping, they are then reduced to racial objects, ridiculed for being audacious in their success.

Mo’ne Davis was a “slut” in the eyes of a young White male because he believes her success is undeserving of the attention it is receiving. The privileged White daughters of a basketball coach of a major university made the determination a grand jury could not, on a charge a university could not prove and was forced to reach settlement with the accused.

Still, Dez Wells is branded a rapist because he excelled on the basketball court. Martese Johnson was just another young Black guy, a human punching bag for police who could casually dismiss the thought that they were bloodying a student enrolled in the nearby prestigious university, or more importantly, a human being and someone’s son.

Collectively, these incidents bring into sharper focus the racist rants of former University of Oklahoma SAE fraternity members in that now infamous videotape. This is the world in which young Black Americans live. It is a sobering reality that a generation that many hoped would truly be post-racial (as if that will ever be the case) is more deeply entrenched in racism than the prior generation. And institutional racism has a vice grip upon young Blacks that is more consequential than white mobs of decades past.

It’s enough to make me take a trip to the nearest Starbucks. I’ll take a latte with some truth talk.