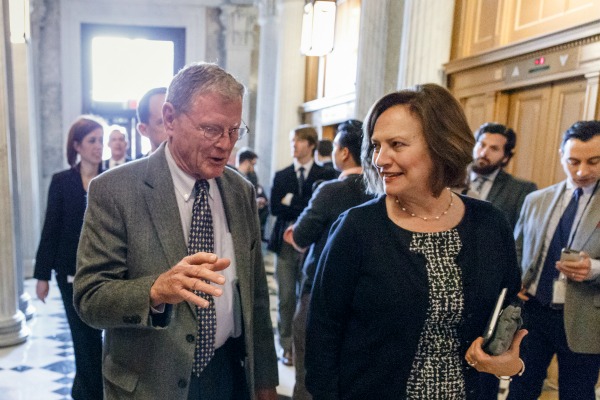 Among the formal definitions for “acting the fool” are: one who is deficient in judgment, sense or understanding.

Perhaps the dictionaries should add a new one: today’s Republican Party

February was a great month for those who think the GOP has become a dustbin of ideological extremists with no commitment to actually getting things done in Washington, elected officials easily led into ethically questionable dealings, and office-holding crackpots with bizarre beliefs about some of the most important issues of the day.

For example, in the Congress the GOP leadership has been frantically trying to tamp down House conservatives’ threat to force a shutdown of the Department of Homeland Security over President Obama’s executive order on immigration. At the 11th hour, they kicked the can down the road by providing only a week of additional funding.

On the crime front, Maureen McDonnell, Virginia’s former First Lady, drew a lenient sentence of a year and a day in prison for her participation in the tawdry petty corruption scheme that also led to the conviction last year of her husband, former Virginia Gov. Robert McDonnell. Once considered a prime contender for the 2016 GOP presidential nomination, McDonnell himself had been sentenced in January to two years in prison.

For comic relief, there was the Idaho Republican state representative who, seemingly confused about the female anatomy, asked a doctor during a legislative hearing whether women could swallow small cameras to help doctors do remote gynecological exams. Even more hilarious was Nevada Republican legislator Michele Fiore expressing her belief that cancer is “a fungus” that can be cured by “flushing, let’s say, saltwater, sodium carbonate” through the body.

While that comment immediately raced around the Internet, too, many news media felt compelled to note, as the Washington Post did: “Cancer is not a fungus. It is the uncontrolled division of abnormal human cells within the body. Saltwater cannot cure cancer.”

Not to be outdone back in Washington, Oklahoma Senator James Inhofe, the chairman of the Senate’s Environment and Public Works Committee, jumped aboard the party comedy train when he brought a snowball into the Senate chamber from the minuscule dusting of snow Washington got that day and said it proved there was no such thing as global warming.

But a lion’s share of media attention on the GOP for much of the month was, rightly, devoted to former New York City Mayor Rudolph Giuliani’s claiming that President Obama “doesn’t love America” because he “wasn’t brought up the way you were brought up and I was brought up through love of this country.”

Amid the immediate blowback, Giuliani then made the cable news show rounds the following days to double down that his comments couldn’t be called racist “since [Obama] was brought up by a white mother, a white grandfather, went to white schools, and most of this he learned from white people.” The “this,” he implied, was Obama’s “socialism or possibly anti-colonialism.”

By February’s last week, however, Giuliani had penned an oily op-ed in the Wall Street Journal meekly stating he “didn’t intend to question President Obama’s motives or the content of his heart. My intended focus was the effect his words and his actions have on the morale of the country and how that effect may damage his performance.”

Of course, the article was a sure sign that conservative movement chieftains had warned him of the damage he was doing to Republican efforts to get its 2016 presidential primary sweepstakes off to a good start and deal with its intra-party rebellion in Congress.

She’s right that Giuliani was reflexively following the standard GOP script of the last seven years: When you want to grab public attention and the plaudits of the conservative base, say something vile about the president.

One of the most obvious insights that offers is that because racism is impervious to logic, the achievements of individuals and even a large cohort of those the bigots hate doesn’t just expand the space for tolerance in the larger society. It also actually intensifies the fury of those who need to cling to their bigotry. As an old friend once put it: the bigots say they hate you because you’re inferior. But when you prove you’re more than equal, they hate you even more.

That’s why, during the Obama presidency, acting the fool has become the Republican Party’s chief operating principle.