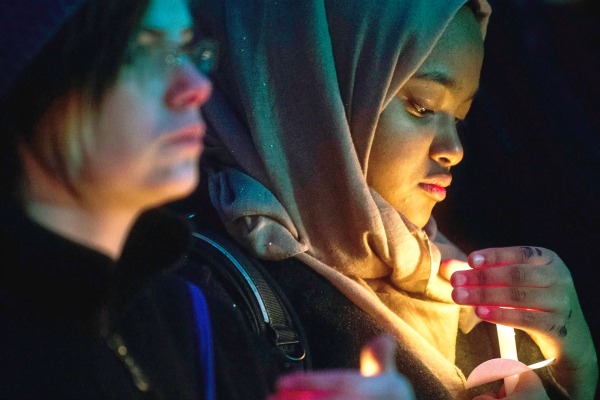 University of Michigan-Flint freshman Lina Eltahir, 17, right, stands with others at a candlelight vigil at the school in Flint, Mich., in memory of three people who were killed near UNC-Chapel Hill, N.C. Vigils across the county popped up in the wake of this tragedy. Photo by Jake May, AP.

Within days of the murders of three Muslims in Chapel Hill, N.C., a crazed gunman shot several people in Copenhagen, allegedly targeting an illustrator who caricaturized the Prophet Muhammad. One could not have contrasted the media’s response more starkly.

In this regard the right-wing response to President Obama’s Prayer Breakfast remarks about the manner in which religion can be used to justify heinous crimes is relevant.

Those who attacked Obama for suggesting that horrors have been committed in the name of Christianity, along with other religions, have decided that it is appropriate to defy historical facts.

One example, which President Obama did not mention, was the Holocaust carried out against the Jews by the Nazis. The Nazis saw themselves as being good Protestants. They even expressed contempt for Catholics!  This is a documented fact. This is not about interpretation and it is not about rhetoric.

Those who ignored the Chapel Hill murders, and/or those who seek to deny that it is a clear example of a hate crime, are those who wish to ignore history and the historical context of these killings.

Muslims and non-Muslim Arabs have been the subject of long-running attacks, caricaturizations, racist insults, and, yes, lynchings, since well prior to the 11 September 2001 terrorist assaults.  Though “children of the Book,” Muslims in the U.S. have never been accepted within the Judeo-Christian binary but have been treated as “other.”  They have been a source of mystery in the mainstream, a group to be tolerated during the best of times and demonized during the worst.

Arabs have had a very contradictory relationship to U.S. history, in part depending on whether they are Muslim, Jewish or Christian, and also depending on what period in history they arrived in the country. Many Arabs assumed a “White” identity for as long as they could, resulting in complicated and often tense relations with other communities of color.  After 11 September 2001, all Arabs found themselves in the category of notorious people of color.  There will be no exit in the near future.

The Chapel Hill killings and the initial anemic media response was quite similar to the response to the lynchings of other peoples of color, whether African American, Latino, Asian or Native American. These are killings to be excused away, to be blamed on an individual, at best, or, under certain circumstances, to be blamed on the victim.

This is what is at stake when we hear that the killings may have been about a parking space. Instead of taking seriously the fears and concerns that the victims had prior to their deaths, many mainstream commentators have ignored this altogether, not to mention ignored the larger social/political climate that describes any violent act by a Muslim or Arab as an act of terrorism, and any act against a Muslim or Arab as potentially justified, irrespective of how horrendous.

Did someone say that this was a post-racial society?

Bill Fletcher, Jr. is the host ofThe Global African.  He is a racial justice, labor and global justice activist and writer.  Follow him on Twitter, Facebook and atwww.billfletcherjr.com.