Laws, Law Enforcement, and Our Community by Rep. Lew Frederick 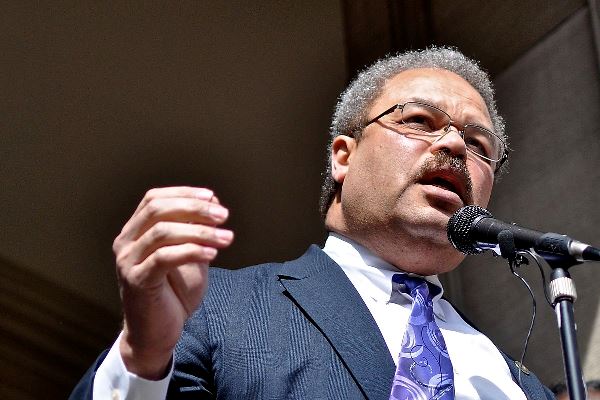 I have been talking about public safety and policing issues since long before I ran for the Legislature; they are unavoidable for any of us with direct experience of suspicion based on appearance. I’ve introduced bills in two sessions before. The current high profile of policing issues around the country means that it’s time to make changes. The good news is that the reception these bills are getting is substantially different this time.

We know that profiling is a reality; I’m having more success these days explaining that to decision makers who don’t have that direct experience. Beyond the anecdotes that we can tell, every time it is studied it is confirmed. Individuals who are visually identified as minorities are stopped more often, cited more often, searched more often, arrested more often, charged more often, convicted more often and sentenced more harshly. When search outcomes have been studied, they have found that minority subjects were less likely to be carrying contraband, although the greater number of searches could skew that number somewhat. And while it doesn’t make the news, often the crimes they are charged with are crimes of poverty.

One of the most important things that I think is finally getting through is that these interactions are escalated before they even start, due to the breakdown of trust between minority communities and the police. You could probably put a blood pressure monitor on both parties and show a level of tension and fear that goes beyond what anybody would feel when being pulled over for a driving mistake they know they actually made.

When these stories make the news, and the public is left, in the end, with a story that just doesn’t make sense, that lack of trust is both reinforced and spread deeper into the community. Why did that interaction with police begin in the first place? Why did it escalate so rapidly? Why is the officer still policing my neighborhood? The public is left without answers, and that feeds the assumptions brought to the next interaction. If that officer could shoot that other guy for no reason that I can make sense of, then he could shoot me this time, no matter what I do. The more that fear penetrates into the community, the less legitimate our policing function seems, and that is a true breakdown, and should concern us all. I hope, and I believe, that people of conscience, as well as people of civic responsibility, are finally recognizing the gravity of that danger.

Dr. King said, in 1964, “It is true that behavior cannot be legislated, and legislation cannot make you love me, but legislation can restrain you from lynching me, and I think that is kind of important.” The laws we currently have are not protecting us. That’s why I am working on these issues in the Legislature. I think we’re all tired of hearing about “having a conversation.” Social progress toward real equality is the goal, but sometimes the law has to lead the way.

I have introduced three bills to address the issue of profiling in three different ways, HB 2001, HB 2002 and HB 2003; the same three issues are being introduced in one bill in the Senate. They were filed pre-session, and first readings took place on the first day. I want to acknowledge the extensive research and persistence that Salomé Chimuku of the Center for Intercultural Organizing contributed to preparing the concepts for these bills (and thank her in advance for the work she’s likely to do on them through the session).

HB 2703 phases in body cameras on officers. In other jurisdictions that use them, the incidence of escalation and use of force has gone down; they put everybody on their best behavior. The bill I’ve introduced calls for the cameras to be controlled and monitored, and the records retained, by a third party. HB 2702 clarifies that recording an officer in the performance of his or her duties is not, by itself, interfering with those duties.

HB 2701 expands psychological evaluation and support for police officers, both after an incident and as a regular check-in. Policing is indeed stressful work, and requires special support.

Finally, I have re-introduced several bills having to do with how we train for, investigate and resolve incidents of the use of deadly force by police officers, because it is crucial that all of our communities be able to expect justice under the law, before, during and after encounters with police officers: HB 2699, HB 2705 and HB 2702. I am likely to introduce additional concepts before I’m done.

I ask you to use the tools available to follow this legislation as it works its way through the process. The Legislature works best when it is watched, nudged and prodded. Use the Oregon Legislative Information System to follow bills and find hearing dates (https://olis.leg.state.or.us/), and show up, either to testify or simply to show your attention, support and concern.

My message to the community is that this is our time to bend that arc of the moral universe toward justice. Let’s all pull.

Voting rights will be the theme of The Skanner News' 29th Annual Martin Luther King Jr. Breakfast this year being held on Jan. 19, 2015 this year. Follow the hashtags #KingBreakfast2015 and #SK40Years on Twitter, Facebook and Instagram for the latest on the event and The Skanner happenings in celebration of our 40th year in operation.