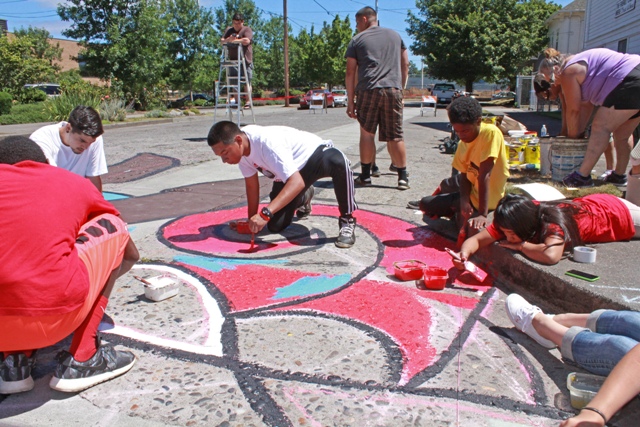 One of those injured boys played basketball for the Ockley Green team when my own son played in the same league. And Rosemary Anderson, just around the corner from The Skanner News offices, has helped thousands of students succeed in school and work.

So even though I was 4,600 miles away when the shots were fired, like so many of you, I felt the impact.

Last Saturday, visiting the Samye Ling Buddhist center in a snowy Scottish valley, I spun prayer wheels for those students and their families. I gave the prayer wheels some extra spins for all the Portland people who are working to stop this kind of violence. And because the Buddhists say compassion knows no limits, I spun out prayers for the shooters too. Thankfully, the three hospitalized students escaped death and seem to be on the mend. We all hope these innocent victims recover completely.

We don't know why the attackers chose this place and these students as their victims. But when violence breaks out, especially at an intersection dedicated to peace, it feels like a setback.

Yet just two days before the shooting, I saw evidence here in Scotland that suggests Portland is making all the right moves to end youth violence. Here’s the proof.
Last year, violence in Scotland fell to a new low. The murder rate in Glasgow is now half what it was in 2004. And for the last four years gang violence has dropped dramatically with 34 percent fewer hospital admissions for knife crimes. That’s a dramatic change for a city where gang violence was seen as a weekend sport.

Retired Chief Superintendent John Carnahan who, from 2009, led a violence reduction initiative in the city, credits a collective effort, based, in fact, on initiatives in American cities such as Boston.

“We understood it wasn’t a policing issue,” Carnahan told BBC Scotland on Dec. 9. “We had to think more about prevention than retribution and arrest, because we’re very good at that (already).”

Carnahan said a collaborative effort came together, that included social workers, health workers, housing providers, teachers, parents and community members.
“We brought people in and said the community is sick of this. If you want to stop doing this we’ll help you do something else.”

Now, Glasgow schools are expelling 85 percent fewer students. And 80 percent fewer youth are entering the Scottish youth justice system. Stiffer sanctions against carrying weapons, education programs in schools, and efforts to reduce alcohol abuse were also part of the story. And nobody pretends the work is done.

What's encouraging is that Portland is already doing the same things that Carnahan credits for Glasgow’s success. The Community Peace Collaborative meets most second Fridays in the Northeast precinct. Thousands of people across Multnomah County are committed to empowering disadvantaged youth. And Portland has a wealth of Black and other minority leaders –both newly minted and experienced– to inspire pride, ambition and self-respect.

The two cities are very different, but they have some common problems.

There are big differences too, especially in the levels of resources and support available to families. In Scotland, students can go to college for free.

But if working together as a community is the key to ending youth violence, Portland will succeed.  Former Youth Violence Prevention Director Rob Ingram ran far and fast towards this goal. His motto was “Can’t stop, won’t stop.”