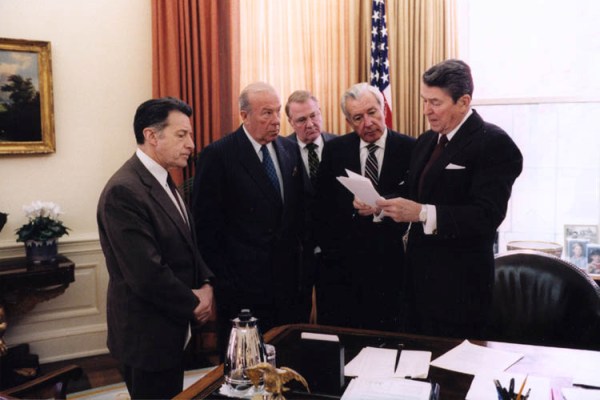 Carmelo Ruiz-Marrero Special to the NNPA from The Final Call
Published: 10 November 2014

President Ronald Reagan, right, and Secretary of Defense Casper Weinberger during a briefing on April 30, 1987, in Washington.

In late 1986, Washington was rocked by revelations that the Ronald Reagan administration had illegally aided a stateless army known as the contras in Central America.

Thus began the Iran-Contra scandal. The Contras were an irregular military formation put together by the U.S. Central Intelligence Agency (CIA) in 1981 to overthrow the leftist Sandinista government of Nicaragua. The war they provoked caused tens of thousands of deaths and devastating damage to Nicaragua’s economy.

Reagan’s aid was illegal since Congress had banned it. The Reagan administration responded to the congressional ban by setting up secret and illegal channels to keep the Contras supplied and armed. The operation was directly supervised by the office of Vice-President George H. W. Bush, who himself had headed the CIA in the 1970s.

The Contras also benefited from collaboration with South American cocaine cartels. This explosive information was uncovered at least as early as 1985 when Associated Press reporters Robert Parry and Brian Barger co-wrote an article that cited documentation and witness testimony from inside both the Contra movement and the U.S. government implicating nearly all Contra groups in drug trafficking.

John Kerry, then a U.S. senator, carried out an investigation into illegal Contra activities, including drugs, as head of a Senate subcommittee. His investigation was all but ignored by the mainstream media, which was busy covering the congressional Iran-Contra hearings, the ones that made a celebrity of National Security Council staffer Oliver North.

In 1996, the subject of Contra drug dealing reappeared in a series of investigative articles by reporter Gary Webb published by the San Jose Mercury News in California.

For these articles, Webb was savaged by fellow reporters and editors, particularly from the Washington Post, the New York Times and the Los Angeles Times. The Mercury News buckled under the pressure and got rid of Webb.

Unemployed, shunned by his own colleagues and practically abandoned by progressive sectors that had lost interest in the Contra story, Webb took his own life in 2004. His journalistic saga and tragic end are the subject of a new Hollywood movie called “Kill The Messenger.”

Some insist that Webb was assassinated by the CIA. Regarding this, Robert Parry, who was friends with Webb, wrote:

“Some people want to believe that he was really assassinated by the CIA or some other government agency. But the evidence of his carefully planned suicide—as he suffered deep pain as a pariah in his profession who could no longer earn a living—actually points to something possibly even more tragic: Webb ended his life because people who should have supported his work simply couldn’t be bothered.”

What’s truly tragic and ironic in this whole affair is that the main allegations in Webb’s Contra reporting had been confirmed in 1998 by a CIA report authored by the agency’s inspector general, Frederick Hitz.

But the mainstream media alleged that the report cleared the CIA and the Contras of drug trafficking. The report indeed concluded that the CIA had not conspired to fund the contras with the help of drug cartels.

But Hitz, now a scholar at the University of Virginia’s Center for National Security Law, said in the report that the war against the Sandinistas had taken precedence over law enforcement, and that the CIA had evidence of Contra involvement in cocaine trafficking and hid it from the Justice Department, Congress, and even from the agency’s own analytics division.

Hitz interviewed CIA officers who confessed to him that they knew of Contra drug trafficking but kept quiet about it because they thought that such disclosures would undermine the fight against the Nicaraguan regime.

He also received complaints from agency analysts to the effect that field officers who worked directly with the Contras hid evidence of drug trafficking, and that then, working with partial and incomplete information, they concluded that only a few Contras were involved with drugs. On Oct. 10, 1998, the New York Times ran a piece attacking Webb’s credibility while acknowledging, as if it were a minor detail, that Contra drug dealing was worse than the newspaper had originally estimated.

In September the CIA declassified a number of articles from its in-house journal Studies in Intelligence. One of these showed that the agency was genuinely distressed by Webb’s Contra articles, and that it took active steps against him, relying on “a ground base of already productive relations with journalists.”

The article even brags that the CIA discouraged “one major news affiliate” from covering the story.

The article’s author tries to fathom the hostility of broad sectors of the U.S. population toward the CIA: “We live in somewhat coarse and emotional times—when large numbers of Americans do not adhere to the same standards of logic, evidence, or even civil discourse as those practiced by members of the CIA community.”

Carmelo Ruiz-Marrero is a Puerto Rican journalist. This commentary was distributed by Inter Press Service and written in San Juan.