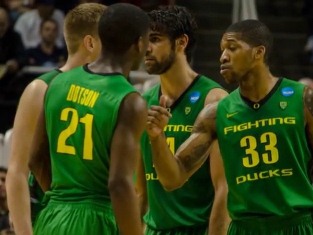 Despite their 12th seed, the underdog Oregon Ducks had two big wins over the first weekend of the NCAA Tournament.

The Ducks began their run on Thursday with a 68-55 victory over the 5th seeded Oklahoma State Cowboys. Oklahoma State featured guard Marcus Smart, who is projected to be selected number two overall in the upcoming NBA Draft, according to NBADraft.net. ESPN singled out Ducks' forward Arsalan Kazemi as the top player for the game. Kazemi recorded 11 points, a game-high 17 rebounds, two assists and two steals.

The Ducks continued their strong play on Saturday with a 74-57 win over the 4th seeded Saint Louis Billikens. According to ESPN, the Ducks' Damyean Dotson took top player honors for the game. Dotson recorded 23 points, three rebounds and two steals while shooting 8-12 from the field and 5-6 from the three point line.

Oregon will look to extend their run on Thursday when they face the number one seeded Louisville Cardinals in the Sweet Sixteen. The Cardinals feature point guard Peyton Siva, shooting guard Russ Smith, who averages 18.5 points per game, and center Gorgui Dieng, who is slated to be a first round pick in the NBA Draft, according to NBADraft.net. The Sweet Sixteen matchup will tip-off at 4:15 PST on CBS.