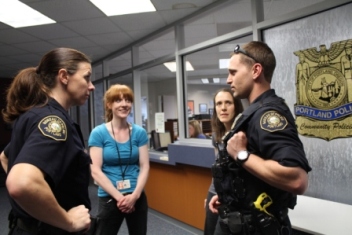 PHOTO: Police and mental health clinicians work together in the Behavioral Health Unit created as part of civil rights settlement between the City of Portland and the Department of Justice

For over a decade advocates for people with mental illness have steadily watched one police reform effort after another launch grandly and flop summarily. The settlement in DOJ v. City of Portland has been, from our point of view, just one more flop.

According to police, most of the agreement items are well underway, and many are finished. But with no decrease in police violence toward persons with mental illness those “well underway or already complete” fixes show their unilateral actions to be unsuccessful.

Mental health advocates opposed the settlement of DOJ v. City of Portland because it does not protect our friends from certain and continuing harm by police officers. The evidence of failure is already available. The homeless are still routinely hassled and routed; two persons with mental illness were shot and killed by police officers so far this year; it took 100 officers to collect a young sick man waving a air pistol on Labor Day.

The settlement agreement calls for an independent court monitor to report to U.S. Judge Michael Simon and to the Portland City Council on the implementation of over 100 action items.

The court monitor, called a “Compliance Officer / Community Liaison,” or COCL, must scrutinize fixes made by the police and report on progress or lack thereof. With a broad perspective developed from substantial experience, the COCL will be tasked with evaluating what has been done - and what ought to be done - to improve safety from police officers for persons with mental illness.

To be effective and assert justice, the COCL must bring a complex set of skills to this work.

• The COCL must have the ability to listen to people who have mental illness and understand their experience, from their perspective - not a police perspective, not a neutral perspective, not a clinician’s perspective. Only the perspective credentialed by lived experience of mental illness will illuminatesolutions and should guide implementation, from a potent mix of compassion, presence, resources, authority and action. Further, the COCL must be able to distill that lived experience into an assessment of trust - not by meeting a vetted set of advocates, but by listening to a wide variety of people, some of whom may be reluctant to talk due to mistrust of police and repeated city outreach failures.

• The COCL must be adept at issues concerning racial justice, because persons of color who also have a mental illness are at extreme risk of police violence. Additionally, their friends, families, neighbors and caretakers need to gain trust and confidence that police officers won’t bring more danger than help when called to a crisis.

• The COCL must know how a confluence of collected data influences both police actions and oversight. Use-of-force by officers is closely tracked by the PPB in-house, but as of today, no independent and empowered person has had access to those files or the resulting data. A successful COCL will show past experience extracting and analyzing data to determine whether police and the city are in compliance with the court agreement.

• The COCL must have demonstrated capacity to speak truth to power and hold the police bureau, its administrators and individual officers, accountable to the settlement, both items and spirit.

The three current candidates to be presented to City Council do not have the sufficient qualifications to be successful in the COCL position. They appear to be thoughtful men, each with an aspect of the qualities needed, but a quick scan of their resumes shows none are fully capable to monitor DOJ v. City of Portland.

To accept the current candidates is to resign the city to another layer of police oversight and eventual failure; and to promote all or any as a best candidate expects a rubber stamp of approval.

City Hall, by disrespecting the concerns of our community, tries to spoon-feed us the agreement, and we’re supposed to say it’s tasty. Actually it makes us trust the city’s police even less than we did before.

After being routinely ignored, our community needs a sign of good faith - such as a public announcement the city has rethought its blind rush to tap any candidate in a storm.

Secretary, on behalf of the