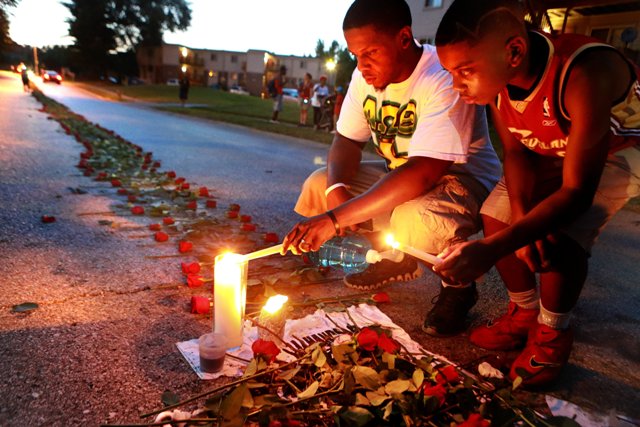 In this photo taken on Thursday, Aug. 21, 2014, Theo Murphy, left, of Florissant, Mo., and his brother Jordan Marshall, 11, light candles at a memorial on Canfield Drive in Ferguson, Mo., where where unarmed Michael Brown was fatally shot by Ferguson Police Officer Darren Wilson. A small group of people, who preferred to remain anonymous,laid roses along the middle of the road that stretched about 60 yards. (AP Photo/St. Louis Post-Dispatch, Christian Gooden)

Out of every momentous national tragedy that Black Americans have continued to endure in the United States, there has always emerged a redeeming moment to push harder and further on the long journey toward freedom, justice and equality. The continuing unrestrained fatal police killings of Black American males in St. Louis County, Mo., is now described as part of a national “open season” to kill Blacks in America. What should we do now? What is the redeeming action that should be taken?

In the aftermath of the murders of Michael Brown, Eric Gardner, Trayvon Martin, Jordan Davis and so many others, what should be our next course of action? Dr. Martin Luther King, Jr., writing in his last book, pointed the way.

Writing in Where Do We Go From Here: Chaos or Community? Dr. King stated in 1967: “The persistence of racism in depth and the dawning awareness that Negro demands will necessitate structural changes in society have generated a new phase of white resistance in the North and South.’’

Dr. King’s prophetic words, written 47 years ago, are equally true today. With the “browning of America,” there has been a steady increase in racially-motivated police violence against Blacks and Latinos.

The tragic murder of Michael Brown by police officer Darren Wilson in the St. Louis suburb of Ferguson has reverberated around the world. It is just the latest example of a society that refuses to end racial oppression or acknowledge its racist past. I remember that Dr. King responded to police brutality in the 1960s by telling his followers: “I am not unmindful that some of you have come here out of great trials and tribulations. Some of you have come fresh from narrow cells. Some of you have come from areas where your quest for freedom left you battered by the storms of persecution and staggered by the winds of police brutality. You have been the veterans of creative suffering. Continue to work with the faith that unearned suffering is redemptive.”

As we say of faith-witnessing in the Black church tradition, “Lord, have mercy, we sure have received a lot of unearned suffering…… now it is time for us to get some redemption.” This bring me to my central point. With all that is going on in Missouri, Florida, Texas, North Carolina, Michigan, Ohio, New York, California, Louisiana, Illinois, Washington, D.C. and elsewhere, we must transform our anger over police brutality, poverty, and economic inequality into a massive voter turnout. We should be preparing right now in every voting precinct in every congressional district and in every state where we live to have an unprecedented high voter turnout this November. We did it in 2008 we did it in 2012 and we can do it again in 2014.

Too often we live in communities where we have the potential margin of victory for local, congressional, statewide and national elections, but we simply do not go to the polls and vote, even though so many of our people died, bleed, went to jail, and “suffered” for us to get the right to vote. Having a right to vote is not enough. We all must exercise the right to vote not once but in every election. It’s extremely important that we do so this year because people expect us to because Obama’s name will not be on the ballot and mid-term voting is traditionally lower than in presidential years.

Voting our political, economic and spiritual interest is not only “redemptive,” it is also the right thing to do. Very often police officers are not prosecuted for acts of racial violence against Black Americans because locally “elected” prosecutors and district attorneys get elected and stay in office because we do not vote at the rate that we should. Citizens in Ferguson, Mo., a community that is at least 2/3 African American, only vote at a rate of about 12 percent – about a third of their representation in the population. That is a terrible reality that must now change. Understand, I am not saying that voting in record numbers will solve all the problems that we face in America. But what I am saying clearly is that our failure to understand the power of the vote holds back our progress in the United States.

I was so proud to see thousands of people marching nonviolently every day in Ferguson in protest to Michael Brown’s murder. The unified chant, “Hands Up, Don’t Shoot,” captured the energy and aspirations of millions more throughout the country and indeed around the world. Let’s keep that energy going strong. Let’s remain vigilant, vocal and visible. As we move forward over the next 60 days, let’s also organize and mobilize to register to vote and to massively turnout the vote everywhere. Election Day should be Pay Back Day. Let’s also begin to chant “Hands Up, Vote!” Let’s make the difference.

Benjamin F. Chavis, Jr. is the Interim President and CEO of the National Newspaper Publishers Association (NNPA) and can be reached for national advertisement sales and partnership proposals at: [email protected]