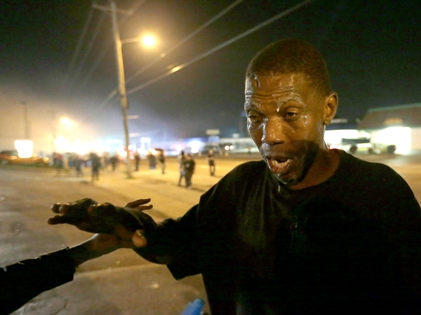 A man tries to recover after being treated for tear gas during a protest Monday, Aug. 18, 2014, for Michael Brown, who was killed by a police officer Aug. 9 in Ferguson, Mo. Brown's shooting has sparked more than a week of protests, riots and looting in the St. Louis suburb. (AP Photo/Charlie Riedel)

On the surface, the unrest in Ferguson, Mo., was about local police using deadly force on an unarmed young man. But on a deeper level, it reflected the increasing poverty and economic decline that affects ethnic communities all over America.
Despite rosy reports in the media about the end of the national foreclosure crisis and the recession that followed, all is not well in our inner cities and suburbs with largely minority populations, like Ferguson.
The foreclosure crisis was hard on many Americans, but it was a disaster for communities of color, including the citizens of Ferguson.

Half of Ferguson Homes Underwater

In the zip code that encompasses Ferguson, half (49 percent) of homes were underwater in 2013, meaning the home’s market value was below the mortgage’s outstanding balance. This condition (also called “negative equity”) is often a first step toward loan default or foreclosure, according to the recent report, “Underwater America,” from the Haas Institute for a Fair and Inclusive Society at the University of California, Berkeley.

Mortgage lenders targeted predominantly black and Hispanic areas for the highest-risk, highest-cost types of mortgage loans, such as adjustable-rate mortgages and loans with high prepayment penalties. This led to higher-than-average default rates, according to the Housing Commission established by the Bipartisan Policy Center in Washington, D.C.

Many of the families that were sold risky mortgages had good credit, decent incomes and everything else necessary to qualify for traditional long-term, fixed-rate loans. Yet, they were not offered those kinds of loans, but instead “steered into exotic and costly mortgages they did not fully understand and could not afford,” the commission said.

This “deliberate targeting of minority areas for the sale of risky and expensive loans,” as the commission described it, wreaked havoc on the financial wellbeing of affected families and undermined the stability of entire neighborhoods.
African-American and Latino borrowers were almost twice as likely to have lost their homes to foreclosure as non-Hispanic whites, according to the Center for Responsible Lending (CRL).

“Communities of color got the worst of everything. They were given the highest-risk, most expensive mortgages, they received the worst servicing from their mortgage lenders, and they have suffered the most damage from the nation’s long economic slump,” said Liz Ryan Murray, policy director for National People’s Action, a Chicago-based group that has been fighting against discriminatory home lending practices since the 1970s.

The homeownership rate for African-American households peaked at 49 percent in 2004, according to Harvard’s Joint Center for Housing Studies report, “The State of the Nation’s Housing 2013.” The rate of black home ownership–with all the potential for upward mobility it offers–fell to 43.9 percent in 2012. The homeownership rate among white households declined during that time, too, but remained at 73.5 percent.

“The black-white gap [in homeownership rates] has reached historic proportions,” Harvard’s report said.
There has also been a powerfully negative ripple effect on other property owners who never had a problem making their mortgage payments but owned property near people who did. The losses in household wealth that resulted from foreclosures and abandonment of nearby properties have disproportionately hurt communities of color, according to many sources that have studied the issue.

In ethnic neighborhoods, the average decline in home prices from 2006 to 2013 was 26 percent, according to Harvard’s 2014 report. That’s roughly three times the decline experienced in white areas.

Nationwide, about 27 percent of homeowners in minority areas had negative equity compared to about 15 percent of owners in white areas.

Lower-income areas have little prospect for home prices to recover soon, or for businesses or banks to start reinvesting in hard-hit neighborhoods.

“In some communities with many foreclosed properties, the crisis threatens to doom the entire neighborhood to a cycle of disinvestment and decay,” according to Chicago’s Business and Professional People for the Public Interest.
Their report goes on, “A cluster of vacant properties can destabilize a block. A cluster of troubled blocks can destabilize a neighborhood. The costs are substantial.”

Adding to the impact of foreclosures is the ongoing economic slump and the high rate of black unemployment. As a consequence, poverty and the despair and anger that go with it, are increasing in suburbs like Ferguson.
Between 2000 and 2011, the impoverished population in suburbs grew by two-thirds—more than twice the rate of growth in cities, according to Confronting Suburban Poverty in America, a 2013 book from the Brookings Institution Press.

African-American residents of the Watts section of Los Angeles rebelled against a mayor and a police force many considered to be racist. The fires and the violence raged for six days, resulting in 34 deaths and the destruction, damage or looting of 1,000 buildings.

After more rioting in 1966 and 1967, a presidential commission on urban problems was convened and Congress enacted programs to provide affordable housing and revitalize cities. In 1968, equal access to housing regardless of race became the law of the land.

To a very large extent, most of those programs worked as intended, improving conditions for millions of Americans, many of them ethnic families.

Unfortunately, the United States government’s commitment to housing and cities has waned in recent years. The decline in funding and elimination of certain key programs could not have come at a worse time. Meanwhile, there has been a powerful backlash among mostly white communities against federal legal initiatives to enforce the fair housing and fair lending laws.

The U.S. Congress has been fixated on budget cuts, and with a contentious election coming up, much of the progress made since the 1960s is in jeopardy. President Barack Obama’s 2015 proposed housing budget would restore some of the cuts in funding for housing programs made in recent years. However, even if Congress accepted his plan, it would not restore all the cuts or provide resources sufficient to address the nation’s housing and urban problems.

After the riots in 1965, 1966 and 1967, the National Advisory Commission on Civil Disorders (known as the Kerner Commission) issued a report saying, “Our nation is moving toward two societies, one black, one white—separate and unequal. Segregation and poverty have created in the racial ghetto a destructive environment totally unknown to most white Americans.”

Today, ethnic communities are suffering setbacks again. Even as our population is becoming more diverse, our communities are becoming more segregated and income inequality is increasing.
“Arrested progress in the fight against poverty and residential segregation has helped concentrate many African Americans in some of the least desirable housing in some of the lowest-resourced communities in America,” according to a 2013 report from the Economic Policy Institute (EPI).

If the recent trends continue, the unrest in Missouri may not be an isolated reaction to a tragic shooting, but a harbinger of things to come.

Andre Shashaty is president of the nonprofit Partnership for Sustainable Communities and author of the forthcoming book, Rebuilding a Dream: America’s New Urban Crisis, the Housing Cost Explosion, and How We Can Reinvent the American Dream for All.”