Commentary: Why Would a Police Chief Incite Violence in His Own Streets? 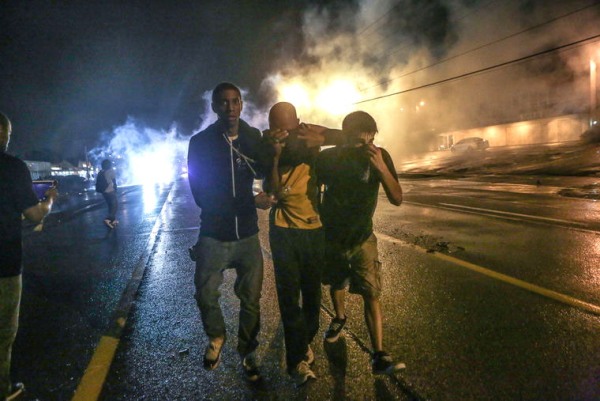 By Chris King Of The St. Louis American Special to The Skanner News
Published: 18 August 2014

On Friday, Ferguson Police Chief Tom Jackson – who has no command authority over protest events ongoing in his city – released a videotape that he claimed showed Michael Brown strong-arming a shopkeeper and shoplifting a box of cigars.

Captain Ron Johnson of the Missouri Highway Patrol – who does command police authority over protest events ongoing in Ferguson, Missouri, as of Thursday afternoon – was not informed in advance that Chief Jackson would release this video, he later told media. CNN reported on Saturday that U.S. Department of Justice officials warned Chief Jackson against releasing it. He ignored them.

The video immediately inflamed the local residents who had started a protest movement that is spreading throughout the region and nation. The reason for their anger has been widely expressed in social and other media.

Brown was shot repeatedly and killed by a Ferguson police officer, whose name (Darren Wilson) also was released on Friday. Police claim that Brown initiated a struggle by attempting to grab Officer Wilson’s service revolver. A number of eyewitnesses claim that when Brown was killed he was standing unarmed, hands up, in the middle of the street in broad daylight.

Jackson released the shoplifting video along with the name of the officer who killed Brown. Officer Wilson has not been charged with murder, and reporters who found his home in Crestwood, Missouri, once his name was released, found evidence of a hasty and abrupt departure.

Reporters asked Chief Jackson how the shoplifting video was connected to the shooting of Brown, and he admitted it was not connected. Brown was not being questioned about shoplifting when Officer Wilson told him to get out of the street on Canfield Drive. Chief Jackson said Brown was stopped because he was walking in the middle of the small, local street and told to move to the sidewalk.

That is what inflamed local residents, as the Department of Justice warned Chief Jackson it would. Presenting the shoplifting video follows a long-established pattern of tarnishing the image of a victim of police violence – or of vigilante violence, in the case of Trayvon Martin. It is blaming the victim after his death. As Virvus Jones said on Twitter, the penalty for stealing cigars is not public execution.

The shoplifting video has no connection to Brown’s police interaction that resulted in his death. An attorney seeking to discredit Brown to a jury might introduce it as evidence, but there is no reason for a public official responsible for public safety to release the video alongside the name of the police officer who fatally shot Brown.

CNN reported that Department of Justice officials warned Chief Jackson that a release of this video unrelated to Brown’s shooting would be dangerous.

Captain Johnson, who is in command of police response to the Ferguson protests, said he was not warned in advance that Chief Jackson was releasing the shoplifting video on Friday morning – after the first tentative night of peace on the streets.

Chief Jackson was at best disastrously negligent in releasing an incendiary video against the advice of federal authorities and without warning the police commander with authority on the ground. At worst, Chief Jackson is guilty of incitement to riot.

Why would a police chief incite violence on his own streets?

Chief Jackson was first released of command authority and replaced by St. Louis County Police Chief Jon Belmar. Belmar was responsible for the militarized SWAT-team response that made Ferguson look like the Gaza Strip. It was Belmar and his militarized tactics that were rejected by Gov. Jay Nixon when he replaced Chief Belmar in command with Captain Johnson.

Captain Johnson – a black man from Ferguson – replaced the military model with a community policing model. That resulted in the peace on the streets that was celebrated across the region, state and world on Thursday night. That peace was challenged and disrupted by Chief Jackson’s release of the incendiary video on Friday morning.

Chief Jackson is a local police authority pushed aside by federal and state officials and he is fighting back – against the public safety of his own city and ultimately all of us. He and the old guard of police leadership stand to lose a lot if a community policing model, put in a place by a more diverse police leadership, succeeds.

On Friday night, an exhausted community leadership – that included Antonio French, Brother Anthony Shahid and Tef Poe – succeeded in largely defusing a tense situation. There was violence and looting, but there could have been worse. Police leadership on the ground agreed it would have been much worse had they escalated to full military response. On Friday night, Captain Johnson moved away from community policing to riot-response mode, but he did not completely militarize the conflict. He allowed community leaders who have the trust of the angriest protestors to work with their people.

Ferguson Police Chief Tom Jackson must be removed from public office before he can do any more damage. But Ferguson Mayor James Knowles III has stood behind his chief and surely must have known what his chief was doing and why he was doing it. The intention to destabilize the fragile peace put in place by Captain John is larger than Chief Jackson and Ferguson.

State Senator Jamilah Nasheed told CNN that Chief Jackson must step down after inciting the violence of Friday night. Nasheed also connected Chief Jackson to St. Louis County prosecutor Bob McCulloch, who said Nixon replacing Chief Belmar in command was a “disgrace.” Amazingly, McCulloch said this even when the world was celebrating a night of peace on the streets in Ferguson.

The prosecutor responsible for prosecuting the man who shot Michael Brown dead appears to be complicit in attempt to undermine community policing in Ferguson. McCulloch should be removed from the case, as Nasheed and County Executive Charlie Dooley have requested, and replaced with a special prosecutor.

For now, it is clear that the most destabilizing elements in Ferguson and St. Louis County are the public officials responsible for public safety.

See more reporting and photos from the St Louis American