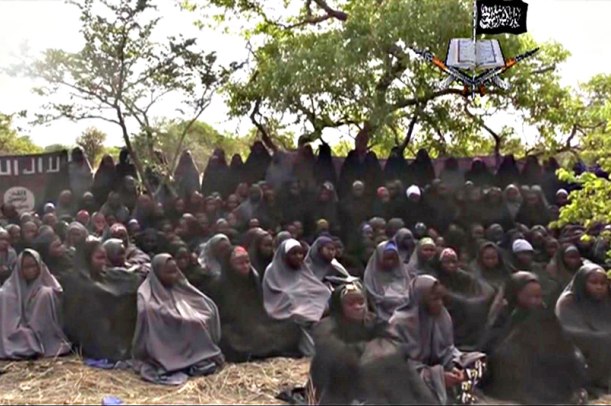 In this photo taken from video by Nigeria's Boko Haram terrorist network, Monday May 12, 2014 shows the alleged missing girls abducted from the northeastern town of Chibok. The new video purports to show dozens of abducted schoolgirls, covered in jihab and praying in Arabic. It is the first public sight of the girls since more than 300 were kidnapped from a northeastern school the night of April 14 exactly four weeks ago. (AP Photo)

Long after completing his 8-year presidency, William Jefferson Clinton acknowledged that he should have intervened in the conflict in Rwanda. Hundreds of thousands perished from the genocide that shaped the country. In his zeal for international peace President Clinton intervened in Ireland, the Middle East and Bosnia. He acknowledged that had the United States intervened in Rwanda, at least 300,000 deaths may have been prevented.

Some have shrugged that this is a “cultural” or internal matter that Nigerians must settle among themselves. The United States and the United Nations are nodding on Nigeria if they choose to do little more than offer lip service in this crisis situation. It has been documented in Bosnia and Rwanda that rape was an instrument of war. What about Nigeria?

Dozens gathered outside the White House and outside the Nigerian Embassy to plead that the powers that be “bring back our girls.” First Lady Michelle Obama has also carried a sign to that effect. Nearly a month after the girls were seized the international community has begun to pay attention to this vile kidnapping. Again, this capture may well be the tip of the iceberg. Who knows how many girls have been captured from their homes or their schools.

Women have too often been tools in genocide, yet too often this form of genocide has been ignored. The United Nations spews pithy pronouncements and declares one year or another the year of human rights. But as former Secretary of State Hilary Clinton has often declared, “women’s rights are human rights.”

Now, every woman in the United States Senate has called for relief for kidnapped girls in Nigeria, President Barack Obama, referencing his own daughters, has offered relief. There have been “high level” meetings to talk about the ways that U.S. can intervene in this repugnant situation.

Our intervention is spot on, but why did it take so long? Were these Bosnian women would there have been so much “deliberation?” As grateful as I am for U. S. intervention, the pace of it saddens me. Were we nodding on Nigeria?

The status of women and girls should be a global concern. Nigeria is one of the countries that visibly impose inequality. We have intervened in human rights that have no gender component all over the world, but have been notably silent when the African continent is involved. We say that these are “internal matters” that countries must settle on their own, but when human rights activists are massacred in China, we manage to get involved.

To again quote Hilary Clinton, “women’s rights are human rights.” To suggest that women deserve any less is to deny our humanity all over the world. We cannot fight for social and economic justice by taking weapons from half of the army. The women who have experienced direct subjugation are often, also, the most passionate spokespeople.

Our country has been a champion of human rights all over the world, and when we nod on Nigeria we are suggesting that women’s rights do not matter. We know about 300 Nigerian girls today. How many will we learn about tomorrow? How many in another country. How many will be swallowed in world patriarchy because we refuse to act?

Julianne Malveaux is a Washington, D.C.-based economist and writer. She is President Emerita of Bennett College for Women in Greensboro, N.C.