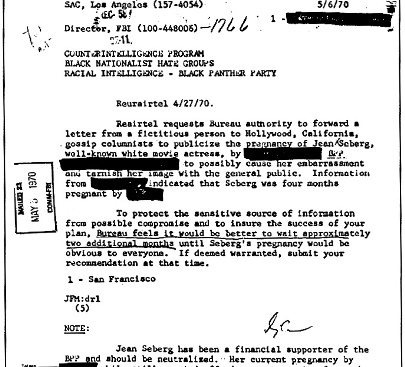 Charlene Muhammad Special to the NNPA from The Final Call
Published: 17 April 2014

PHOTO: An FBI document asking for authorization to expose actress Jean Seberg's pregnancy because of her support for the Black Panther Party. The name of the alleged father is redacted in black.

Human rights activists are calling on the government to grant amnesty and unconditional freedom to all political prisoners incarcerated because of COINTELPRO, a secret – and sometimes illegal - FBI program created to discredit Black, Native American and politically dissident organizations during the 1960s and 1970s.

Advocates say that men and women who sacrificed their lives so others could enjoy civil liberties and human rights in America, are now aging and suffering failing health as they languish in prison, some for 40 years, and many in solitary confinement cells.

The National Jericho Movement, which advocates for political prisoners inside the United States, wants emergency congressional hearings on the impact and continuing legacy of America's domestic war against soldiers in the Black Liberation Struggle. It also wants political prisoners released and some activists want the freedom fighters compensated for their unjust suffering.

"The effort to try to expose the horrible impact of the FBI's CounterIntelligence Program has been an ongoing thing," said Jihad Abdulmumit, chair of the National Jericho Movement. That exposure undergirds Jericho's push for the congressional hearings. Although Mr. Hoover announced in 1971 that COINTELPRO had ended after the anonymous Citizens' Commission to Investigate the FBI exposed the program, secret government operations, set-ups, stool pigeon operations and political assassinations continue today, activists warned.

"COINTELPRO by any other name is still COINTELPRO. ... Homeland Security as an institution of the United States security now, the Patriot Act, the Anti-Terrorism Effective Death Penalty Act I and II—all of this now has really led up to still what we have today as a CounterIntelligence Program and the War on Terrorism," Abdulmumit told The Final Call.
The online petition, "Jericho: Congressional Hearing on Cointelpro's Legacy and Continuing Impact," is part of Jericho's attempts to educate people and have the U.S. government revisit COINTELPRO's continuing legacy.
In the future, the group plans to deliver the petitions to Congressional Black Caucus members and the record of a 2011 Peoples' Tribunal Hearings on COINTELPRO. Organizers hope the campaign will inspire Black Caucus members to speak up for political prisoners. They also hope to send 100,000 signatures to the Obama administration before he leaves office.
We Want Freedom

Some political prisoners targeted by COINTELPRO are more well-known than others, partly because of efforts like the FBI's million-dollar bounty against Assata Shakur, who is exiled in Cuba. Ms. Shakur, a Black Liberation Army member, has been living in exile since 1984 after she escaped from prison in 1979. Ms. Shakur, formerly known as Joanne Chesimard was convicted of murdering a New Jersey State Trooper in 1977, but she has maintained her innocence. Her supporters have denounced the FBI's $2 million bounty and listing her as an armed and dangerous terrorist.
The late Geronimo "ji-Jaga" Pratt, a Vietnam War veteran and high-ranking leader of the Black Panther Party, served 27 years in prison and after a long-fought legal battle forced his release in 1997. His wrongful conviction for murdering a White couple was shown to be a set-up tied to a government informant.
There's Jalil Muntaqim, co-founder of the Jericho Amnesty Movement, a former Black Panther Party and Black Liberation Army member. He was convicted of killing two police officers in New York and has spent 42 years in prison. Supporters are pushing an online petition to Tina Stanford, chairwoman of the New York Board of Parole, seeking his parole this year.
There's Imam Jamil Abdullah Al-Amin whom supporters argue was wrongfully convicted in the 2000 shooting of two Fulton County deputies, one died, in Atlanta. He is serving life in a federal Super-Max underground prison in Colorado.
The incarceration of Imam Al-Amin, former Black Panther leader H. Rap Brown, represents COINTELPRO finally "getting their man" in a case where someone confessed to the crime, but the FBI will not acknowledge the confession, Abdulmumit said.

Nearly six months after his 70th birthday, Russell Maroon Shoatz was recently released from solitary confinement under court order and after the involvement of United Nations Rapporteur Juan Mendez on Torture and Other Cruel, Inhuman, and Degrading Treatment and Punishment. His release ended more than 22 consecutive years in isolation. The former Black Panther Party and Black Liberation Army member was convicted of murdering a cop in Pennsylvania and sentenced to life imprisonment.

On Dec. 7, 2011, prosecutors announced they were dropping their quest for the death penalty for Mumia Abu-Jamal, a journalist and former Black Panther, convicted in 1981 on charges of killing a police officer in Philadelphia. Abu-Jamal was removed from death row after his case was taken to the Supreme Court on appeal. He's now jailed for life without the possibility of parole, but his supporters remain vigilant in their fight for his release and exoneration.

Marshall Eddie Conway, another former Black Panther Party member, was recently released due to a faulty jury instruction after serving 44 years in prison in solitary confinement. "An error in the jury instructions is a far step away from saying that Eddie Conway is a freedom fighter, which he is in our book, and he should be released on that alone," Abdulmumit said.

Herman Wallace, diagnosed with terminal liver cancer, died at age 71, less than a week after being released from prison. He was one of the Angola 3 convicted of stabbing a prison guard. He served more than four tortuous decades in solitary confinement in a Louisiana prison, but maintained his innocence until his death. Mr. Wallace and Albert Woodfox said they were targeted for helping to set up a prison chapter of the Black Panther Party at Angola State Prison in 1971. International supporters of the Angola 3 are still fighting for Woodfox's release.

Activist Efia Nwangaza, director of the Malcolm X Center for Self-Determination in Greenville, S.C., feels America must not only remedy wrongs against political prisoners, but also compensate victims and survivors of government plots and targeting.

Jericho's list includes hundreds and many are Muslims, according to Abdulmumit. It also includes Native American freedom fighter Leonard Peltier, Oscar Lopez Rivera and other Puerto Rican nationalists, as well as some White anti-imperialists, he said.

"It's important that we keep that challenge before the U.S. government kind of the way that the Jewish community keeps before the public the wrongs that it suffered at the hands of the Germans and its holocaust. We must be as vigilant in reminding our oppressors of the wrongs of our holocaust or Maafa as we call it."
Nwangaza says most Blacks aren't aware of COINTELPRO or the existence of political prisoners. Many are blinded by a harsh, daily economic, social and political struggle to survive, others embrace willful ignorance, she says.

"It's sort of like the question of reparations," she said. "As we get generations away from the actual violation of the holocaust of enslavement, the less we know about it and therefore the less we are outraged by it and the less we feel entitled to compensation for it."
Most aging political prisoners are enduring excessive sentences, disproportionately held in solitary confinement, suffering from severe illnesses and prisons are not responding to their needs, activists added.

There must also be an investigation into deaths that occurred during the COINTELPRO-civil rights-Black Power era, activists said.

"Who killed Bobby Hutton? And whatever was done about that?" asked Nwangaza. Bobby Hutton was a teenage member of Panther Party killed in California. Likewise the 1969 killings of Chicago Black Panthers Fred Hampton and Mark Clark and the relationship to the larger national campaign of the U.S. government must never be forgotten, she said. The dynamic leader Hampton and comrade Clark died in a hail of bullets fired into their West Side apartment. The Panthers were asleep, drugged by a sedative put in their drinks by an informant, activists have long charged.

"While authorities claimed the Panthers had opened fire on the police who were there to serve a search warrant for weapons, evidence later emerged that told a very different story: that the FBI, the Cook County state's attorney's office and the Chicago police conspired to assassinate Fred Hampton," said Juan Gonzalez in a broadcast of the news program Democracy Now in 2009. The program marked the 40th anniversary of Black Panther Fred Hampton's death.