Blackonomics: Democrats and Republicans Romancing the Vote, but Not the Dollar 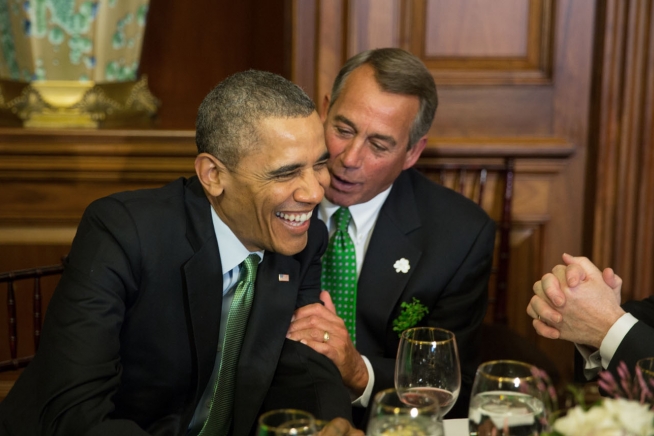 James Clingman NNPA Columnist
Published: 17 March 2014
President Barack Obama shares a laugh with House Speaker John Boehner, R-Ohio, during a St. Patrick’s Day lunch for Prime Minister Enda Kenny of Ireland at the U.S. Capitol in Washington, D.C., March 14, 2014. (Official White House Photo by Pete Souza)
It’s so silly for Black people to fight over the Dems and Repubs when it is counterproductive for us to be enslaved by either party.  Between the late 1800s and the early 1900s we voted nearly 100 percent Republican.  Now we vote nearly 100 percent Democrat.  What has that gotten us besides being ignored and taken for granted?  Do we have real political power?

We have been instructed and admonished to be independent and only give our votes to individuals who act in our best interests, but we have failed miserably in response to that advice by doing the exact opposite.  It makes no sense to give virtually all of our support to one political party and receive patronizing crumbs in return.

To a large extent, our problem is centered on our romance with the vote itself. We hold our ability to cast a ballot in such high esteem, sadly, as though that alone will solve our problems.  Not so. Voting is simply the first step, not the final step. Without power behind our precious votes, we are a paper tiger, helpless to effect positive change for ourselves in the political arena.  The key word in the last sentence is ourselves, because we have certainly helped make things better for other groups.

So, with our political predicament in mind, here are my thoughts:  If we are unwilling to vote as independent critical thinkers, we should stay out of the voting booth.  If we are not inclined, on a local and national level, to collectively leverage our voting power, then all we will ever have is the power to vote. If all we are going to do is vote, there is no need to vote at all.

Now before some of you get your jaws tight, just think about all the energy Black folks have put into voting. Think of all the sacrifices we have made, all the mistreatment we have suffered and even this month, as we remember “Bloody Sunday,” how we are still fighting to keep our precious vote. Compare all of that to what we have gained by merely casting our votes and then going back to sleep. We have treated elections like popularity contests and euphoric exercises that only give someone a “job” for as long as they want it, whether they produce or not. We have misused and abused our precious vote by being uninformed on issues and candidates alike, and by being unwilling to do anything except vote for whatever or whomever the party tells us to.   That’s sheer nonsense. If our vote is so sacrosanct, why do we mistreat it?

As much as we say we need “power,” both political and economic, our actions belie our words.   Claud Anderson, in his book, Black Labor White Wealth, wrote, “…groups aspiring to gain political power can only obtain and use it if they have economic power as well…Voting rights have pacified Blacks by allowing them to make choices but never decisions.”

If voting alone gave us power, we would not have heard “You lie!” during the State of the Union Address; if it gave us power, Darrell Issa would not have dissed one of our most respected and respectable congressmen, Elijah Cummings; and Paul Ryan would not have uttered his ridiculous comments about “inner city” men. Voting is part of the process that, if supported by economic power, leads to real political power.

The late Amos N. Wilson, an author and assistant professor of psychology at City University of New York, wrote, “The idea that [Blacks] can exercise effective power, political or otherwise, without simultaneously exercising economic power is a fantasy…In the absence of access to and influence on relevant government centers of power, the absence of an ‘independent’ political party, and the absence of an influential, wealthy, nationalistic upper or leading class [Blacks] are unable to effectively secure [our] special interests.”

For example, Wilson also said, “We have a leadership that talks about income equality. A man can have $1 million of land and get an income of $10,000, and another get an income $10,000 working for someone else.  Even though they have equal incomes, they are not equally wealthy.”

Politics leads to incomes; economics leads to wealth.  That’s why back in 1998 I coined the term, “Blackonomics” rather than “Blackolitics.”

Brother Tarikh Tehuti Bandele wrote in 2006, “Indeed, Black people should register to vote, but not to become lackeys for [any] Party…voting, by itself, should never be looked upon as the ultimate solution. Voting is but a tactic, a strategy, or a means to an end…far too many are promoting the idea that all Black people need to do is vote, and heaven is just around the corner.”

We want “voting power” but we settle for the “power to vote.”  We fight for the “right to vote” but we fail to “vote right.”  Voting is a means to gain political power, not an end that simply allows one to participate in the act.  If we fail to follow that truism, we may as well not vote.

Jim Clingman is founder of the Greater Cincinnati African American Chamber of Commerce.