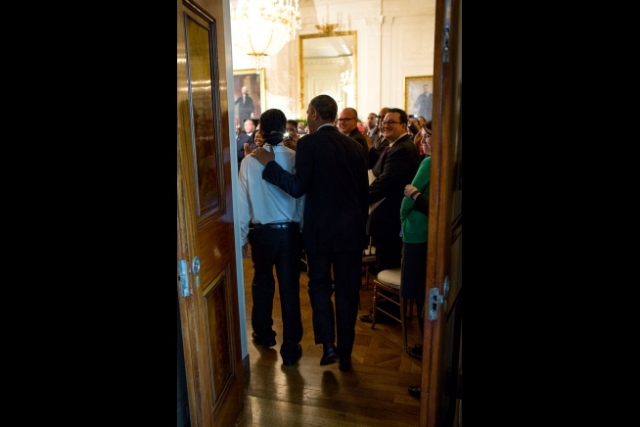 Too often during the presidency of Barack Obama, the nation’s first African-American president has felt the need to chide Black Americans to take responsibility for their destiny. In announcing his new “My Brother’s Keeper” initiative targeting young men of color at the White House, the president again waded in the personal responsibility waters and told the nation our Black and Latino young men simply have to do better, be better. After all, President Obama shared how he was the product of a single parent, did not have a relationship with his father and was sometimes angry about that, got high and made some bad choices. But look at him now, all grown up and occupying the White House.

It’s not like we have not heard this pitch before. Most Black children receive this message whether the product of a two- or single-parent household, or from a family surrogate. If you have spent any time in a Black church, chances are you have heard that sermon on multiple occasions. And contrary to popular belief, Black people actually confront irresponsible behavior on a frequency that would shock White America. What’s different here is that the message is coming from our highest and most powerful elected official, and someone whose reflection in the mirror looks like us.

My level of disgust for this message delivered by the president is similar to the anger I feel when I hear the generalized “you people” when a White person seeks to demonize Black people. When President Obama uses such rhetoric it reinforces the perception among many Whites that if only Black people would get their act together they could make something of themselves. It reminds me of the movies I despised when I was a child; the films with the depiction of the mumbling and self-deprecating Black house servant who put down Blacks to curry favor with the White boss but was too ignorant to understand he was insulting himself. The crowd the president plays to with this message is predisposed to discount the value of Black people, including the one in the Oval Office.

I can’t recall a White president delivering that message to White men. George Washington, Thomas Jefferson and the wigged crew from 1776 certainly looked the other way when they and their White brethren were buying and selling Africans like cattle. My father served in World War II but I don’t remember reading that President Truman publicly rebuked White male military leaders for allowing Black soldiers to bleed for their country but be treated as second-class citizens.

Perhaps I missed the kinescope of President Dwight D. Eisenhower chastising White men for spitting on and cursing at little Black children who simply wanted to go to school. I do not have a memory of President John F. Kennedy telling White, southern men who bombed churches and murdered Black children to be responsible. Nor for that matter did JFK dress down southern governors like George Wallace for being blatantly racist and trampling on the Constitution.

Who holds White, male CEOs responsible when they mismanage billion-dollar corporations, causing thousands of workers to lose their jobs but walk away with million dollar golden parachutes as a ‘reward” for their incompetence? And who holds corporations, run by predominantly White, male directors, responsible when they hire these failures to run their enterprises, running the risk of creating more collateral damage in the form of displaced workers and devastated families? It is near impossible to get a predominantly White jury to convict a police officer who is a White male and has killed a Black male with excessive force. And I’ve never heard a president tell White college students that riot after a sporting event that they should be more responsible and stop causing property damage and injuring police.

It seems that responsibility is a one-way street on which only Black people are expected to travel.

Yet, Black people have been responsible to the point that America needs to send us a “thank you” card. The fact that there has not been more violence in this country over our treatment has always amazed me and is a testament to our divine connection. After experiencing the brutality of slavery, the betrayal of Reconstruction, the terror of Jim Crow and the dehumanization of economic oppression, the real message should be one of gratitude and respect.

Why did millions of Blacks have to leave their birth homes in the south and migrate north? How were so many Blacks murdered and how did so many White juries let the killers go free? How did drug laws come into existence that were racist at face value and used for the mass incarceration of Blacks and disproportionately Black men? Why did we need a Civil Rights Act and Voting Rights Act if the Constitution is the law of the land and the 13th, 14th and 15th amendments supposedly guaranteed us citizenship and equal protection? And, who is irresponsible Mr. President?

I do not need to hear the president’s personal story of redemption. Too many of us could one-up him when it comes to the burdens we have carried as Black men. What the nation should hear is the truth and the acknowledgement that the reason the president’s new initiative is needed is because young men of color are the latest in a line of Black casualties.

Walter Fields is the Executive Editor of NorthStarNews.com.