In Defense of Dennis Rodman 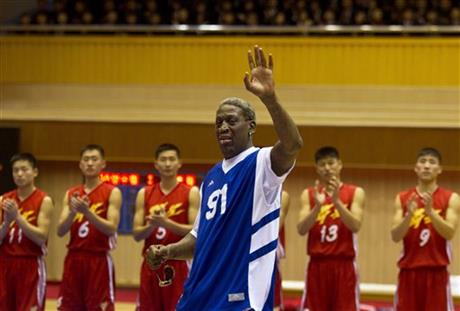 The verdict is in: All civilized people must hate Dennis Rodman. Politicians from John McCain to John Kerry and pundits from Bill O’Reilly to Chris Matthews are outraged that an American would visit the third member of the Axis of Evil. Earlier this week Rodman, along with six fellow former NBA players, arrived in Pyongyang, playing an exhibition basketball game against a team of North Koreans. The game took place as part of Kim Jong Un’s birthday celebration.

The politicians and pundits are aghast, and most Americans are not far behind them in their hysteria. The atmosphere evokes George Orwell’s “Two Minutes Hate.” Any deviation from McCain’s or Clinton’s hardline hatred of our mortal enemy borders on treason. The nightly headlines detail Rodman’s idiocy.

Is Rodman’s trip really that bad? I don’t think so. I think it’s an extremely positive step in the right direction if one is truly concerned with the freedom of North Koreans. Can anyone name a single thing that the State Department has done to normalize relations between our two feuding governments? Have Hillary Clinton, John Kerry or any other so-called diplomats spoken with their North Korean counterparts, let alone traveled there to show solidarity with North Korean citizens?

So what if the North Korean government is “unreasonable” or “insane?” A state diplomat’s sole job is to forge peaceful and harmonious relationships with other state actors, no matter how difficult.

How any government official could call herself a diplomat when her first instinct in statecraft is to issue harsh condemnations, threats and ignite cold wars is beyond me. Diplomats are supposed to be peacemakers, not antagonists. If I didn’t know better, I’d think the State Department and co. are more interested in maintaining preselected foreign enemies than they are in peacemaking. But the State Department’s propensity for feuding is part of a larger problem — government’s utter inability to give foreigners their freedom. Governments have only one arrow in their quiver: Force. When there is a problem, foreign or domestic, force is the government’s only answer.

For what tools does a state actually have in foreign policy? Sanctions. Threats of war. Actual war. Foreign aid. That’s it. All involve violence, real or threatened, and in the case of foreign aid, theft and grotesque cronyism.

Of course, a Secretary of State could travel to a foreign country just as Rodman has done, but what good would such a visit do? At the end of the day, a politician’s visit would be nothing more than one master telling another master how to to treat his subjects.

North Koreans, and all other unfree persons, need fewer masters and more experience — the experience that comes from seeing other cultures and from learning that there is an entire world outside their own small country. No, Rodman and six old NBA players may not be the major dose of culture that’s going to set the North Koreans free. But they’re a start at opening up North Korea to outsiders who bring with them a diversity of appearance, lifestyle and opinion — all things celebrated here in the United States.

I’m encouraged by the Rodman crew’s trip, and applaud their effort. Had I not seen it happen, I probably would’ve been led to believe that North Korea had a strict No Americans Allowed policy. I don’t pretend to have the answer on how to free North Koreans from their government chains, but it doesn’t take great imagination to envision annual American basketball games blossoming into something larger. People are creative and doors get opened where least expected.

And no, I don’t love seeing someone of Rodman’s stature seemingly palling around with someone as nasty as Kim Jong Un and singing him happy birthday. I don’t like seeing any government official bowed to, praised or celebrated, North Korean or otherwise. But think about it. If you had the prominence of Rodman and desired to take the first step in opening up a walled-off country, would you make any progress by dissing the country’s ironfisted leader, whose invitation you depend on? Not a chance.

Perhaps Rodman’s admiration for Kim is genuine, but his motivation shouldn’t matter. His warm behavior towards Kim has allowed Rodman an opportunity that no United States government official has been able to achieve. At times, one wonders whether the United States government is merely angry with Rodman for striking a blow against its monopoly on diplomacy.

Only shifts in culture and attitudes bring about freedom and progress. Governments are reactive, and more Rodman outings in North Korea means more knowledge for North Koreans, and a resulting hunger for information about the world beyond their state borders. Who knows when North Koreans’ cultural curiosity will turn into a demand to freely interact with the world.

Chad E. Nelson is an attorney based out of Providence, Rhode Island and a committed market anarchist/peace activist.