Why Republicans Should Embrace a New Immigration Law

By Carrie Crawford, Special to The Skanner News
Published: 24 October 2013 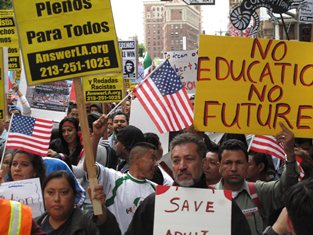 There is a majority consensus that immigration reform is dead - that its moment in history has past. I am one of a few now encouraged to believe that the passing of comprehensive immigration law would be the best gift that the Republican Party could give to itself. Given the debacle they have just gone through, it is the only viable option left to lift them out of their self-imposed purgatory.

Senate Bill 744, the Border Security, Economic Opportunity and Immigration Modernization Act addresses three broad areas to cure America's grave immigration malaise: border security, revised provisions to allow for family and employment based immigration and an overhauled administrative apparatus which provides for a mandatory employer verification system, new worker protections, revised court and detention procedures with stiffer criminal penalties for certain immigration-related actions. A hallmark of the bill is the astronomical $46.3 billion tab for some 700 miles in new border fencing required by the bill along with the deployment of some 38,405 border patrol agents. This one element alone is a strong argument for Republican support since border security has been the mainstay refrain in the past for opposing such legislation.

And even more recently with the continuing Republican obsession with the "budget" and America's debt, the argument grows even stronger for the passage now of a new immigration law. Economists (independent of the government) throughout the country have documented the huge economic benefits that can be expected from the new law based on an analysis of what occurred after passage of the l986 Immigration Reform and Control Act.
University economists Sherrie Kossoudji and Deborah Cobb-Clark found that "IRCA provided immediate direct benefits by successfully turning formerly clandestine workers into higher-paid employees."
A report from the American Action Forum, authored by former Congressional Budget Office (CBO) director Douglas Holtz- Eakin, estimates that immigration reform would "raise GDP per capita by over $1,500 and reduce the cumulative federal deficit by over $2.5 trillion" over 10 years. Study after study shows that turning so-called "illegal" immigrants into legal immigrants acts as an economic stimulus simply because these workers earn more income from authorized employment which in turn generates more tax revenue for all levels of government expanding consumer buying power which strengthens business all over the country.

The CBO recently reported that enacting the Senate immigration bill would increase real GDP by 3.3 percent in 2023 and 5.4 percent in 2033 - an increase of roughly $700 billion in 2023 and $1.4 trillion in 2033. States like California, Texas and Florida within three years of a new law, would see added revenues to the tune of $10.53 billion with over 923,000 new jobs. According to Regional Economic Models, Inc., reforms like Senate Bill 722 would boost economic output in Oregon by some $389 million creating 4,552 jobs and in Washington State by $948 million with 9,986 new jobs in 2014. South Carolina, North Carolina, Virginia and even little Rhode Island, all benefit greatly in business innovation, technology, housing growth, agriculture and tourism stemming from what is described as "commonsense" immigration reform.

So the economic verdict is in - and with increased surveillance on a massive  scale at all of our southern borders, border enforcement should be 90 percent assured. A Republican majority can then grace comprehensive immigration reform with newfound support because it's in their best interests and anchored in their perennial platform demands: growing the private sector and reducing the deficit. More importantly, it is their best strategy to rise from the ashes of their latest fiasco.

Carrie Crawford is an attorney who practices immigration law. Contact her at [email protected]