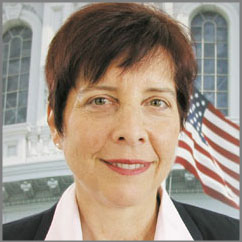 The migration of women from the workforce into business ownership is one of the great economic realizations of the American Dream. The U.S. Women's Chamber of Commerce has grown to more than 500,000 members. Most of our members are small business owners. And we aren't opposing an increase in the minimum wage – we're supporting it.

The number one problem I hear from my members is that the recovery is slow because sales are still weak. Let's not forget that workers are customers too. Raising the minimum wage would put more money in the pockets of low-paid workers who will turn right around and spend it at our local businesses buying necessities they can't afford now. When the minimum wage goes up so do sales at the grocery store, the pharmacy, the repair shops and other local businesses.

Consumer spending drives 70 percent of our economy, and we must repower consumer spending – backed by adequate wages rather than unaffordable debt – if we are going to repower our economy, create jobs and reverse the decline in our middle class. Raising the minimum wage boosts the economy from the bottom up, which is exactly what we need.

Many of my members were once employees themselves. They know that the typical low-wage worker is an adult woman. Think of your waitress or cashiers at chain stores. Think of the childcare worker who takes care of your son or daughter, or the health aide who helps your mother or grandfather. Our members know that raising the minimum wage helps women workers and business owners succeed.

Women business owners, who now own 30 percent of businesses nationwide, know that women are disproportionately affected by a low minimum wage. More than 17 million women would benefit from the proposed minimum wage increase to $10.10. It will make a crucial difference for hard working women and families in their struggle to make ends meet.

There are two roads to profitability: the high road and the low road. Businesses can invest in their workforces with decent wages and benefits, and enjoy the benefits of a dedicated workforce with lower turnover, higher productivity and better customer service. Or businesses can pay poverty wages and churn through employees. These businesses may save on immediate payroll but will experience the significant expense of higher turnover, constant recruitment and retraining, higher absenteeism and a less experienced, less productive workforce.

Our members have chosen the high road strategy for building their businesses: they pay better wages and their businesses benefit as a result. They know that this approach attracts more stable, dependable and productive employees. That's not surprising since better wages enable workers to concentrate on their job without worrying about how they will put gas in their cars, pay for child care or keep up with their rent.

In our experience, workers who get paid poverty wages work overwhelmingly for the big chains, not for Main Street businesses. In fact, low-paying big chains count on responsible employers and taxpayers to subsidize them by providing food stamps and other government assistance to their workers who can't make ends meet on poverty wages. Raising the minimum wage would assure taxpayers that businesses are playing fair and compensating workers at responsible levels.

Raising the minimum wage will help small businesses by putting more money in the pockets of our nation's workers, which will boost spending and job creation on Main Street. And it will bring fairer pay to women, who hold the majority of the low-wage jobs that will see a raise.

Margot Dorfman is CEO of the U.S. Women's Chamber of Commerce.