Boys Are Not Miniature Men: Our Part in Mohamed Mohamud's Prosecution 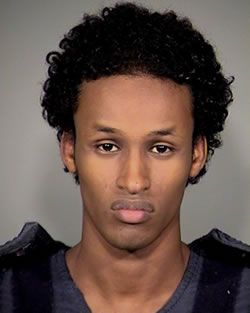 Mohamed Osman Mohamud was 17 when it all started. A kid like our sons and our nephews. A teen just like I used to be.

"Mo-Mo" or "Mo2" they called him at Westview High – and what a relief that nickname must've been for him, like the enormous lift I got when my school buds began calling me "Cat," instead of all those awful mispronunciations kids with names exceeding two syllables have to answer to, no matter how ancient or elegant our elders and ancestors' expectations are of the names they've given us.  What a relief it was.  Cat.  Cool at last.

At 17, I was done with school.  I'd skipped required health and PE.  I didn't have nearly enough math to graduate.  I was ready to walk, when Coach Jimenez stopped me. I looked up to that big brown man. He said our team needed my undefeated record.  He said he needed me, that muscular man did.  So for him I stayed.

I didn't graduate though, no need to.  I made two international wrestling teams and got a Duck U athletic scholarship.

Our boy Mohamed was 19 when undercover agents of the government of the United States began mentoring him.  And supplying him.  Praising God with him, praying like devout adults.  Today he's 20 and facing prison for life, for his part in an FBI plot to park a fake truck-bomb at Portland's 2011 Christmas Tree-lighting.

At 20, I made up my mind to quit the University of Oregon's wrestling team. Not because adult men were mistreating me – not at all.  Coaching was top-drawer. Training table was Mr. Steak. Flights and hotel beds were heaven.

At 20, my hours invested in athletics were no longer penciling-out.  And of course, it was the turmoil of those thrilling 1970s. Campus was in revolt – Blacks and Indians, Chicanos and Asians, Women and Gays. All of us awash in rock and riot, sex and drugs. All of it immoral or illegal or both. But according to those we looked up to, those hip radicals rationalizing it as "liberating the oppressed masses" from "hegemonic Western imperialism" – our "direct actions" were necessary.  We were the "inevitable agents of change."  The Awakened.

An elderly poli sci professor pulled me out of those times. He said I had the mind for grad school and the moves to do his overseas work.  I gave Dr. Davies what he saw in me.  I worked in Egypt and Sudan, in Kenya then Iran, in India and in the Thai Kingdom. By this gentleman's hand, I made meaning of the traumatic dislocations that had shaped all four of our exhausted father's unsettled sons. Professor Davies made me right.

I did my masters and married and doctored in law.  While Steven, my best Indian bud of the intoxicating times we shared did 22 years. Hard time at OSP.

All our boys are like this.  They live up to what cooler guys say. They lack the neocortical networks central to mastering complex emotional and social environments – it's why we call them kids.  It's how they are until about 30.  Boys are not miniature men.

It's simple.  Coaches and teachers know it.  Recruiters for Pac 10 universities and for the US Marines, work it.  Men grooming boys for Somalia's Al-Shabaab depend on it, and those FBI operatives handling Mo-Mo exploited it – when they could've just handed him over to one of the good guys who out-grew being a bad boy, working at Multnomah County juvenile corrections.

We are stewards of these brain-development basics—the same ones that took 3000 lives during those few breathless moments two sleek airliners slipped into the glass sides of New York City's twin towers. The same unwashed human dynamic we indulge every Civil War weekend, the so-called warring between our Ducks and Beavers.

A healthy male environment is a carefully kept one. When we dads and uncles, when our teachers and coaches, fail our adolescents' fundamental need for masculine approval, the gap will be quickly, cynically filled.  Maybe by good men, but more likely bad ones. Maybe by real guys, but just as likely by online or video game ones.  Imagine our boy Mo-Mo's buzz, when those undercover FBI guys replied to his cyberspace rants.

Anger about all this, about Mo-Mo getting trained and supplied by a team of Justice Department operatives, is misplaced. What they did is as old as history, as profitable as NCAA athletics, as irresistable as US military adventures.

The shame of it all, after all, is on us men: missing in our households, absent from our school buildings and school yards. Good men balancing our bad extremes.

The imbalance manifested in the case of the United States of America v. Mohamed Osman Mohamud, can be corrected. There's a familiar refrain in all our neighborhoods, mainstream and ethnic stream alike: "Hey, wait a minute. He's—just—a kid."

It is not an excuse for a boy's irresponsibility, it's a red flag for adult intervention.