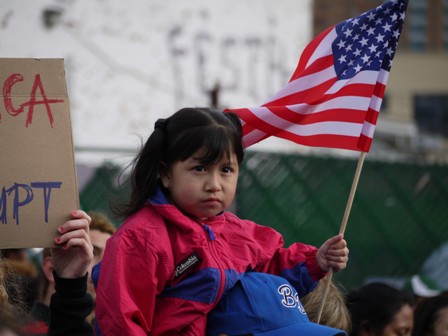 Langston Hughes once wrote in his poem, "Democracy:"  "I live here too. I want freedom just as you."   This has been the cry of the estimated 12 million individuals presently living in the United States as so-called illegal aliens.  And with the 71 percent and 73 percent vote of Hispanics and Asians for President Barack Obama on Election Day, their voices are now being heard laying claim to the American dream.   For them, that is what this last election was about - voting with their feet for immigration reform and hoping that dream is at long last within their reach.

Many of these voters were drawn to America for economic reasons, some because of human rights abuses but once you are in these United States of America, it does not take long at all to understand what it feels like to be an American.   It is a sense that we who are born here tend to believe instinctively- freedom of speech, freedom of religion, liberty and justice for all.  When foreigners arrive on America's shores, they take these liberties seriously too.  This American creed calls out to them as they seek a better life for themselves and their children.  Most have broken no criminal laws yet many have violated US law to get or to remain here.  Yet it is clear from most authorities on the matter, that it has been this immigrant infusion of labor and creativity which has helped to make America great and is still needed now to help keep us competitive in this increasingly global economy.

The last general amnesty for foreigners overstaying or illegally entering this country was granted in 1986, a legacy of the Reagan Administration.   Potential immigrants had to prove that they had lived in the US continuously since Jan. 1, 1982 or that they had worked as agricultural workers between May 1, 1985 and May 1, 1986.  They also could not be convicted felons.   The law granted legal status to over 2.7 million illegal immigrants including 2.3 Mexicans out of an estimated 6 million in the country at the time, cracked down on employers who hired illegal workers and sought to secure America's borders.  It is worthwhile to note that at the time, many democrats and immigrant groups opposed the new legislation concerned that the strict rules on employers would limit employment opportunities for immigrant workers.

Years later critics of the amnesty program claim it only encouraged even more illegal immigration, while others point to our own insatiable desire for cheap, pliable labor as the culprit.  Some say that the most effective and efficient deterrent would be better economic opportunities in the countries that people flee.  This argument is supported by recent trends showing a reverse flow back to Mexico during the latest US economic downturn and the fact that an estimated 40 percent of those here illegally crossed our borders legally with a visa then overstayed their visit.   No matter the cause, today there are approximately 12 million more in America in need of similar relief.

George W. Bush's last effort to overhaul immigration laws meet with defeat in 2007. Given the re-election of President Obama, it now looks as if immigration reform is an idea whose time may have come again.  Republican Senator Lindsay Graham and Democratic Senator Charles Schumer have already began discussing new legislation for a comprehensive immigration plan.  Some Republicans have formed a super-Pac called Republicans for Immigration Reform to push the issue.  Even anti-tax advocate Grover Norquist and Fox News Sean Hannity are seeing the light of immigration reform.  I wonder what Nate Silver's probabilities would say.

Carrie Crawford is an attorney who practices immigration law.  She can be contacted at [email protected]