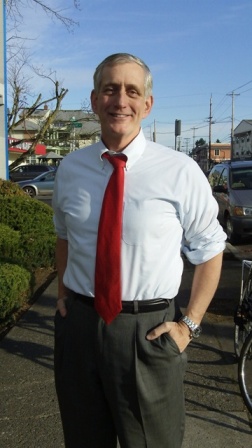 We can't remember the last time the race for mayor of Portland was so rocky. While both Jefferson Smith and Charlie Hales – and their primary race challenger Eileen Brady – are all obviously bright and committed to public service, somehow the entire mayoral campaign has been marked by scandals, untruths and negativity. This was especially heartbreaking during our recent endorsement interview with Smith, who has evolved into an articulate and knowledgeable advocate with more insight into the city's options for binding arbitration in the Police Bureau than anyone else we've spoken with. But the way Smith handled revelations of his past – repeated drivers license suspensions and a short list of violent encounters – by failing to simply own up to them when they first emerged in the news, showed that the gifted young lawmaker is not mature enough to handle the reins of City Hall at this time.

We are endorsing Charlie Hales because he has experience in Portland government, he represents bedrock progressive values and his priorities for the city – social justice, job creation and sustainability – are ones we can get behind. He has worked in both the public and private sectors, and to us this means Hales understands the needs of the business community as well as the potential for bureaucratic abuse of public resources. We believe Hales understands how to get things done.

Similarly, we endorse Amanda Fritz for City Commissioner. Fritz spent years working her way up as a community organizer even though she already had a career in health care; and she didn't give up when the going got tough. Fritz' dedication to the City of Portland shines through in the dogged way she has weathered sexist insults about her effectiveness in office – criticisms we believe to be unfair and unfounded. Fritz' success in bringing about the Office of Equity with a unanimous vote of her peers despite a punishing round of media criticism rallies our own faith in the power of a compelling idea. We want Fritz to have another four years in part to see what more she might accomplish before retiring from the Council, which she has said she plans to do.

Judge of the Court of Appeals Tim Volpert